U2 frontman Bono has been involved in charities since the 1970’s and continues to give resources to save at-risk children, conservation, and is putting the poorest first. 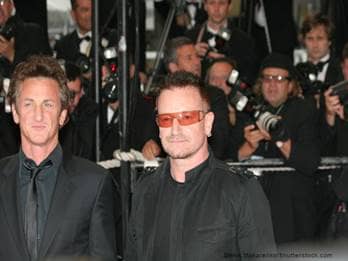 U2 frontman Bono has been involved in charities since the 1970’s and continues to give resources to save at-risk children, conservation, and is putting the poorest first. Born Paul David Hewson, the rock star founded the Debt, AIDS, Trade, and Africa in 2002 and it’s has been a whirlwind of contributions for years.

The focus was to fighting for justice for the voiceless in Africa, cutting down the countries, debt, and helping the poor in Africa receive medication. Bono also has raised public awareness by working with political leaders in Africa to help build schools, fight AIDS, and help give medication to AID sufferers. He has done this through ONE—an organization Bono co-founded.

One is funded by various companies like Apple and the Bill & Melinda Gates Foundation—One reported.

“You see, Africa makes a fool of our idea of justice. It makes a farce of our idea of equality. It mocks our pieties. It doubts our concern. It questions our commitment. Because there is no way we can look at what's happening in Africa, and if we're honest, conclude that it would ever be allowed to happen anywhere else.”

Bono’s philanthropic journey started after seeing a show for Amnesty International in the late 1970s. He contributed to other charities offer his voice for the group “Band Aid,” which raised money from the Feed the World track to feed those starving in Africa. Bono has also won the Noble Peace Prize, crowned Person of the Year by Time, and has been given an honoring knighthood by the United Kingdom in 2007.

What else can motivate Bono? You might be surprised what the Irish rocker said.

“You know, what you put out comes back to you-- an eye for an eye, a tooth for a tooth, or in physics—in physical laws—every action is met by an equal or an opposite one. It’s clear to me that karma is at the very heart of the universe. I’m absolutely sure of it. And yet, along comes this idea called grace to upend all that as you sow, so you will reap” stuff. Grace defies reason and logic. Love interrupts, if you like, the consequences of your actions, which in my case is very good news indeed, because I’ve done a lot of stupid stuff.”

But there is more, Bono also believes that Jesus is the son of God.

In a Christianity Today in 2013 interview Bono shared about what the concept of accepting Christ was about. He admitted it is a bigger vision—not a preposterous idea.

“When people say, you know, "Good teacher," "Prophet," "Really nice guy,” this is not how Jesus thought of Himself. So you're left with a challenge in that, which is either Jesus, was who he said he was or a complete and utter nut case. You have to make a choice on that. And I believe that Jesus was, you know, the Son of God. And I understand that ... we need to be really, really respectful to people who find that ridiculous and preposterous.”