B.B. King’s influence became legendary and opening the doors for blues to cross over to mainstream. His legend will live on for generations to come. 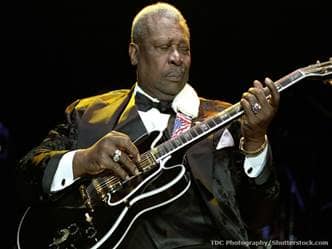 The world said goodbye to the “King of the Blues” in 2015. Riley B. King died due to complications from diabetes in a Las Vegas hospital and played his beloved guitar Lucille in front of crowds until he passed. B.B. King’s influence became legendary and opening the doors for blues to cross over to mainstream. His legend will live on for generations to come--and his music will live on forever.

King was the son of a sharecropper, and was born on a plantation in Mississippi. He sang in church and performed where he could. His pastor encouraged a young King to play guitar and he never stopped.

King later joined the Army and came back from WWII to work as a disc jockey in Tennessee where he was nicknamed "the Beale Street Blues Boy. Eventually, his name was shortened to "B.B.” before inking a record deal with RPM Records in 1949, and enjoyed a long relationship with the company over a decade.

He garnered hits like “You upset me Baby,” “Sweet Sixteen,” “Lucille,” and the “Three O’clock Blues.”

Surprisingly, some didn’t admire King’s way of the blues.

"Blues purists never cared for me. I don't worry about it. I think if it this way--when I made 'Three O' Clock Blues', they were not there,” King who was honored at the Rock Hall and Roll of Fame in 1987.

“The people out there made the tune. And blues purists just wrote about it. The people is who I'm trying to satisfy,” he declared.

King always wanted to be a better musician—he wanted to push himself further there were more sounds to be created. But he also never tried to be anyone else, but B.B.

He said he always had to work harder than other players.

"It seems like I always had to work harder than other people. Those nights when everybody else is asleep, and you sit in your room trying to play scales. I just wonder where I was when the talent was being given out, like George Benson, Kenny Burrell, Eric Clapton ... oh, there's many more! I wouldn't want to be like them, you understand, but I'd like to be equal, if you will."