Most Inspirational of 2015 – Angelina Jolie

Actress Angelina Jolie continues to serve abroad in her charity work since meeting disabled children in war-torn Cambodia during the filming of "Tomb Raider" in 2001. She continued to advance her mission, and more in 2015 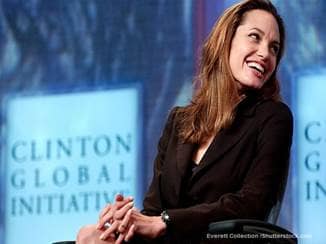 Actress Angelina Jolie Pitt continues to serve abroad in her charity work since meeting disabled children in war-torn Cambodia during the filming of "Tomb Raider" in 2001 in Cambodia. She was so moved from the children  that were in need--she started to reach out.Jolie has sent over five million dollars in humanitarian aid ((Maddox Jolie-Pitt Foundation)to The UN Refugee Agency. Money goes to building schools and helping displaced people.

Her global charity  continues to help many refugees, and works to ease suffering through donating her earnings, and becoming an advocate to the voiceless. Jolie’s charity work is often overshadowed by her fame and the constant headlines about her relationship with husband Brad Pitt. This has not slowed her down. The list of countries she’s visited to hear the voices of those suffering seem almost endless, so has her inspiration to so many overseas and at home in the US.

She has been to Pakistan, Thailand, Ecuador, Kosovo, Sierra Leone, Tanzania, Kenya, Namibia, Sri Lanka, Jordan, Egypt, New Delhi, Costa Rica, Chad, Syria, Iraq, and Haiti. When she is on her mission trips, she shares the living conditions with those also working and serving, according to published reports.

“I think we all want justice and equality, a chance for a life with meaning. All of us would like to believe that if we were in a bad situation, someone would help us,” she said.

Appointed Goodwill Ambassador for UNHCR in 2001 the director and writer has visited over 40 countries, and was appointed as the United Nations High Commissioner for Refugees three years ago where she, again, represents those perishing from war. She attended the World Refugee Day in Washington, D.C.,  in 2015, and has talked in front of Congress regarding the turmoil of  the displaced people.

Jolie wrote a piece on the Syrian refugee crisis that was published in the UK. Concerned that there needs to be more done to alleviate the suffering. Jolie said she was encouraged about the countries allowing the refugees to cross its boarders, and neighboring countries should absorb the refugees as well from Syria.

But it is not enough the Oscar winner shared.

"Syrians are fleeing barrel bombs, chemical weapons, rape and massacres. Their country has become a killing field. It should come as no surprise that people who have endured years of war, or who have been living in refugee camps on dwindling rations, are taking matters into their own hands."

She went on to write that the situation is about universal human rights. This transcends religion, race, or culture—the human race can do much more than what has already been done to aid these people fleeing from war.

“We should not be reaching for the lowest common denominator in our response to the refugee crisis, but striving to live up to our highest ideals. Every country in the world, not just in Europe, must be a part of the solution."