Most Inspirational of 2015 – Jackie Collins

The literary world and romantics lost a prolific writer in Jackie Collins who bravely fought breast cancer and passed in 2015. 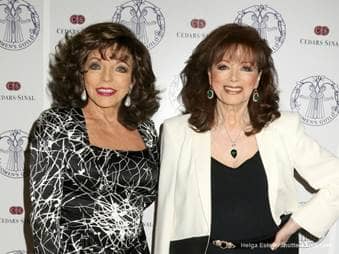 The literary world and romantics lost a prolific writer in Jackie Collins who bravely fought breast cancer and passed in 2015. She wrote 30 books selling over 400 million copies worldwide making her the ultimate escape for the lonely heart. Books like Hollywood Divorces, Hollywood Wives, and Deadly Embrace were just some of the steamy novels. One novel was so “hot” it was banned in Australia.

The World Is Full of Married Men was her debut book, and she was criticized for such filth. Collins took it stride saying “Thank you.” Her new book, The Santangelos, came out in June 2015.

“I write about real people in disguise. If anything, my characters are toned down -- the truth is much more bizarre,” who seen eight of her novels adapted for film and television.

Collins was born in London, but moved to the states to live with her sister Joan in Hollywood. She became a citizen in 1960. Her father was a theatrical agent, and she admitted she raise herself during an interview with The Huffington Post.

“I was a middle child who nobody paid any attention to.”

The world did notice and Collin’s career continued to soar as she made her way though Hollywood and remained focused her dreams.

“If you want to achieve your dreams, you must follow them, and the best way to follow them is not to think about wanting to be very rich, but to think about doing something that you really want to do.” Collins kept her health battles a secret and told PEOPLE there are no regrets.

"I did it my way, as Frank Sinatra would say. I've written five books since the diagnosis, I've lived my life, I've travelled all over the world, I have not turned down book tours and no one has ever known until now when I feel as though I should come out with it."

Collins continued to live life without limtiations and live the best she could until the end.