Most Inspiration of 2015 - Taylor Swift

Taylor Swift connects with people on an individual level and makes sure that she’s leaving the world a better place one person at a time. 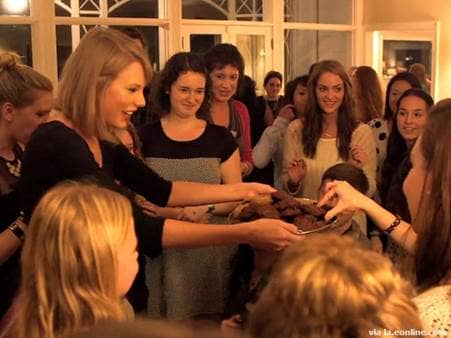 She’s sold more than 40 million albums, has more than 130 million single downloads, and is one of the top five music artists with the highest digital sales – and she’s also conquered the country and pop charts. Guess what else, she’s only 26 years old. We could only be talking about the beautiful and talented Taylor Swift. At the young age of 14, Taylor and her family moved to Nashville, Tennessee and so began her successful singing career. Her third single, “Our Song,” made her the youngest person to single handedly write and perform a number one song on the Hot Country Songs chart.

Despite the fame and attention, Taylor has managed to maintain a humble and responsible demeanor. She has said in various interviews that she believes it’s her responsibility to be conscious of her influence on young fans. Her gracious personality is even represented within her ties. From Selina Gomez to Ellen, everyone loves Taylor Swift. She even maintains a close relationship with her fans. It’s not out of the ordinary for Taylor to reach out to a fan and make their dreams come true. But, fan or no fan Taylor reaches out to those near and far with her philanthropic endeavors.

Year after year, Taylor is named one of the most charitable celebrities – and 2015 is no different. Swift donates auctionable items on a regular basis, and is active in Elton John AIDS Foundation, UNICEF, Oxfam International, and Habitat for Humanity, MusiCares, and Feeding America. Unlike many other humanitarian contributors, Taylor doesn’t have one charitable focus. She supports any organization that is making efforts to make the world a better place. Dosomething.org chose Taylor, for the second year in a row, as their most charitable person of the year for 2015. The proceeds of her number one hit “Welcome to New York” were also given to NYC’s public school system. As if that contribution wasn’t enough, Taylor also donated hundreds of thousands of books to public libraries in New York to help spread literacy.

In just 2015, Taylor has donated over $150,000 to fans, children and families in need. Of that $100,000, $50,000 was donated to an 11-year-old fan battling acute myeloid leukemia. The fan, Naomi, made Taylor’s “Bad Blood” song her own personal fight song against cancer, and the connection struck a connection with Swift – she made the donation on Naomi’s GoFundMe page. Naomi’s parents had purchased her tickets to see Swift in concert but her condition made kept her from seeing the concert. The pop star found out the news and wrote Naomi a special message that said, “To the beautiful and brave Naomi, I’m sorry you have to miss it, but there will always be more concerts. Let’s focus on getting you feeling better. I’m sending the biggest hugs to you and your family.” The note came along with the very generous $50,000 donation.

But, wait that’s not all. Taylor also gave $1,989 to a fan who was struggling to pay off her student loans and another $15,000 to the family of Texas firefighter Aaron VanRiper after a terrible car accident. Last Christmas, the philanthropist even sent and delivered personal holiday gifts to her most loyal fans.

Taylor Swift goes above and beyond. Her philanthropic attitude exceeds your average needy organization. Instead, Taylor connects with people on an individual level and makes sure that she’s leaving the world a better place one person at a time.