Mandela Lives On - 8 Things I Learnt from Madiba

Here are eight great lessons we can learn from the late, sometimes controversial hero Nelson Mandela. 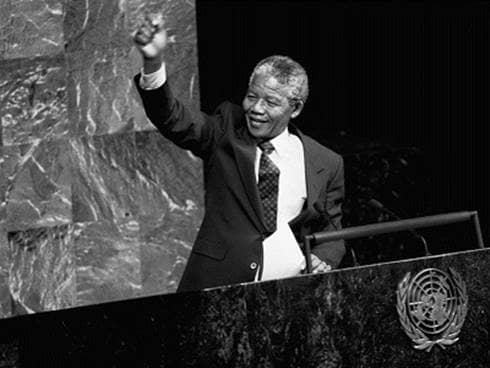 A nation mourns. The event we dreaded yet knew was inevitable has finally dawned on us. Mandela has fallen.

I remember distinctly the day Nelson Mandela was released from Victor Verster prison. Who could forget? I was a mere child yet young enough to know something significant was happening. Much of what I knew about him was myth and encumbered by ignorance and fear. I was a white child after all.

I grew up in tumultuous times of uncertainty, stress and change. It was not easy for anyone.

The nascent democracy was made accommodating and digestible by the leadership of the great man, affectionately known as Madiba. He bridged the great divide between black and white, and brought hope to the masses. He was a peacemaker, and what truly healed the hearts of many white South Africans was the day he wore a Springbok blazer at the Rugby World Cup Final held at Ellis Park. South Africa’s white pride and national sport, almost a religion to many Afrikaners, was embraced by a black men who had suffered for 27 years in deprivation behind bars. The Springboks won that historic day, and one felt that Mandela had created a revolution in the hearts of even the most staunch Afrikaners.

Mandela was not perfect. He was not quite the messianic figure often portrayed in the media. He did not choose a soft, peaceful resistance to the violent Afrikaner regime at the height of apartheid. He was a leader who was willing to sacrifice himself for the cause, and paid dearly with 27 years’ of his life incarcerated in prison in sparse conditions, sometimes brutal. At times, he was placed in solitary confinement in times that could have changed him. He did not change. He become bigger, more and more magnanimous, and weary of the darkness of oppression that shuns light. The greater his suffering, the greater his awareness of the human condition, and ability to transcend colour, and become a father to all South Africans, and a figure of great importance on the international stage.

Mandela became a symbol of freedom and resistance to enslavement and oppression. The “Free Mandela” campaign became something larger than life, taking on a life of itself, and putting the freedom struggle in South Africa on an international stage. Yet, of course, Mandela was a human being, not a saint.

“A man who takes away another man’s freedom is a prisoner of hatred, he is locked behind bars of prejudice and narrow-mindedness… The oppressed and the oppressor alike are robbed of their humanity.”- Nelson Mandela, Long Walk to Freedom

I remember the only time I came face to face with Mandela. It was when he was already President in the mid-1990′s. It was in a shopping mall. I was at first taken by his height. He towered above most. His eyes spoke of kindness and compassion. Many shoppers rushed towards him, yet his movements remained graceful and slow. It was an amazing time to stand before a legend.

Without Mandela, I’m not sure where South Africa would be now? Resistance to change was a great barrier to overcome. Despite and because of the winds of change blowing, there was chaos in the air, and violence stirring. There were leaders amongst the ANC and Afrikaner right-wing calling for more violence. In many ways, Mandela was a miracle as he brought calm, vision, compassion, and softness to a fiery situation that could have gone horribly wrong. Mandela showed the way.

Mandela’s philosophy will stand the test of time.

“Poverty is not an accident. Like slavery and apartheid, it is man-made and can be removed by the actions of human beings.” – Nelson Mandela

Mandela stood for something far greater and grander than just freedom . He stood for equality for all.

“I have fought against white domination, and I have fought against black domination. I have cherished the ideal of a democratic and free society in which all persons live together in harmony and with equal opportunities. It is an ideal which I hope to live for and to achieve. But if needs be, it is an ideal for which I am prepared to die.” – Nelson Mandela in 1964 at his trial for treason and sabotage.

Mandela died on Thursday December 5 2013 having lived an extraordinary life. It is hard to even imagine how much he experienced in his 95 years. The world stands together in mourning Mandela.

Our Father, Our Hero has fallen.

8 Things I learnt from Madiba:

After 27 years in prison, you could have forgiven Mandela for hanging up his boots, he was now over seventy, well into retirement age. Instead being the leader that he was, he went on to become South Africa's first democratically-elected President.

Mandela did not give up on democracy throughout his years in prison. The Apartheid Nationalist Party continually applied pressure on him to surrender or they tried to pacify him. He was unwavering. He stood the test of time, and emerged triumphant.

27 years of prison did not define Mandela. It strengthened his will. He let his past guide and teach him to be even greater.

You could have forgiven Mandela for feeling some acrimony particularly towards white Afrikaners. Instead his assistant when he was President was a white Afrikaner. He sat down for lunch with his jailor. Whoever the enemy is perceived to be, they are still a human being. He spoke of peace and actively promoted forgiveness and reconciliation.

5. Remain true to your principles.

Mandela was polite to his jailers in prison, and remained graceful and equanimous even in the toughest times. Mandela set an example and was willing to sacrifice a lot for his cause.

Mandela never wavered in standing up for his beliefs (justice, freedom and morality).

7. Pain and suffering can be our greatest teacher.

How many people would choose 27 years of incarceration so that they could fulfill their dream? Mandela transcended his brutal experience of deprivation through maintaining focus on his soul's purpose. An ancient teaching has been passed down - “the world is a teacher to the wise man and an enemy to the fool.” Mandela's imprisonment years were bearable because he had a meaning for it.

8. They can take everything away from you, except your spirit.

Mandela's indomitable spirit was never broken even after long lengths of solitary confinement. His oppressors could not break the man. That says a lot for who he was as a human being.

David G Arenson, ND is the founder of Shambhala Retreats. A Naturopath, Intuitive Healer and Transformational Coach, David writes and educates people internationally at some of the world's leading retreats and resorts. Born in South Africa, his work has taken him to Australia, USA, Middle East, Asia, Caribbean since 2002. A lover of wisdom and master healer specializing in holistic wellness, his retreats and wellness programs are focused on transformation. David is committed to inspiring and empowering people to live the lives of their dreams. David's mission via Shambhala Retreats is to guide people to places of mystery and power to rediscover, balance and ground themselves. To read more visit: http://www.findshambhala.com