Louis Zamperini - Much More Than the Underdogs Hero

Before the movie, Zamperini decided to write about his life with the hope that his efforts could help others. His long time friend, and co author of Don’t Give Up, Don’t Give In, David Rensin believed that Zamperini’s story of heroism was truly inspirational. 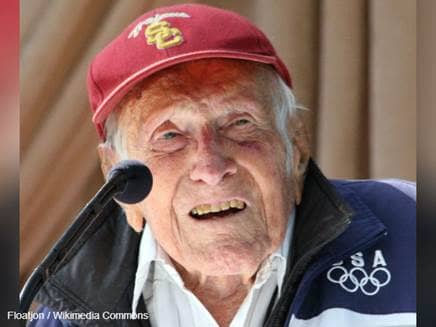 If one person is brave enough to share their story with the world – their struggles, hardships, overcome and resolutions, a lot can be gained and lives can be changed. Louis Zamperini is one of those few souls that touched the lives of many with his courageous tales of triumph. Zamperini’s life will soon hit the big screen, as Angelina Jolie directs the movie Unbroken that highlights the trials and tribulations that he lived through.

Before the movie, Zamperini decided to write about his life with the hope that his efforts could help others. His long time friend, and co author of Don’t Give Up, Don’t Give In, David Rensin believed that Zamperini’s story of heroism was truly inspirational.

“We wrote the first book and we were excited and then Louie said he had more stories to touch on. They show you a lesson but don’t go out of the way to teach you a lesson – so he wanted to frame his experiences, “ said Rensin. “The second book takes the stories from his life and frames them as lessons. They were written with the intent that these are lessons and to draw from what you’ve had.”

Don’t Give Up, Don’t Give In provides readers with advice on living life and Zamperini talks about the tales of his adventures and ordeals before, during, and after the war. “Clearly his relationship with God defined his life. That moment where he turned it all over, he was able to stop drinking, fighting and hating and started forgiving and stopped having nightmares. He depended on God’s presence. From the beginning he was never pushy. He had a very sensible approach,” said Rensin.

In his book Zamperini ends by saying, “As I’ve always said: All Things work together for good. I’m ninety-seven years old and, like everyone else, a little afraid of death because no matter how old you are you’re always making plans and you don’t want to be interrupted. I feel as if I’ve already lived two hundred years, but I wouldn’t mind two hundred more just so I can keep doing what I’ve been doing: helping the underdog. That’s been my program. That’s been my whole life. I’m a thankful citizen of American who just wants be remembered for his charitable heart.”

I think it’s safe to say that Louis Zamperini, our hero, will be remembered as more than a charitable heart helping the underdog.