Kevin Hart’s mother saw the talent within her son and agreed to pay Kevin’s rent for a year while he worked his way through show business. 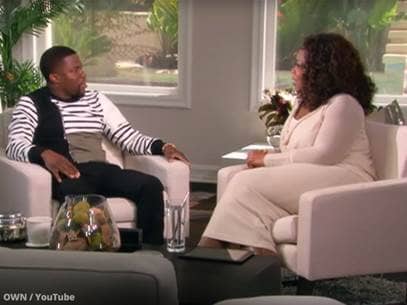 Comedian and actor Kevin Hart has a lot to be proud of. He’s starred in a number of successful films and is considered one of the best comedians in the biz. Before he was a star, there was one person who always had Hart’s back – his mother.

In an interview with Oprah Winfrey, Hart discussed his first days starting out as a comedian. Hart and his brother were raised by his single mother Nancy Hart. His father Henry Robert Witherspoon, a cocaine addict, was in and out of jail throughout most of Kevin’s childhood. Kevin would use his natural ability to make others laugh as a coping mechanism to deal with his family’s dark times. His comedic approach helped him stay out of trouble and became a passion that Hart wanted to pursue. Hart’s approach was to paint a picture as a story teller and be honest. He believed that having that persona would be his gateway into comedy while being relatable.

Hart’s mother saw the talent within her son and agreed to pay Kevin’s rent for a year while he worked his way through show business. She told Hart that she wouldn’t be a dream killer and gave him a year to make his dreams come true.

Despite the small success during his first year of comedy, Hart was running low on funds and asked his mother about the contribution she agreed to pay. His mother’s only response was, “Have you been reading your bible?” Hart told Oprah that he would tell his Mom that he didn’t have time to talk about religion and really needed the rent money. To which his mother replied, “When you read your Bible, then we’ll talk about your rent.”

These conversations went on for weeks on end, until Hart eventually received an eviction notice on his door. With nowhere else to turn, Hart decided to take his mother’s advice and open up his bible. Hart told Oprah, “I go home and say, ‘Man let me open this Bible up.’ Open the Bible up, six rent checks fell out. She put all my rent checks in the Bible.”

Hart was shocked, surprised and relieved. At that moment he realized that his mother wanted is for her son to have faith. She believed that it was important for Hart to stay faithful along his journey into stardom. Her heartfelt gift changed Hart’s perception of faith and his outlook on the world. Throughout Hart’s stand up routines, he makes reference on occasion to his “overly religious” mother and how she blamed all evil happenings and misfortunes on the devil. Hart’s mother died from cancer in 2007.