Erin hopes that the book will serve as a testament to those who have dealt with controversy or an obstacle that seemed like it couldn’t be overcame. “My hope is that people will see God’s strength displayed through us and as a result they live more courageously and through their weakness they look to God," said Erin. 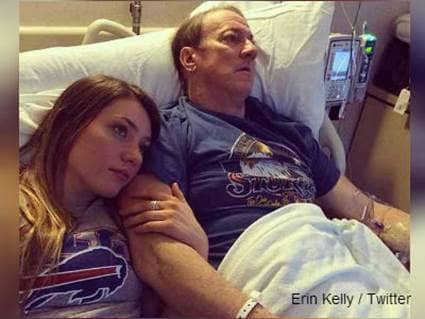 Millions of fans all over the world were touched by the photo Erin Kelly, the daughter of NFL legend Jim Kelly, posted on social media. An arm in arm image of Erin and her father touched the hearts of millions. Jim Kelly, at the time, was fighting a battle against cancer – and now thankfully, is cancer free. Erin Kelly, alongside her mom, wrote Kelly Tough – a book about the struggle her, their family and Jim Kelly went through.

The image shared on social media, was a sign of comfort and hope to not only the Kelly family but others who were or have dealt with cancer. “I had no idea how many people would react. My mom and I are very active on social media and hesitant with putting things out there. We still don’t put all of the details out there, we wanted to show the realness of the family and we wanted people to pray,” said Erin. “Social media was our way of getting people to rally behind us and encourage others. We share the hard parts and the things that God is doing and that he is hearing my dad. Didn’t know how many people would gravitate to our story - overwhelming but truly humbling.”

The phrase 'Kelly Tough' began when Jim Kelly was a child – it was a phrase that his dad used frequently. When Jim became a parent he often used the phrase as a sense of motivation and encouragement to his children. Erin says that it wasn’t until her dad was diagnosed with cancer when she finally appreciated and understood what 'Kelly Tough' meant.

“It’s not about the Kelly family; it’s about finding your strength in God in the mist of weakness. I started to live by this mentality that no matter what I am going to put my faith in Christ alone and we started sharing that with people,” said Erin. “We all have our own story and it really is an encouragement for people. Through Kelly Tough and watching my dad go through cancer, I have been more fearless because of it. I am going to live abundantly with time that Christ has given me. We didn’t know if he was going to be around. Time was huge when you don’t know how much time you have left. You have a fearless mentality.”

Erin hopes that the book will serve as a testament to those who have dealt with controversy or a challenging obstacle. “My hope is that people will see God’s strength displayed through us and as a result they live more courageously and through their weakness they look to God. They want to share the hope that we have. They see Christ displayed through us and motivated to live more fearlessly,” said Erin.

Erin Kelly is the oldest daughter of Jim and Jill Kelly. She has always had a passion for writing, journaling, and sharing her faith. A sought-after speaker to young women, Erin has co-authored five books with her sister, Camryn. She attends Liberty University in Lynchburg, Virginia.