Karen Kingsbury Let's Us in on her World

Not only is Kingsbury America’s favorite inspirational story teller, but her a dozen of her novels have resonated with a number of readers - one of those readers being Roma Downey. 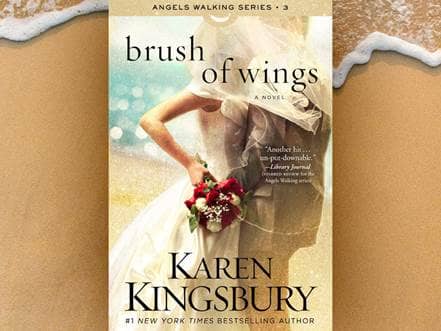 New York Times bestselling author Karen Kingsbury has more than 25 million books in print. Not only is she America’s favorite inspirational story teller, but her a dozen of her novels have resonated with a number of readers. One of those readers is Roma Downey. While many of Karen’s books have been the subject of Hallmark movies, Downey is teaming with MGM studios to develop a TV series out of 22 of Karen’s line of Baxter Family books. You may wonder where does the talented writer find the inspiration to write and how does she make it all look so easy. Well here’s the rundown.

What do you do or where do you find the inspiration for the characters and story lines for your novels?

God gives me inspiration from a number of places - always different. Sometimes it will be in a conversation with a stranger, other times from a sermon or something I see on the news. Usually there is a very real issue at the core of that moment, and within that issue is an element that brings tears to my eyes, a hardship or difficulty that touches my heart. From there, my imagination kicks in and I can feel God weaving together a story. Some fiction authors call this the "what if" game. What if someone with a particular disability wanted to climb that sort of mountain? And what if she had left the love of her life behind? And what if her father had left the family when she was little and now he regrets that decision, and what if he was trying to find her? And so it goes. For me it's more of an internal conversation with God. And always He's in the lead.

You’ve written a lot of books and developed a lot of different characters. Is there one or two characters in particular that are your favorite? If so, why?

Ashley Baxter from the Redemption series and all the Baxter books that follow will always be a favorite of mine, probably for the same reason she's a favorite for my readers. She was a rebel in her younger days. The tenets of faith and family that came so easily to her siblings and parents, were very difficult for her. She took the longer, more rocky road through life, but in the process she found the very richest meaning, the most beautiful love. I think we all have a bit of the black sheep in us. We are all flawed and in need of unconditional love. Ashley let the readers and me walk out that journey together. I also loved Jamie Bryan - wife of Jake Bryan - in my book One Tuesday Morning. She, also, was not a believer at the beginning of the book. She had decided she could not believe in God as long as there were firefighter funerals. Then 9-11 happens. Two men with an uncanny resemblance are in the same Twin Tower that fateful morning, but only one comes out alive. For many believable reasons, Jamie thinks that man is her husband. And so begins a walk of faith that changes Jamie at her very core. I love her journey and transformation in that book.

There is a lot of buzz circulating around your Angels Walking series. For those who haven’t yet read the books, can you give us a rundown of the story and what readers will gain from reading?

I was amazed at the fascination by so many readers to the dark side of the supernatural world. So on a flight during a book tour I began dreaming up new books and I wondered: Why aren't there more books about the light side of the supernatural? I thought about a series of books where each one begins with a town meeting in heaven. A very serious town meeting. A lead angel would assess his team and choose a pair to handle a very desperate mission on earth. Then those angels would be assigned to work clandestinely in the situation on earth - something I called Angels Walking. These Angels Walking missions would connect over the course of three books while the angels followed four young adults and the trials and triumphs and even tragedies they faced together. Hebrews 13 tells us to be careful to entertain strangers for in doing so, some have entertained angels without knowing it. This tells us that angels are not only real, but they look like us. They interact the way we might interact. Sometimes they bring a message of hope. Other times they assist in a rescue. But always they do God's bidding - and that is the case with these books. After reading the Angels Walking series, people tend to be more aware of the supernatural ways God is working around them. Readers are resonating with this series because they walk away more certain that God loves them, more sure that He is working behind the scenes to help them, and that sometimes He might even send an angel on their behalf.

Did you ever encounter any naysayers along the way? And if so, what would be your advice to others who receive negative feedback when they’re venturing to reach their dream?

I wrote four true crime books and four collections of miracle stories between 1989 and 1996. But at that point I knew I wanted to write fiction. There was a problem. I had no publisher or agent interested. So I wrote the novel on my heart - Where Yesterday Lives. Then I began submitting the manuscript to New York publishing houses and one after another I received prompt rejections. One editor - who had published my true crime books - said "I really loved it. I laughed and cried. But there's no sex or language, so I wouldn't know what to do with it." Which is crazy ... but how a secular publisher thought back in the day. I literally got on my knees and begged God to let me write stories for Him. That search led me to read Francine Rivers' book Redeeming Love and eventually to submit my manuscript to her publisher at the time - Multnomah. My first book deal came a year later. During that time, though it was difficult, I never felt truly discouraged. I can't say I ever encountered naysayers except for my first agent - the one who represented my true crime books. He told me, "Karen ... why would you want to write that Christian stuff. You were going to be a star." I've never forgotten the truth that with Christ, all things are possible. He alone gives me the stories and the ability to write them. If He is calling you to reach a certain dream, then go for it with everything you have. Because you can do all things through Christ who strengthens you!

What’s next? What other projects do you have in the near future?

Due to popular demand, on Easter Sunday, Karen Kingsbury's The Bridge - Part 2 will release on The Hallmark Channel. This is a Christmas movie, and originally Hallmark was going to wait to run Part 2 this December. But viewers complained at having to wait so long - and frankly, I don't blame them. I never saw it as a two-part movie. But Hallmark loved the story and wanted to tell it in two parts. So that will air on Easter - March 27th. Then in October, I will release the first book in a new collection. It'll be a Christmas book and I can't release details until May!! Let's just say readers will be thrilled! In addition, I just announced a partnership with Roma Downey and MGM to develop 22 of my books into The Baxter Family TV Series. We're not sure which network or content provider will host this, but many are interested. I'm praying daily for Roma and her team to have wisdom as they move forward. I'm beyond thankful to be working with her, as she is not only a very talented producer, but also a beautifully kind believer. We are already great friends! Also, my family and I are going on tour on March 29 for the Karen Kingsbury and Family tour sponsored by Compassion International. We will visit 12 cities at the release of Brush of Wings, and we're all super excited. Kyle will give a full concert, and Sean will give his testimony - "From Haiti to Home". Kyle and Kelsey will share about their book "The Chase - Trusting God with Your Happily Ever After". I'll give a couple talks, and our son Tyler will lead worship. It will be a night when everyone in attendance feels like part of our family. We can't wait!

What is the one questions you’re always asked in every interview?

People tend to ask me how I do it all. They asked this especially when the kids were younger, but even still the look at my schedule and think I'm a little crazy. I agree, of course. But the answer is and always has been - Jesus. He gives me strength and wisdom to know what's most important. What is the next most important thing - is a question I ask myself and God all the time. Then I do that thing in His strength to the best of my ability. Books come and go, but I only get one chance to be a wife and mother ... and now a grandmother to little Hudson. He's 4 months old. So my faith and family have always come first. I try to involve my family as much as possible. Our family tour coming up is one of those examples. God has been gracious and kind over the years - again and again. No matter how busy and demanding my career, my family has always felt like it's something I do on the side. My oldest son Tyler - when he was 8 - once said to me, "Mom, when I grow up I think I'll be an actor and a writer and make movies." He paused, studying me for a minute. "But I think I'll also write books in my spare time. Like you do." Probably the greatest compliment I've ever gotten!