Is There Hope for Sudan?

Since 1956 there has been civil unrest in Sudan due to political, cultural, and social exclusion. The Comprehensive Peace Agreement was agreed on in 2005 signed between the Sudan People's Liberation Movement, a political group in South Sudan, and the government of Sudan. 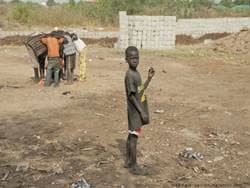 Since 1956 there has been civil unrest in Sudan due to political, cultural, and social exclusion.

The Comprehensive Peace Agreement was agreed on in 2005 signed between the Sudan People's Liberation Movement, a political group in South Sudan, and the government of Sudan.

Sudan’s politics is authoritarian, and despite the agreement, conflict continues in other regions of the country and borders.

People are caught in the suffering, starving death, and over three-million are displaced and live in refugee camps.

Darfur is in the western part of Sudan and borders on Chad and Libya and the government has not take the steps to end the genocide of its people by stopping Janjaweed activity.

Sudanese President Omar al Bashir has been accused of monstrous acts by the international community.

The International Criminal Court indicted Bashir in 2009 for mass killings, rapes, and civilians in the region. Bashir has been in charge for 26 years, facing little opposition in the April elections.

He was reelected with over 90 percent of the vote. There is still a warrant issued by the Hague court for the Sudanese president since 2010.

Political corruption is destroying the people, but so is disease, and lack of food, as farmers are forced off their lands, and killed. A recent outbreak of measles in Sudan is overwhelming many aid agencies as the UN and effort from the international community work to vacate millions. Aid groups met with the UN asking for 720-million dollars to deal with the crisis.

"Life-saving assistance is a priority.

As conflicts continue unabated in and around Sudan, the number of displaced and new refugees is unfortunately expected to increase,” UN resident coordinator Bin Malih on May 5, Voice of America reported.

Where can we find hope in such tragedy? Organizations like Hope4Sudan are working to meet the basic necessities of the people by digging wells, building medical clinics, feeding programs, and encouragement to those feeling forsaken by their own government. They also enlist health care providers to administer tetanus and medication for tuberculosis and oral polio.

The United States is the world’s largest donor to Sudan, contributing over a $1 billion in aid in April.

“If the money is eaten by a few, all the rest will go hungry, and a hungry citizen is an angry citizen. This is as true in the Counties and States as it is in Juba. ..in order to fight this endemic disease in the courts we must have the laws to do so. Until these laws exist, our hands are tied in fighting corruptees, while they betray our commitment to serve and provide services to our long-suffering people,” President Salva Kiir Mayardit of South Sudan said according to publish reports.