By understanding how real success is developed, you can become more stable and creative. Larry Osborne, author of Innovation's Dirty Little Secret, talks about the reality of success. 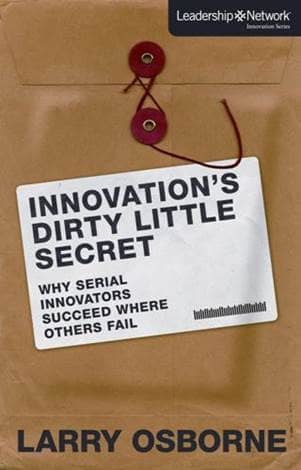 Pastor and author Larry Osborne discusses, in his new book Innovation's Dirty Little Secret, how failure can be your biggest aid when trying to achieve success. By understanding how real success is developed, you can become more stable and creative. Osborne discussed, with us, how to be an innovator.

Do you believe that you must fail first before you can succeed, or do you think that success is possible first try?

I don’t believe we have to fail before we succeed. It’s entirely possible to succeed on the first try. Think of the baseball player who walks up to the plate for his first major league at bat and hits it out of the park. He clearly succeeds before failing. But make no mistake. That’s rare. It won’t be long until he strikes out. No one ever hits a homerun every time. Shoot, no one even hits a single every time.

It’s the same with leadership. Failure isn’t necessary. But it is inevitable. No matter how successful someone or something may be right out of the chute, eventually failure will rear its ugly head. It’s unavoidable. It always shows up.

Successful leaders and serial innovators aren’t surprised by failure. They expect it. They’re well prepared for it. And contrary to what many people think, it’s not their ability to avoid failure that sets them apart – it’s their ability to minimize the impact of their failures.

That’s because they take failure seriously. They know that even with the best of ideas, the odds of failure are high. So they don’t oversell or seek organization-wide buy in on the frontend. Instead, they use the language of experimentation. They try lots of things. But they change very few things. This way, when something doesn’t work out, they can quickly shuck it off as a failed experiment without losing their credibility or leadership chips.

How does corporate culture impact the success or failure of an innovation?

Corporate culture has a huge impact upon innovation. Some cultures foster it. Some accelerate it. And some kill it off at first sight.

Corporate culture is simply the sum total of an organization’s actions. It’s what we value and how we behave. It doesn’t always match up to the slogans on the wall. It matches up to what we do.

In fact, many pundits have noted that the policies down the hall always trump the vision plastered on the wall, Behavioral patterns are hard to break. Corporate culture always wins. The worst corporate culture for innovation is a highly risk-averse organization. Ironically, excessive risk aversion is most commonly found at two opposite ends of the spectrum: organizations that are highly successful and those scarred by a history of major failures.

One says, “We never fail – it’s unacceptable.” The other says, “We can’t fail again – it might kill us.” Though they come at it from different angles, both unwittingly lock out future success by trying to eliminate any chance of future failure.

It’s easy to recognize excessive risk-aversion. The telltale mark is an obsession with data and facts. Risk-averse organizations always want one more study. They always need just a little more data. Before giving the green light to a new idea, they want absolute proof that it will work. But that kills innovation. There is no way to come up with enough hard data or proof that something that hasn’t been done before will work. At best we can show a decent probability of success.

This is why risk-averse organizations always end up success adverse. They resist change and innovation until it’s too late. Only after everyone else has adopted something do they have enough proof to move forward.

There are also cultures that foster innovation. They’re the hotbeds of creativity and cutting edge programming.

You can recognize them by their radically different response to a new idea. Instead of saying, “Prove it,” they start out by saying, “Why not?” They look for reasons to say, yes, rather than reasons to say, no. They like to try things and see what happens. However, it’s important to note that this doesn’t mean that they try things on a grand scale. Corporate cultures that foster innovation try new ideas on a small scale. They experiment so that their failures can be jettisoned quickly. They don’t put the whole organization at risk to see if something will work.

If it’s not broken, should you still try to fix it? Or is that reading too deep into a scenario?

From my vantage point, if something isn't broken there's no need to tinker with it. Leave it alone as long as it’s working well. In most organizations too many things are genuinely broken to waste time fixing what works.

But at the same time, we must always remember that nothing succeeds forever. What isn’t broken now will be break eventually. And now is the time to start getting its replacement ready.

Wise leaders multitask. They focus on protecting the past (what’s working) while simultaneously creating the future. They realize that both are incredibly important to the long-term health of their organization. They know that the inherent tension between past and future is seldom resolved by ditching the past or by putting off the future. It’s not an either/or world; it’s both/and.

I find that impatient and impulsive leaders often cast aside what’s not broken far too early. They’re enamored by the new and novel. They prefer to chase after what they think might work tomorrow rather than toil away at what’s working today. They remind me of a Little League outfielder with ADHD. They’re easily bored by the task at hand. But the moment a butterfly flies by, they’re fully engaged – at least for a minute or two.

If something new and exciting hasn’t come along in a while, impatient and impulsive leaders tend to blow up what’s working just to bring some adrenaline to the party. Unfortunately, that eventually produces a confused organization where everyone wonders which priorities are the real priorities. And once everyone discovers that tomorrow’s priorities will be different than today’s, they will tune out in the knowledge that whatever the new agenda may be, “This too will pass.”

How does a great mission statement accelerate innovation?

A great mission statement has two characteristics: It’s focused and it’s honest. It’s focused in the sense that it clearly lays out a specific target that everyone can understand and aim at. It’s specific and concrete.

It’s honest in the sense that it describes what we’re genuinely passionate about. It’s not a collection of politically correct clichés, values, or goals. It’s a ruthlessly honest description of what we feel called to do and what we are most passionate about.

A focused and honest mission statement accelerates innovation because it makes it easy to decide what to pursue and what to ignore. There’s never a shortage of great ideas. But many of them (even if highly successful) will have no impact upon your mission.

Without a focused and honest mission statement, most organizations end up chasing after whatever succeeds instead of the things that advance the mission. Anything that draws a bigger crowd, makes the church grow, or brings in more money is considered a great success – even if it has nothing to do with advancing our stated mission.

A clear and concise mission statement keeps that from happening. By clearly articulating the target, it helps clarify what advances the cause and what doesn’t.

You suggest that leaders plan and innovate in pencil, why not use ink?

There is one thing I know for certain about the future. It will be radically different than I expected. That’s why I’m such a strong proponent of planning in pencil. It’s the only way I can be prepared for the inevitable midcourse corrections of life and leadership.

Leaders who plan in ink leave themselves little wiggle room. If everything is spelled out in detail (written in ink or set in concrete) it becomes incredibly difficult to alter course when faced with unintended consequences or changing realities.

Yet innovation and change always bring unintended consequences. If something has never been done before, there is no way to predict how things will play out. There are too many complexities and constantly shifting factors involved.

It reminds me of something an engineer at the Jet Propulsion Lab once told me about space exploration. Though brilliant engineers carefully plot the spaceship’s route, every journey involves millions of tiny (and a few major) midcourse corrections. Without them, the rocket would never reach its destination. There are simply too many variables to get everything right the first time.

Planning in pencil is the best way to make sure we can quickly make those kinds of midcourse corrections when necessary.

I am sure that many people ask you for advice everyday, what is the number one question that you are asked about innovations?

People are always asking me how did I know that a particular innovation or change would work out – especially those that were fairly radical at the time. Yet the truth is, when it comes to our most significant innovations, I didn't know if they would work out. I mentally modeled them in my head and I trusted what I could see in my mind’s eye. But I had no proof. There was nothing I could point to.

But we strapped on a parachute and charged down the runway anyway, trusting the mental model and hoping we weren’t missing anything significant. But don’t miss the part about the parachute. I always start out with an exit strategy in hand. It is just as important as my implementation strategy. Sometimes more so!

And…what question do you wish that potential innovators would ask more often?

That's simple. I wish more leaders would ask me how to design and prepare a viable exit strategy. Too often, Christian leaders assume that preparing for failure shows a lack of faith. So they try to not even think about it.

Instead, they tend to oversell their ideas with a sense of bravado and assurance. If they succeed, it gets everyone pumped up. But that doesn’t guarantee success. It just makes bailing out all that much harder and embarrassing – and it magnifies the negative impact if things don’t work out as planned.

Frankly, that’s why I wrote Innovation’s Dirty Little Secret. I wanted to help leaders push the envelope. And I wanted to help them do so in a way that would allow them to maintain enough chips and credibility to try again another day if their great idea turned out to be not so great after all.