A profoundly searching new novel by a writer of incomparable range, power, and achievement. 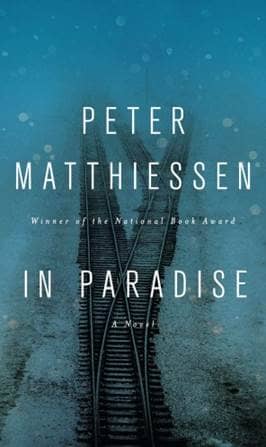 Excerpt from In Paradise By Peter MatthiessenHe has flown all night over the ocean from the New World, descending from moon stare and the rigid stars into the murk and tumult of inversion shrouding winter Poland.

From the airport, a cab takes him to the city and sets him down in an empty square where a row of buses, closely parked, stand side by side facing a wall; the cab is gone by the time he discovers they are locked. (The imprisoned air inside,  he thinks,  must  be even colder than this  outside weather.) At the corner café he is informed that buses to that destination won’t be available before spring, and that he has missed the morning train he would have caught had he been driven to the depot; there will be no other until evening.

At a loss, he drinks black coffee at the counter, scowling at the unshaven traveler reflected in the dirty mirror. His antiquated Polish is eked out by the primitive English of a young couple who have overheard his inquiries about hir- ing a car and boisterously endorse the waiter’s protest that the cost would be far too high. Concerned that a visitor to their fair land has been inconvenienced, they offer to escort him to that small museum he had mentioned: the waiter will keep an eye on his old suitcase. On the way he can admire the Royal Palace and cathedral on Wawel Hill and the St. Mary’s Basilica destroyed in the thirteenth century by Asian Tatars and rebuilt in the fourteenth with that strange crowned tower. “Like  black icicles!”  the girl cries.  Thus their guest can at least enjoy the historic center of Poland’s oldest city, still so beautiful, they say, because Cracow, like Paris, had been spared bomb and fire in the war. Pardon? Oh no, sir, they giggle, they have never been to Paris!

Exhausted, he trails his merry guides past the medieval Cloth House on the Market Square. Mirek and his love- struck Wanda will not let him visit this city he knows more about than they do without dragging him into a shop to find a souvenir of Poland “for delight your sweetheart in America.” Wanda supervises the selection of a silken lozenge of transparent amber. “Beauty gift for Mama!” This golden drop encasing flecks of ancient insects is the very essence of his  ancestral  earth, yet its  acquisition  further sinks his spirits. He knows no one who would have much interest in this scrap of fossil tree sap, never mind “delight.” He  has no sweetheart,  only a married lover he does not much miss—in fact, is rather glad to get a rest from—and no surviving family in the New World. Were they still alive, his father and paternal grandparents would have disap- proved this trip, having always warned him against returning to this  region of southwest  Poland just because  he happened to be born there. “You have no memory of that place, and our own memories are sad,” his father said.

Peter Matthiessen was a three-time National Book Award winner (twice in two nonfiction categories for The Snow Leopard, published in 1978, and again in fiction in 2008 for Shadow Country) and the author of more than thirty books, as well as a world renowned naturalist, explorer, and activist. A cofounder of the Paris Review, he was a member of the American Academy of Arts and Letters and a recipient of its William Dean Howells Award, a State Author of New York, and a recipient of the Heinz Award in the Arts and Humanities, among many other honors. A longtime student of Zen Buddhism, Matthiessen eventually became a priest of the White Plum Asanga. He lived for more than 60 years on the South Fork of Long Island, where he worked as a commercial fisherman in his twenties and died on April 5, 2014. For more information on In Paradise click here.