There are ways we can make this year for women and move forward on as a country. 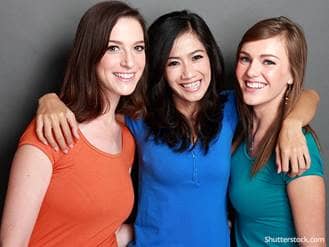 There are ways we can make this year for women better.Taking on  subjects like paid maternity leave, equal pay, ending stereotypes that women can’t excel in sport and science, and other archaic beliefs that society projects on women need to be thwarted.

Women have made tremendous strides over the last 50 years. They are leaders in government, becoming executives, astronauts, scientists, and breaking the glass ceiling in male-dominate sports. Here are five themes to look at and what we need to work on for future generations.

This is not all men’s fault. Women are biased against other women as well. If were’ honest, we know this, but why?

Women are built to survive, and if another woman is deemed just as territory-- evolutionary psychology. It just takes one mean girl or bully, to sour one against women in general.

Women fear exclusion more, and are “more sensitive than men to social exclusion, and when they feel threatened by the prospect of being left out, a woman's first response may be to socially exclude a third party. Again, for any woman who's been on the receiving end of a female bully, this will come as no surprise.”

The United States is considered a global leader in innovation and equally. When it comes to paid maternity, paternity leave, sick leave, and vacation days—there is a gap between us and the rest of the world.

The U.S. is ranked third along with Oman and Papua New Guinea! Political scientist told NPR in 2015: “Americans’ identify with the social class they want to be and what they really are, he offers. “Americans tend to have a bit more sympathy for business — after all, when we all own our own shops someday, we won't want our hands tied by any more regulations than absolutely necessary.”

The Family and Medical Leave Act of 1993 will allow unpaid leave up to 12 weeks for giving birth, recovery or taking care of a sick family member without losing their position.

We know we need to value women raising families, and the policies would be put into place to support them balance as this makes them better employees. In the 21st Century, we would think that there will be limited bias in the science world. Yale University’s study found (2012) that females were found to be less competent than male undergraduates with same skill sets and were less likely to be mentored by professors or offered jobs at the same pay scale. The biases were striking said Jo Handelsman, PhD, who was instrumental in the study.

“I think we were all just a little bit surprised at how powerful the results were — that not only do the faculty in biology, chemistry and physics express these biases quite clearly, but the significance and strength of the results was really quite striking.” Women were also just has biased against females as well. “Whenever I give a talk that mentions past findings of implicit gender bias in hiring, inevitably a scientist will say that can’t happen in our labs because we are trained to be objective. I had hoped that they were right.” They weren’t.

Despite the findings, women have made remarkable progress in the math, science, and have made an impact in politics. There are will be those women who will not let that stand in the way. Notable female scientist Cori Bargmann for example, is discovering the causes of Alzheimer’s.

Elizabeth Holmes found a way to test for discovered by using a prick of blood can find the information diseases instead of taking an entire tube. In politics, females are making waves. A Pew Research reported that 100 women are serving in Congress.

The midterm elections in 2014 became a milestone for women serving in Congress. “The number of women serving in Congress has increased significantly since the early 1990s, when there were two female senators and 25 female representatives in the 101st Congress (1989-1991). As of 2015, a total of 36 women (21 Democrats and 15 Republicans) have served as governors in 27 states. In addition, one woman has served as governor in Puerto Rico. ”

Yes, women are making progress, but there is so much we can do to make this year, better. End the bias.