Ethiopia is suffering, and the news media isn't talking about it. 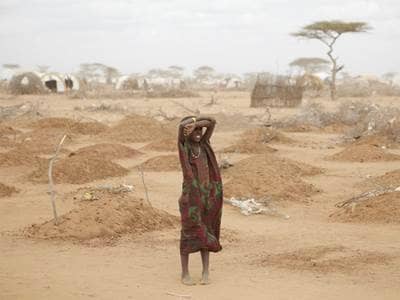 The Lion of Africa is suffering, and the news media isn't talking about it. In the 1980s, when famine-ravaged Ethiopia needed help, the world responded. That's not happening this time, and conditions are now worse in-country than were seen at the height of those troubled times.

Unfortunately, it's expected to get worse. Promised rains failed to materialize, and the crops are dying and livestock is suffering. Worst of all, hundreds of thousands of children and their families are at high risk of malnourishment. Even though the nation took steps to prepare for the worst once the famine of 1983-85 ended, large swaths of the country are in dire need of help from the international community.

Statistics On The Ethiopian Drought

Unless rain comes, the predictions are dire for this country. So far, 75% of all harvests have been lost since the lack of rain began. One million livestock have already died. With no way to sustain these animals, small farmers have had no choice but to cull their herds. Those early decisions are adding up and increasing the risk of food insecurity.

And, that food insecurity is a very real threat. Currently, 430,000 children are at high risk of experiencing malnutrition in the very near future. Of course, so are their families. Before the drought ends, it is expected that somewhere between 10 and 15 million Ethiopians will require at least some sort of food assistance. That's hard to accept for these proud people.

Causes Of The Ethiopian Drought

This current year is one of the driest in East Africa since 1950/51. For two consecutive growing seasons, the rains did not materialize. Because of the effects of climate change, droughts and extended periods of dryness are affecting this region of the world. As temperatures continue to rise globally, the countries of East Africa have become increasingly vulnerable.

However, it is not just the changes in the weather that are causing water shortages. Politics plays a large part in the problem, as well. Since most of the rural areas of Ethiopia rely on wells and cisterns for their daily water needs, when water levels drop, the concentration of contaminants often become too high for it to be safe to drink. The disease often runs from village to village as a direct result of lower levels of water.

The politics of water has impacted the problem in a major way. Before the water from the Nile was subdivided and sent to so many different nations, Ethiopia had an abundant supply of water to nourish its people and its crops. Today, it only receives a trickle of the river: Not enough to sustain itself when the rains fail to deliver on their promise. When El Nino arises and gives a blast of hot air to this struggling nation, the resources are not there to deal with a problem of this magnitude.

What Is Being Done To Help Ethiopia?

After the famine in the 1980s, steps were taken by the Ethiopian government to protect its people should condition once again worsen. That's one of the reasons the press hasn't been reporting on the problem. No one expected the problem to become so large. However, it has, and the nation requires help.

In some cases, entire families have been forced to flee their homes and move to refugee camps set up for the purpose. Once there, they are given access to basic life necessities such as food, water, shelter and hygiene. However, in many far-flung reaches of the country, there is no help readily available.

In many of these communities, children are dropping out of school to trek long miles to fetch water. Gone for long hours each day, these kids head out in the morning for the nearest well still bearing water and return home late at night carrying their heavy burden. The sad truth is that another generation of children from Ethiopia are losing their best chance at escape from poverty since they can no longer receive an education.

Efforts to distribute food and water supplies to these regions that are often plagued by conflict are underway. For many small farmers, the fear is returning as they remembered the high death toll from the famine thirty years ago. No one wants a replay of that time when entire villages died due to the spread of diseases brought on by unsanitary conditions.

Currently, the government of Ethiopia is asking for $1.4 billion dollars in aid to help its people. While the plans made in the aftermath of the famine in the 80s have curtailed some of the worst effects of the drought, those plans simply are not enough to deal with the magnitude of the problem. As food, water and supplies are brought into the country, the nation struggles to distribute it to prevent the loss of life and maintain public health.

What Can You Do To Help Ethiopia?

Ethiopia can take care of its people during this drought, but it cannot do it on its own. It has asked countries like the United States for help, and those nations are doing everything that they can. However, even this is not enough.

Fortunately, in the thirty years between the famine and this current drought, Ethiopia experienced a period of robust growth. During that time, the nation invested in its infrastructure. It now has an excellent road system and made improvements in the agricultural sector. That wise investment means that donations can now be rapidly sent to areas that are afflicted the worst.

However, the country remains fragile. Since the nation has proved to be a leader in its region in the recent past, hopes are high that help will come to keep this proud nation on its upward spiral. And, you can help.

Consider making a donation here to help Ethiopia in its time of need. Your donations will be used to provide food, water, and sanitation to prevent deaths from infectious disease. The Lion needs your help, and it needs it now.