Ladies, you need to vote and let your voices be heard. Why? You’re a powerful voice in a demographic that is often overlooked. 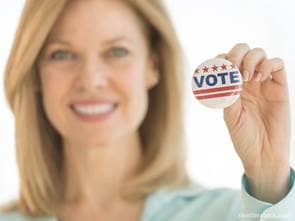 Ladies, you need to vote and let your voices be heard. Why? You’re a powerful voice in a demographic that is often overlooked. There is a lot focus on families and equality, but there has not been much roar regarding the single female voter, and there should be in 2016.There is still work to be done. There are more unmarried women than ever before, and it has increased since the 1960s--so this is a viable source.

Unmarried Equality found that “There are more than 51 million households headed by unmarried Americans, representing roughly 44 percent of all households and the majority of households in 23 states, plus the District of Columbia.”

Politicians will serve those who have a big voice and this means power. And despite how far women have moved up in more high-profile- jobs, they are still lagging in government roles. Women set a record-high for the U.S. Congress at 20 percent--pretty impressive.

The U.S. ranks 33rd in high-income countries, Pew Research found. Meaning, there is power in your vote, no matter who you’re voting for. In the mid-term elections unmarried women were keys for the Democrats, who tend to vote more left than for the Republicans. President Barrack Obama garnered the single female vote, and the married women learned more towards Mitt Romney in 2012.

The U.S. Census Bureau found that more women voted in 2014 than men. An "estimated 44.9 percent of the unmarried population aged 18 and older is female. For every 100 unmarried women there are 88 unmarried men.”

The single demographic is hard to nail down.

“Many single women, across classes and races, would like to marry, or at least form loving, reciprocal, long-term partnerships, and many of them do, partnering or cohabiting without actually marrying,” she wrote. “Still, the rise of the single woman is an exciting turn of historical events because it entails a complete rethinking of who women are and what family is and who holds dominion within it — and outside it.”

The single woman has influence. We can see from those who defied the odds to get women a voice in Washington. Unmarried and married women fought for equal rights before. There is power in numbers.

After the Civil War, single women were left to fend for themselves after their husbands dies on the battlefield.

They joined movements to abolish slavery and to end women’s suffrage that started in 1913.These movements helped change laws, and free people to share in the American dream. Women Margaret Fuller was a women’s rights advocate and part of the Transcendentalist movement. Elizabeth Stanton wrote the Declaration of Sentiments’ in the 19th Century about the issue of women’s rights and they were equal to men (unspeakable in the day).

Yes, progress has been made, but we face new issues like paid maternity leave, and equal pay for doing the same job.

Susan Brownell Anthony was a social reformer and helped start the National Woman Suffrage Association. We need to do our part, even if we feel it is moot.

“There never will be complete equality until women themselves help to make laws and elect lawmakers.”

See in you November.