"Faith, Friendship and the Day I Nearly Lost Everything." 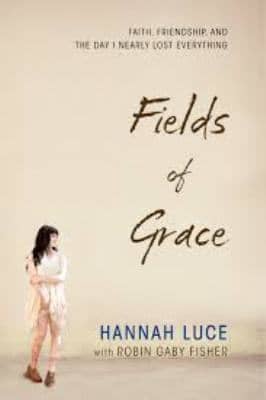 My first stop was in Neodesha, a small town about ten miles south of the crash site. I’d made arrangements to meet with Fire Chief Duane Banzet at the firehouse there. Duane was one of the first responders at the crash, and he’d taken good care of me in the ambulance. He’d even taken the time to drive to Kansas City to see me in the hospital. He was kind and easy to talk to, and I had a million questions for him about things I either couldn’t remember or wanted to clarify from that day.

I got there around lunchtime. Duane greeted me with a smile and a bear hug. “You’re a sight for sore eyes, Hannah,” he said, inviting me into his office. We talked a long time, hours, in fact, until late in the afternoon. How did he first hear about the crash? I asked. How long had it taken him to get there from the firehouse? What was the first thing he saw when he got there? Did he remember how I looked? What did remember about Austin? Did he know Austin was going to die? Did he think I’d make it? Did he recall how long it took for the medical transport helicopter to come? Had he talked with the two women who found us? Duane answered every question with patience and compassion. He even drew a diagram of the plane on the ground and where each of the bodies of my friends had been found. He was matter of fact yet empathetic, and I could tell that he’d been deeply moved by what he witnessed that day.

As we were talking, I looked around his paneled office. It was cozy and inviting and quiet except for the occasional staticky call that came over the scanner. Happy family pictures were scattered on the desk and credenza. I assumed the pictures were of his wife and his children. One was of a girl who looked to be about my age. “My daughter,” he said, reading my thoughts. I got the impression from the photographs that Duane had a satisfying life, but I couldn’t help noticing that his eyes looked sad. I imagined he’d seen some pretty awful things in his years of service, and he said that he had, more than his share.

Duane said he’d made it his practice never to get personally involved with the people he met on the job, but something was different with me. It had to do with something he saw in my eyes and Austin’s eyes on the day of the crash, he said. Even though he knew we were afraid and in pain, our eyes told a story of a certain kind of serenity. Duane called it “the peace of God.” I’d seen that same look in Austin’s eyes, but I hadn’t been able to identify it. My poor friend’s body had been ravaged by fire, he was in terrible pain, and I’m sure he knew he was about to die, but the look in his eyes was one of serenity and conviction. Had I witnessed the peace of God in him?

Duane told me a story from when he was fifteen years old. He was working for his grandfather and his uncle on their farm that summer, he said. They’d just finished lunch, and his uncle told him he had had a truckload of grain that needed to be unloaded for feed for the hogs:

“When my uncle went to check on the cows, I climbed up on the truck bed. I never heard my uncle come back, but the next thing I knew, the truck bed was tilting and I was sliding into the bin with the grain. I was buried alive. My mouth was packed with grain and I couldn’t breathe. I knew I was going to die, but a sense of peace came over me and I wasn’t afraid. Next thing I know, my body’s floating upward, through the stars. I was headed to Heaven.”

But his uncle brought him back. He said he heard his uncle screaming for him. He’d dug him out of the grain pile alive. He said, years later, when he became a firefighter and tragedy became a regular part of his life, he often thought about the grain accident and asked himself why he’d been spared, yet he couldn’t save a child who’d drowned or a baby who’d died from SIDS. Often, he said, he’d asked God, “Why me, and not this little two-year-old or seven-year-old or ten-year-old?” After every loss, he said, he’d be depressed for long periods of time.

“I know you’re asking yourself the same thing, Hannah,” he said. “Why, God, did You save my life? Why did You give me another chance? Why me and not Austin or Luke or Stephen or Garrett? I know you feel unworthy of being the only one who survived. But what happened isn’t your fault.”

“Why do you keep doing this job that causes you so much torment?” I asked.

Duane hesitated for a minute. “It’s what God wants me to do,” he said. “It’s not easy for us to understand why this stuff happens, but bad things happen to good people every day. God’s got a plan for you and you’ll have to ask Him what it is.” As if he knew of my struggle to hear God’s voice, he added: “Don’t expect the heavens to open up and hear Him start talking to you. It doesn’t happen that way. It’s a kind of peace that comes over you when you’re on the right path.”

“Did you ever question God?” I asked.

Hannah Luce is the daughter of Teen Mania Ministries cofounder and preacher Ron Luce. She lives in Chicago, IL. At 23 years old, she's also the founder of Mirror Tree, a non-profit devoted to re-integrating refugees from the horrors of rape, genocide, civil wars and other means of trauma by funding educational research to improve their lives.

Robin Gaby Fisher is the New York Times bestselling author of The Woman Who Wasn't There and After the Fire. She is a two-time finalist for the Pulitzer Prize in Feature Writing and a member of a Pulitzer Prize–winning team. She teaches narrative journalism at Rutgers University.