Supporters were amped up for the Special Olympics World games this summer. “The Special Olympics crew is now leaving the White House. Thank you Mr. President, thank you America,” Tweeted organizers. They can also thank Eunice Kennedy Shriver. 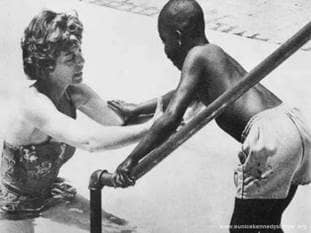 Supporters were amped up for the Special Olympics World games this summer. “The Special Olympics crew is now leaving the White House. Thank you Mr. President, thank you America,” Tweeted the organizers. They can thank Eunice Kennedy Shriver.

Shriver had a heart for children who had physical and intellectual disabilities so she set out to change stigma and give people a chance to shine. An athlete herself, the sister of President John F. Kennedy and Senators Robert F. Kennedy and Ted Kennedy, found that many of these talented people were put in institutions for their disabilities, and disregarded by culture.

Yet, they had so much to offer society. Her sister Rosemary had an intellectual disability, and the family spent time together around sports like swimming or sailing. Over time Rosemary’s behavior worsened, and she had brain surgery, which made it impossible to be cared for at the family’s home.

She was then moved to a Catholic institution in Wisconsin for treatment. This had a profound effect on the family, and for Eunice. She set out to help people reach their potential, and even lived in a prison according to reports to better understand inmates, and how to rehabilitate them.

The first camp had 50 children participate with the help of volunteers free of charge from the Joseph P. Kennedy Jr. Foundation, which also offered grants in support of like camps. The concept grew, and she received the funding to launch the International Special Olympics Games in the summer of 1968, while raising awareness.

The event was scoffed at, and many people didn’t attend, but Eunice took to the microphone as a parade of competitors marched and said the Special Olympic mantra “Let me win, but if I cannot win, let me be brave in the attempt.”

“Special Olympians and their families are challenging the common wisdom that says only intellectual achievement is the measure of human life,” she said.

“They have proved that the common wisdom is wrong. Special Olympians and their families-more than one million of them-are proof that the value of human life should be measured in many ways.”

Eunice Kennedy Shriver’s legacy lives on despite her absence, where over 7,000 athletes from over 160 countries will join the Special Olympic Special Games in Los Angeles this year.

“I feel a sense of gratitude, a sense of admiration. I am very energized by them.”