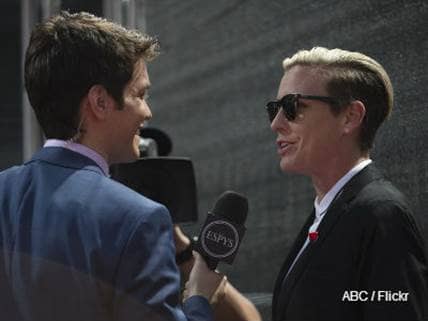 Soccer legend Abby Wambach has made the difficult decision to retire. Her final game will be on December 16th against China in New Orleans when the United States plays its last match of its 10-game Victory Tour. Wamach played for the national team for 14 years. She has won two Olympic gold medals (2004 and 2012), and the 2015 Women’s World Cup.

In a statement announcing her retirement Wambach said, “After much deliberation and talking with my friends, family, teammates and our coaching staff, I’ve decided to finally bring my soccer career to an end. While we still have more work to do for women’s soccer, after bringing the World Cup back to the United States this summer, I’m feeling extremely optimistic about the future of our sport. It’s been an amazing, wonderful ride and I can’t wait to see what the next chapter of my life brings.”

Wambach is the youngest of seven – with two sisters and four brothers. At four-years-old Wambach began playing soccer after her sister decided she wanted to try the sport. Her mother checked out a book from the library on how to play soccer and then the Wombachs took the sport on as a family tradition. And from there it’s all history. Wambach went onto play in High School and was named a member Parade Magazine’s High School All-America Team. She was even cited by USA Today as one of the nation’s top 10 recruits. Wambach went on to the University of Florida Gators and had an impressive soccer career. She still holds the Florida Gators’ all-time leading scorer record with 96 goals and in 2010 Wambach was inducted into the University of Florida Athletic Hall of Fame.

Wambach has scored 184 goals in 252 international matches. She is currently the leading all-time international scorer for men and women. She has stood as an inspiring role model for both men and women on and off the field. Not only has she served as a philanthropist for organizations like the Epilepsy Foundation and Juvenile Diabetes Research Foundation but she has also supported her fellow teammate Mia Hamm at the various Children’s Hospitals fundraisers in support of the Mia Hamm Foundation. In 2013, she became an ambassador for Athlete Ally which is a nonprofit organization that focused on ending homophobia and transphobia in sports. Wambach has made it her mission to help others who struggle within the LGBT community.

In October 2013, Wambach married her longtime partner Sarah Huffman at a ceremony in Hawaii. The media went on frenzy and published headlines that questioned Wambach’s sexuality. However, Wambach handled the attention with a great deal of poise and strength. She released a statement saying, “I can’t speak for other people but for me, I feel like gone are the days you need to come out of a closet. I never felt like I was in a closet. I never did. I always felt comfortable with who I am and the decisions I made.” Wambach’s actions reflected those of a strong role model. She was able to stand her ground and show others, that look up to her, that you should never be ashamed of who you are. Own every aspect of your existence and never allow someone to diminish your being just because they deem it not set to their standards of living.