Taylor Anderson was fascinated with Japan since she was a young child. Determined to one day live there, Taylor realized her dream in 2008. She studied the language and culture, and was teaching English in one of the country's coastal cities when a devastating tsunami struck the country in March 2011. 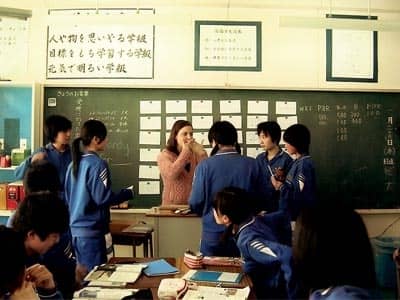 Taylor Anderson was fascinated with Japan since she was a young child. Determined to one day live there, Taylor realized her dream in 2008. She studied the language and culture, and was teaching English in one of the country's coastal cities when a devastating tsunami struck the country in March 2011. In a tragic twist of fate, Taylor was the first American victim of the disaster.

Beliefnet recently sat down with Taylor’s sister, Julia, to discuss Taylor’s love of children, teaching and her lasting legacy for the children of Japan.

Tell us about Taylor’s inspiring work as a teacher in Japan.

Taylor always had a dream of living in Japan. I think one of the most inspiring things about her move to Japan is that she left everything she knew at home and moved to embrace a new culture. One thing we learned when we went to visit her schools in September was how whole heartily she put her effort in everything. Her principals, fellow teachers, and students continually told us how she was a great teacher and always had a smile on her face. She made it her job to inspire her students to want to study English. She went above and beyond what other teaching assistants did. She made students personalized posters for their English speaking contests, and always had a creative idea to keep her students involved.

What is the mission of The Taylor Lane Anderson ’04 Foundation? How does the foundation benefit the children of Japan?

The mission of her Foundation is to have her memory live on in Japan through relief efforts, and since her foundation is based out of our high school, we focus the money on the schools she taught at. Currently we are putting bookcases in all of her schools. They contain her favorite English books, a computer, and a DVD about her. Her foundation is also supporting orphanages in northern Japan. We buy them educational items and send the kids to summer camp!

What are some of the devastating effects of the Tsunami and its resulting impact on children and the education system in Japan? How is Taylor’s foundation helping in these areas?

The area where she lived and worked has been completely wiped out. There is a section along the main road and there is debris going miles inland. They have cleaned a lot of it up, but it will take a while for it to be a functional space again. Two of her schools are gone. They now exist in temporary buildings on the playgrounds of her other schools. It was amazing to see how they fixed that problem. Our fund can’t support rebuilding the schools, so we are focused on rebuilding the students’ spirits. Programs that we are supporting, Smile Kids Japan for one, have therapists available to talk to the children who were affected by the tsunami. We also send them anything to lift their spirits, like toys, games, and even a Wii!

What is your fondest memory of Taylor as it relates to her passion for teaching/helping the children of Japan?

Every time you skyped with her, she would show you what she had planned for the next day. It was always fun to see how she would get her students excited about American culture.

What do you think will be Taylor’s biggest legacy?

Her biggest legacy is that she is a bridge between Japan and the U.S. That is how her colleagues view her in Japan. She has given so many people the opportunity to explore a new world that may never have been available before. For example, some of her students have just visited the U.S. through a government exchange program. That is just one example of cultural exchange inspired by Taylor. Through her fund, we plan on continuing on being the bridge that Taylor once was.