A Daughter's Struggle, a Mother's Fight

Marilyn Martone shares her heart wrenching story about her daughter, who was struck by a car and now suffers from a traumatic brain injury. 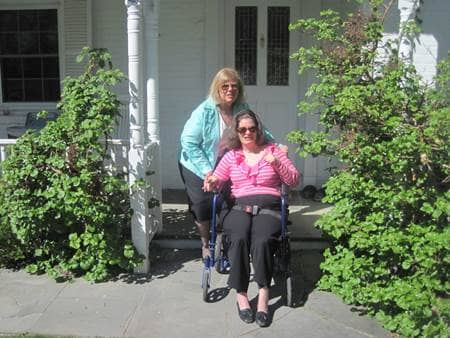 “The fuller our lives are, the more apt we are to experience loss.”

On February 22, 1998, Marilyn Martone received the news that every parent fears. Her daughter Michelle was hit by a car while waiting outside her dorm for the campus van to take her to dinner. Marilyn’s husband answered the phone, and they dropped everything to be at their daughter’s side. Michelle was a senior in college and was a talented woman who had the rest of her life ahead of her until an accident changed everything.

When Michelle arrived at the hospital, based on the Glasgow Coma Scale, she was a three; which is the lowest rating someone can be without being declared brain dead. The doctors predicted that Michelle only had a 15% chance of waking up. She was moved to various hospitals and centers over the next several months.

There were constant battles and stress that the insurance company brought on. Michelle had health insurance but that didn’t mean that everything was taken care of. “The insurance company basically says that you have to make your progress in six months,” Marilyn said. So Marilyn and her husband were forced to pay for many costs themselves and in time were successful in formulating a law suit settlement to cover the rest of MIchelle’s treatment and care costs.

After several set-backs and surgeries, MIchelle woke up and was conscious.

Eventually, Marilyn arranged for MIchelle to come home so that the family could take care of her. Marilyn also hoped that if Michelle were home that she may be more inclined to progress. Cognitively MIchelle is okay. Her personality and humor have stayed intact, but her memory has taken a toll. “Imagine waking up in the morning and not knowing what day it is,” Marilyn said. It is so important that MIchelle gets to live and progress at home because she is comfortable with her home. Marilyn said that if she were in a facility and woke up, then she would have no clue who everyone was around her. Comfort and stability are essential to MIchelle’s continued recovery.

Marilyn said, “The literature backs the insurance companies and says that progress needs to be made within six months for results to be successful.  Yet after 14 years Michelle is still continuing to make progress.”

Michelle has 24/7 care and therapists that work with her every day. The therapists help Michelle use her walker to get around and work with her to develop fundamentals. She enjoys playing Bejeweled and Wheel of Fortune on the computer. Marilyn said, “Every Saturday Michelle goes horseback riding. She can go out on her three wheel bike with her therapist and answers her email.”

Michelle’s friends still keep in touch and visit her when they’re in town. “The biggest thing is that she wants to get married and have children,” Marilyn said. “Michelle’s still hopeful about it and we don’t kill the hope.”

During the first years of Michelle’s recovery, Marilyn was succumbed with guilt if she took time for herself or with her husband. “How does one sit in the theater and enjoy oneself when one’s daughter is lying vegetative several miles away?” she said. “This guilt complex stayed with me for a long time. I felt that it was wrong for me to enjoy anything while my daughter was incapable of experiencing joy.”
Over the course of Michelle’s years with traumatic brain disorder, Marilyn had to undergo surgery for knee replacements and breast cancer. She was angry. “Larry and I were about to enter our golden years. I didn’t mind missing out on that. All I wanted to do was to take care of my daughter. It was impossible for me to get sick or die.” she said.

In her book Over The Waterfall Marilyn talks about the accident, the struggles and everything that came along with the turmoil. “The only way I could pay back was to become a voice for people with brain injuries,” Marilyn said. Family members who have loved ones suffering from traumatic brain injuries are so busy taking care of their loved one, that they don’t have the time or means to have their voice heard. “When you have a disability or you are taking care of someone that has a disability, you get pushed to the side,” she said. More than anything, she wants her daughter and others like her to be a part of society.

Despite the constant struggles, Marilyn chooses to fight for life.

Marilyn said, “I know there’s a reason for this but I don’t what it is. But isn’t that what faith is? You go on believing even though you don’t know. But believing that God does.” She believes that there is a reason for everything. “I believe that God knows what’s best for us,” Marilyn said.

Read the heart-wrenching story about her daughter, who was truck by a car and now suffers from a traumatic brain injury. Over The Waterfall By Marilyn Martone Ph.D