A Closer Look at The Hand on the Mirror

The personal journey shared in The Hand on the Mirror is not what you would expect from someone with a traditional upbringing and experience in the hard-edged world of newspapers. The journey is a story of Durham's spiritual growth and how her mind gradually opened to realities that she previously considered unimaginable. 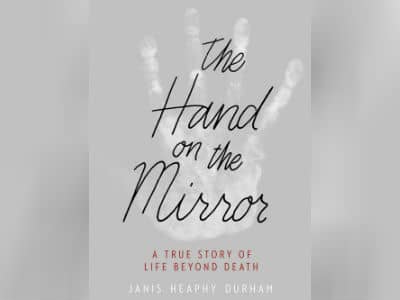 In 2004, Janis Heaphy Durham’s husband, Max Besler, died of esophageal cancer at age fifty-six. While coping with her grief, Heaphy Durham began encountering phenomena unlike anything she had ever experienced: lights flickering, doors opening and closing, clocks stopping at 12:44 - the exact time Max died. But then something startling happened that changed Heaphy Durham’s life forever: a powdery handprint spontaneously appeared on her bathroom mirror on the first anniversary of Max’s death. Incredibly, a similar image appeared on the second and third anniversaries as well. Clearly, something otherworldly was occurring.

This launched Heaphy Durham on a journey that transformed her spiritually and altered her view of reality forever. She interviewed scientists and spiritual practitioners along the way, discovering the fragility of the veil between this world and the next and the way the two are bridged by love.

The personal journey shared in her book, The Hand on the Mirror, is not what you would expect from someone with a traditional upbringing and experience in the hard-edged world of newspapers. The journey is a story of Durham's spiritual growth and how her mind gradually opened to realities that she previously considered unimaginable. Moreoever, it's a story about love and how love ties us all together in a far more fascinating universe than I ever imagined. Durham hopes that her story will be a source of strength to all who are touched by death, which, of course, is everyone.

The question of what happens after we die has always challenged us. The topic makes us uneasy. Here we are, living active and full lives. Why do we even want to think about death? Then it strikes. We lose someone we love and we are faced with contemplating death and the afterlife. Scientists, theologians, writers, musicians, poets, and artists have all addressed the question directly or indirectly. It is at the core of organized religion’s belief system, one that I grew up with as a Presbyterian. We believe that when you die you go to heaven. But what exactly is heaven?

If we knew, not just from the faith of our religions, but from modern science, that our consciousness survives after death, it would profoundly affect how we behave. I think it’s arguable that this question of whether or not there is an afterlife is the most important question in life. What could be more important? The Hand on the Mirror suggests that we continue on in another form after we die. Simply put, life does not end with our physical death. My hope is to open readers’ thinking to this possibility.

The Hand on the Mirror documents a journey however it is meant to encourage people to talk openly about their experiences of communicating with a loved one after the loved one has passed.

Durham hopes that her book will provide readers an intellectual foundation of legitimacy for those conversations about death. These discussions should be out in the open, free of constraint. As a society we could benefit from eliminating the stigma associated with sharing personal stories about the afterlife, including those that involve the supernatural, as mine do.

Durham feared embarrassment and served as a source of fear. But, she knew that the story was incredible, out of bounds of the normal. And even though there are documenting photographs, people often believe only what they choose to believe, not what may be unbelievable but true. Durham's bravery, documented in The Hand on the Mirror, serves as a testament and a source of inspiration for those who also connect with their loved ones who've passed on.

To learn more about The Hand on the Mirror click here.