A powerful and haunting meditation on human nature told from the dual perspectives of a Vermont family that has adopted a chimp as a surrogate son, and a group of chimpanzees in a Florida research institute. 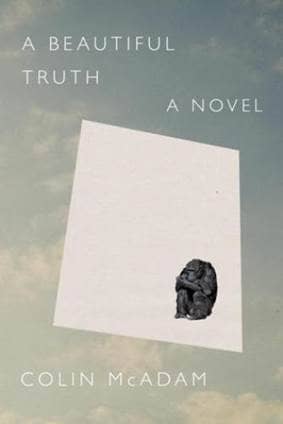 Excerpt reprinted from A Beautiful Truth with permission of SOHO Press Inc.

A padlock on the fridge was an obvious measure.  The old high doorknobs on most of the doors in the house were a boon to Walt and Judy because he wasn’t tall enough for a while.  But he had quietly observed them in all their daily tasks and soon knew how to deal with every handle, knob, lever, door, switch, clasp, plug, button, tie or unlocked lock in the house.  And because he was so good at climbing there was little they could put beyond his reach.

Walt remembered the cage which Henry Morris used for Buddy.  He proposed it, and Judy said absolutely not.

Judy made checklists all around the house and tried to keep loose objects secured unless they were willing to sacrifice them as missiles or toys.  Walt put padlocks on most of the cupboards.  He tried to make the electrical outlets safer and always kept an eye over his shoulder when he was manning the grill; but he also figured a burn here and there was the surest way to learn.

Looee had an insatiable appetite for playing.  And because of the weather in Vermont it often meant that diversions were required indoors.  He loved hide-and-seek, but sometimes played it when others didn’t know he was playing.  He climbed onto the mantel one afternoon and watched as Judy walked around the house calling his name.  Looee it’s time to clean up the dining room, come on my little man, my Looee where are you.  When she came around the corner he leapt from the mantel onto her shoulders and she lost control of her bladder.  He then walked to the bathroom, took toilet paper and ran around the house, unraveling it and laughing.

Judy’s concern was not her own emotional state so much as how he reacted to it.  When he saw her fear or anger he got frightened himself and he would run around screaming, trying to find comfort where he could until he felt he could touch her or get a hug.  It magnified the impact of simple frights and required massive mental energy from Judy to feel calm almost before her fear.

They usually found such delight in seeing how much he could do, though, and, when they were in the right mood, they loved to watch him play.  He learned by observation, by staring and remembering.  He learned to crack eggs.  You sit up on the counter there.  He held the electric beater.  He could spread butter on his toast with a knife.  It was rarely done with grace or without a mess, but they imagined he would one day be more careful.

He loved to wear Walt’s ski-doo helmet, which was half the size of his body.  He wore it backwards and walked into furniture.  He laughed every time he hit something, and it was impossible not to laugh when he laughed.  Larry saw him do this, and Walt said do other animals laugh.

Sometimes he could sit still.  He liked magazines, especially ones that focused on home decoration and women.  He loved pictures of women sitting in family rooms and he would make his I like this noise, that creamy repetition of ooo through his soft lip-trumpet, and he would look at Judy and tap the page with the back of his fingers.  There were lovely minutes where she could settle him down with a magazine and read one of her own or do some work in the kitchen with the sound of I like this in the house.

When he misbehaved they tried to be patient with him, but they had their own ways of making him obey when patience was exhausted.  With Judy, the most effective was to make him feel guilty.  You’re going to make mummy sad if you do that.  Do you want mummy to cry.

His natural way of apologizing was to come to you with his hand held out, shrugging and bowing as if to acknowledge that, while he had had no choice, what he had done was wrong.

Walt found that shouts and threats were the best way to bring him in line.  He was never physical - he never had to be.  Looee instinctively understood that shouts were a prelude to something worse.  Shout at him, and be done with it.  They always got on well immediately after an outburst.

At some level these negotiations and struggles for power meant that Walt had no choice but to see him as an equal - a child perhaps, but certainly not an animal.  There was never any sense of ownership or mastery.

Walt shouted and took Looee in his arms and they went out for a drive, and Walt slapped his hands away whenever he reached for the wheel.

When it came to the artificial niceties of human life he had his own approach.  He ate with cutlery.  They never taught him or said that he should, he just saw them doing it and didn’t want to do anything they didn’t do.  If they presented him with a bowl of food, he never dug in without a fork or spoon.  He only drank from a cup or glass.

He wore diapers for the first couple of years and they tried to train him to use the toilet.  Looee had always been fascinated by it; he would let neither of them go into the bathroom alone and would flush for hours if he had his druthers – but getting him to use it himself had been a struggle.  Walt had placed a step up to the toilet to encourage Looee to pee standing up, but he wouldn’t.  Walt demonstrated how it was done but Looee either tapped on Walt’s penis or drank from Walt’s stream, and the two would emerge from the bathroom confused for different reasons about the significance of urine.  Looee now went into the bathroom on his own sometimes and otherwise used a portable potty.  There were accidents, of course, as with any other child, and sometimes he was deliberately dirty.

They learned that the ability to lie comes naturally to everyone.  They never taught him to toy with the truth but they saw him do it early and it was often potty-related.

Judy had annoyed him by refusing to tickle or play with him, having done so for two hours.  He went into the living room and shat on her sheepskin rug.

She was very upset when she discovered it and said why did you do that.  He shook his head as though it hadn’t been him and he gestured towards the garage where Walt was tinkering.

It was daddy who did that, was it.

Walt put up a swing set in the front yard.  Looee helped him fetch pieces to put it together, and as soon as it was upright he couldn’t get enough of it.  He ripped the seats off and swung from the chains.  Walt built a wonderland for Looee out front.  Tires from tractors and cars which he flipped, hid in, gnawed on and rolled.  Looee spent hours out there, not yet eager to explore beyond the property.  He and Walt would come in sweaty and hoot when Judy said we’re eating Italian Rice Balls tonight.

Judy bathed Looee and relaxed him with body lotion. She put him to bed while Walt envisioned his next day’s work downstairs. Conversations foreseen and successes planned, if this goes that way and that goes that way.

On the weekend Walt and Looee worked in the garage.

Walt said get me the ballpeen hammer.

The one with the black handle.

Colin McAdam's novel Some Great Thing won the Amazon/Books in Canada First Novel Award and was nominated for the Governor General's Literary Award, the Rogers Writers' Trust Award, the Commonwealth Writer's Prize, and for the John Llewellyn Rhys Prize in the U.K. His second novel, Fall was shortlisted for the Scotiabank Giller Prize and awarded the Paragraphe Hugh MacLennon Prize. He was written for Harpers' and lives in Toronto. For more information on Save the Chimps click here.