Do you see angels? Beliefnet readers share their angel pictures and the memories behind them. This photo gallery highlights amazing angel photos and stories. 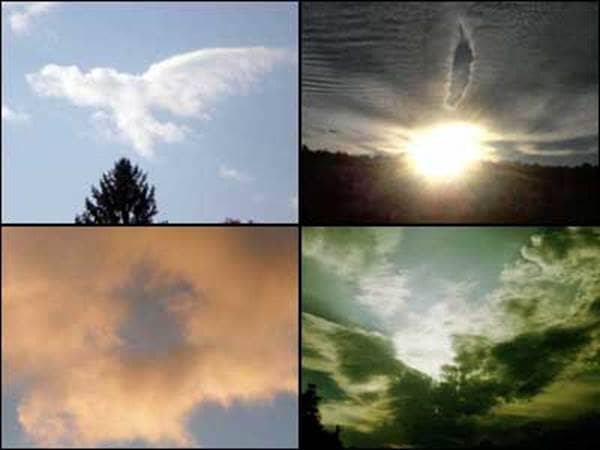 Your Photos of Angels

Angels are still everywhere, and we have the pictures to prove it.  Beliefnet has featured several versions of this photo gallery, each with a diverse collection of angel pictures snapped and submitted by our readers.  The most common angel sighting is in the shape of clouds, but sometimes surprising ones also appear, like a piercing light in Italy or an atmospheric yellow aura at a wake.

See the unforgettable angel photos and read the stories about them. 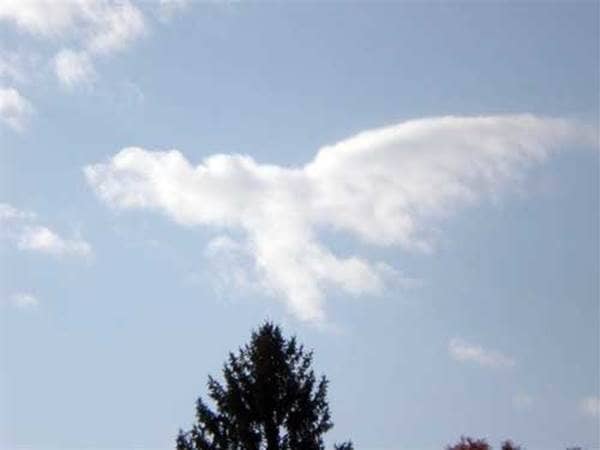 <b>Above the Tree Top</b><br><Br> In 2007 I got breast cancer and I was extremely upset. In December, I woke one morning and saw two girls, my guardian angels, standing next to my bed. I had such a peaceful feeling. Afterwards, I always wished to see th 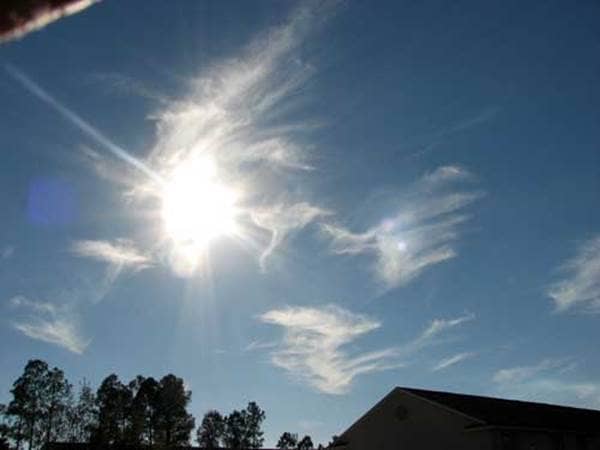 <b>Curves Angels</b><Br><br>I am the owner of a Curves in Ruston. While I was sitting at work one day, I looked out the window and up into the clear blue sky. I asked a Curves member what she saw, and she said angels. I was in awe. I had never seen su 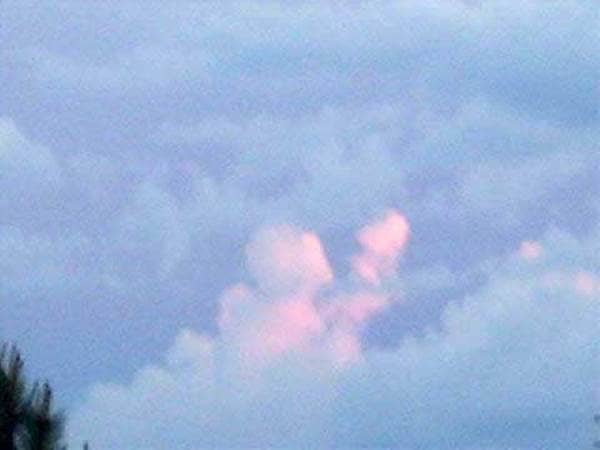 <b>Wings of a Dove</b><br><br>I was outside, after a late 2008 summer thunderstorm, when I captured this during sunset time. To me, an angel is looking heavenward [while] releasing a dove from its hand into the heavens....<br><br><b>Mary Ann Paap<br>Ben 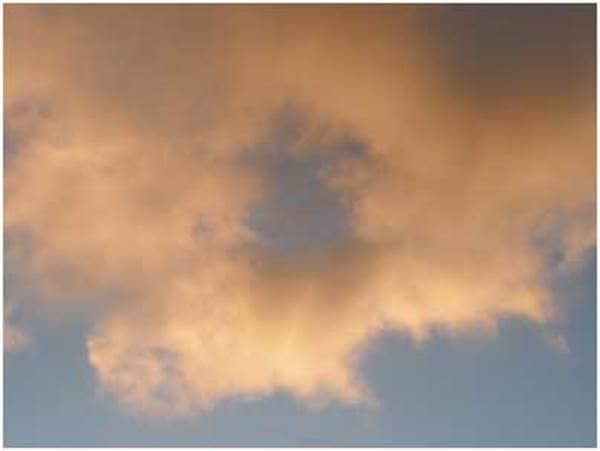 <b>My Little Angel</b><br><br>My husband and I have a home in Vero Beach, Florida. When we visit, we make a point of getting up every morning to see the sun rise. We are always in awe of the beauty we see. This photo was taken one of those mornings. I bel 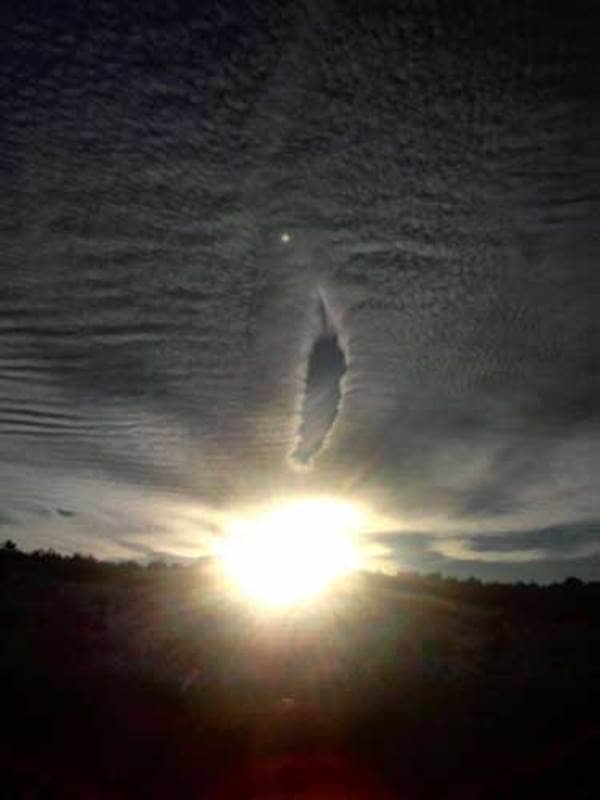 <b>Wings or a Feather?</b><Br><Br>This picture was taken during a trip to Gallup, NM on December 19, 2008. My two daughters were asleep in the back seat as I was driving and contemplating our future. I had recently finished reading “The Miracles of Archan 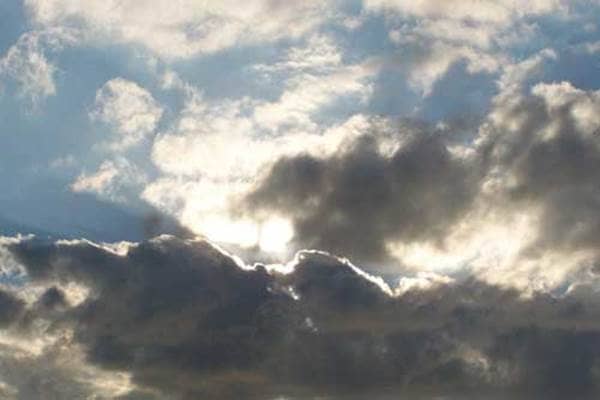 <b>Seraph in the Sun</b><br><br>During November 2008, Darla Wilber of Greenfield, IN took this picture in Florida while I was driving. I saw the angel and I had to stop. I have always loved angels.<br><br><b>Barbara Franceschina<br>Lebanon, IN</b> 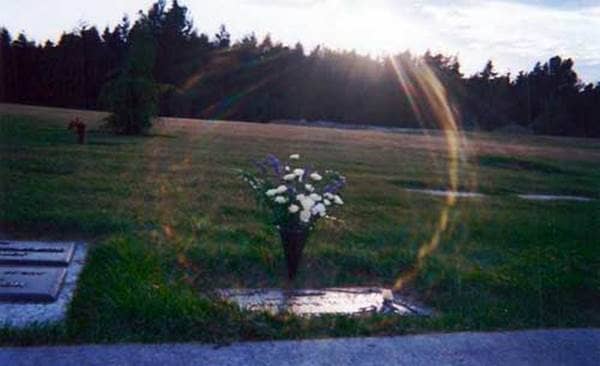 <b>Soldier of Light</b><Br><Br>This photo was taken at the site of my son’s, Scott's, grave years ago. We lost him on July 21, 1998 in an automobile accident. I frequently visited my son's grave in those early days following his death, and it was on such 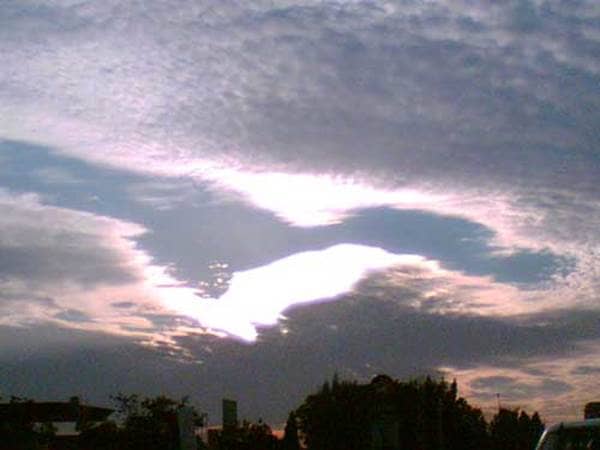 <b>Traffic Guardian</b><br><br>This was taken one morning as I was driving to work. The angel appeared to be watching over a very busy intersection where there had just been a spurt of accidents. Traffic seemed to flow much better on that day. <br><br><b> 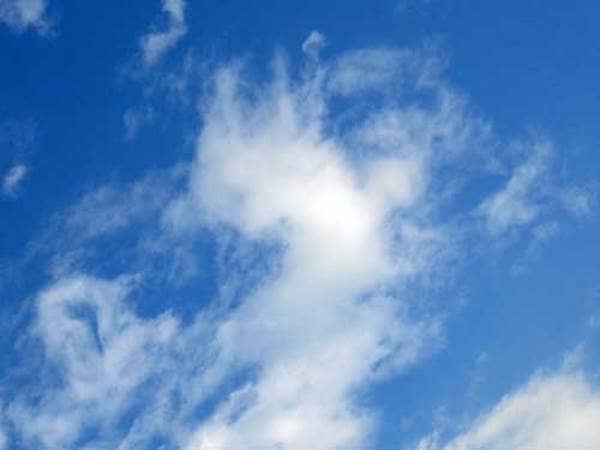 <b>Sideways</b><br><br>My kids’ first day of school was August 25, 2008. After we got home, I went out to the front yard to watch the kids play. The kids asked me to take a picture of a rainbow in the sky. When I looked to the right of the rainbow wher 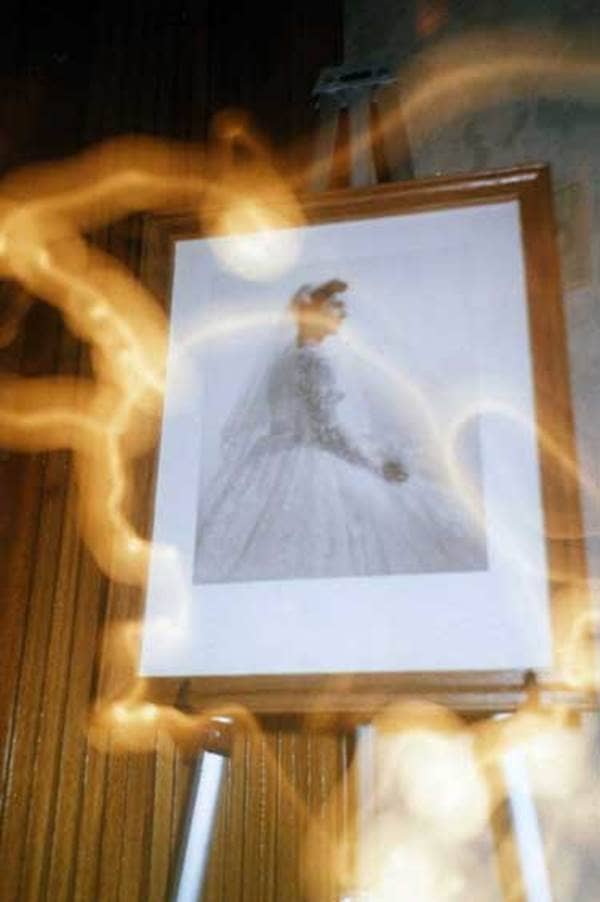 <b>Mother's Visit</b><br><Br>This photo was taken at my mother’s wake. Her wedding photo was next to her casket. The lights and swirls appeared when the photo was developed. I was told that we are all energy and that I was truly lucky to catch my mothe 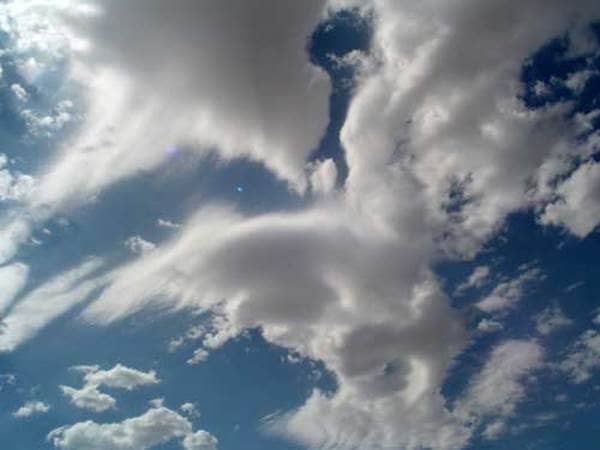 <b>Guiding Home</b><Br><Br>It was a year after my husband’s death and I was giving a presentation at a college on organ and tissue donation. I was feeling very alone and I was missing him. I got lost on my way home, but when I finally arrived, I looked up 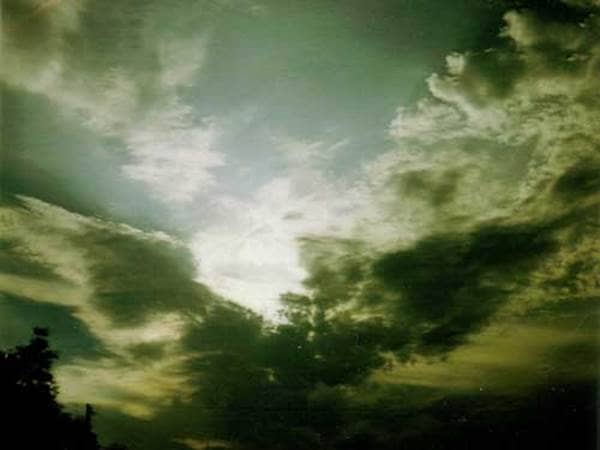 <b>Dark Angel</b><br><br>Our teenage son had become disobedient and disrespectful. One day, while in prayer, I heard the following words: “Go look out your back door. I've sent you an angel to help.” I looked outside and saw this angel. I fell to my k 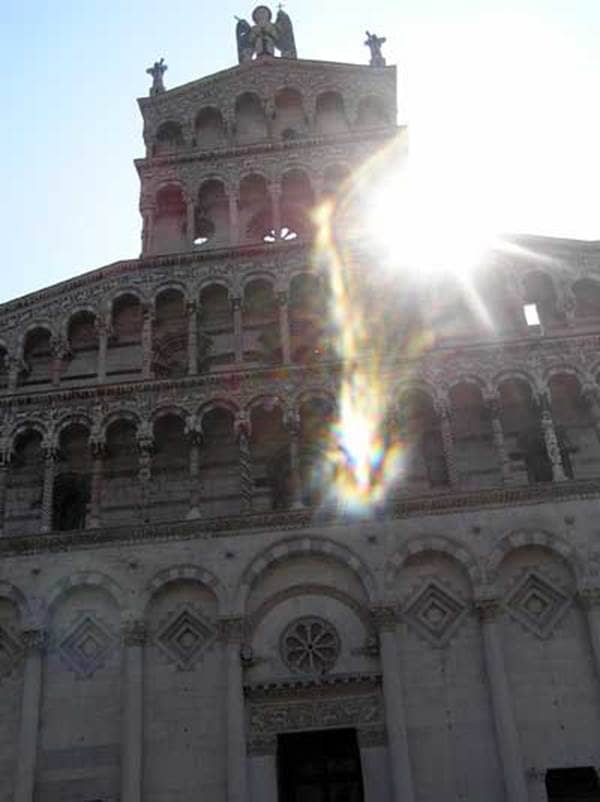 <b>The Light in the Piazza</b><Br><Br>My sister took a picture of San Michele Church in Lucca, Italy in August 2006. When she returned [home] from her European vacation, she uploaded all of her photographs, and this one stood out to her. Right away, she 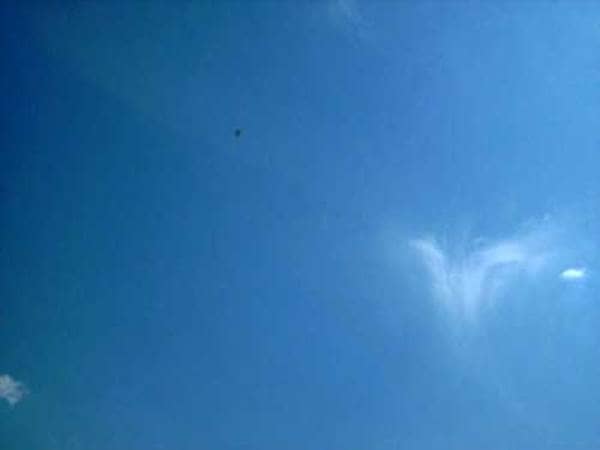 <b>Bridge of Angels</b><br><Br>My husband and I were driving to Atlantic City in March 2008. I saw an angel, but she kept playing hide-and-seek with me. When I first saw her, she had been more defined. I could see her robe, her outstretched arms, and e 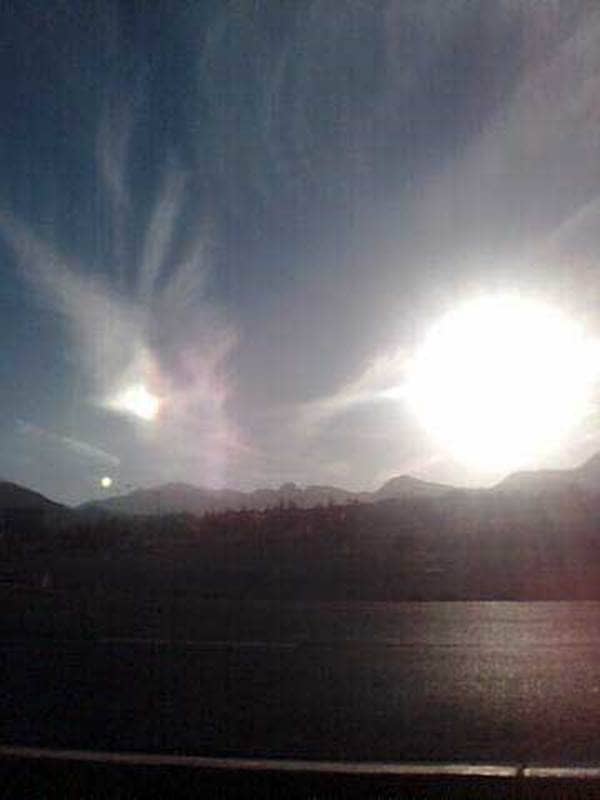 <b>Always There</b><br><Br>I am a student at a local community college. As I walked outside to take a short class break, I looked up and saw this angel (on the left side). I was having a particularly rough time at home and at school, and I was also deal 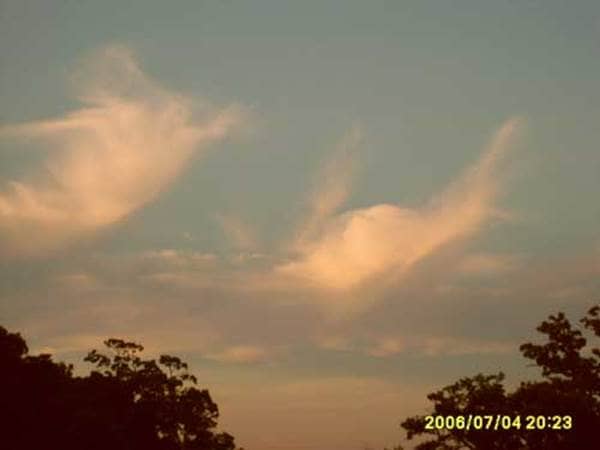 <b>Catch Me If You Can</b><br><br>I took this picture at Lake Shawnee in Topeka, Kansas on July 4, 2006. There are two angels. On the left, it looks like one angel is trying to catch up with the other angel on the right. The other angel looks like a you 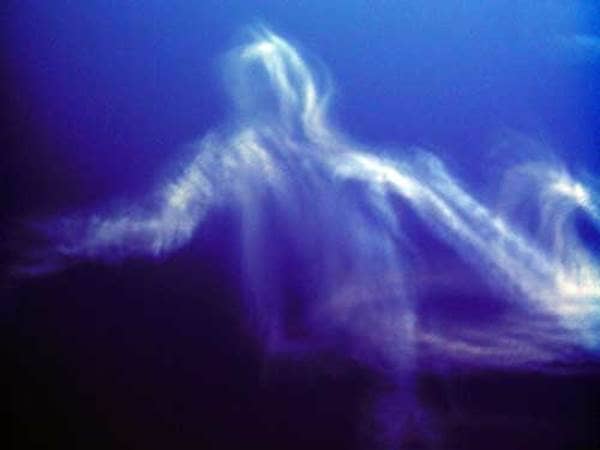 <b>Lift Off!</b><br><Br>Angels surely guided the astronauts on their space shuttle mission in June 2007 because my children and I saw angels in the sky a few hours after the shuttle launched. They had also been seen by people all over central Florida, to 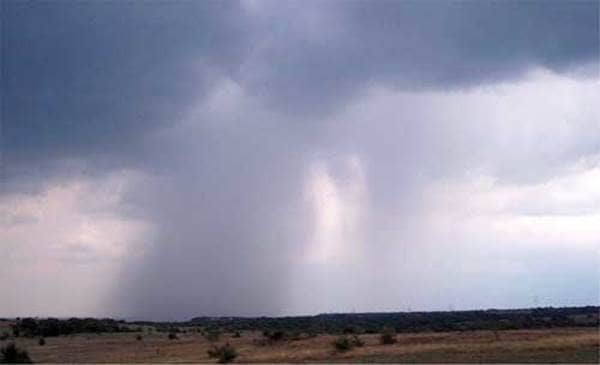 <b>Soaring in the Storm</b><Br><Br>A few months after my mom passed away in 2003, I took this photo. As a storm cloud moved in, this angel appeared. When I saw [the angel], I was certain my mom was letting me know that everything was great where she is 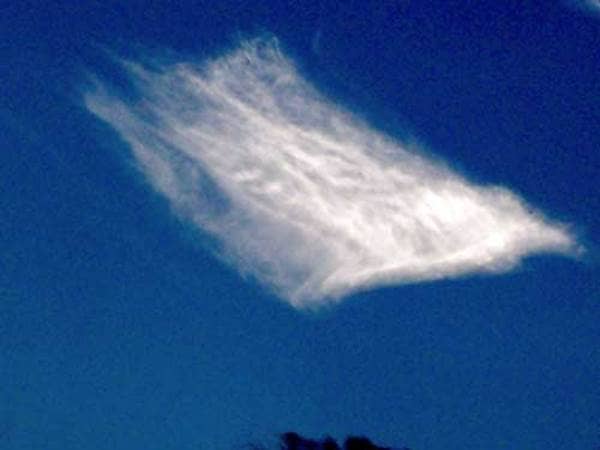 <b>Visitor on the Hillside</b><br><br>Our small congregation has an annual church service on a late Saturday afternoon on a hillside outside of town. During a service on August 9, 2008, this square cloud was observed overhead. I hope you can see the fac 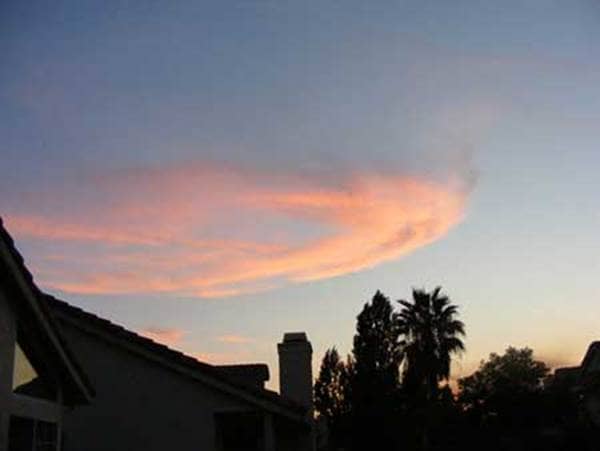 <b>Serenity at Sunset</b><br><br>I took this just before sunset, standing in my backyard. I looked up and this image was floating over my roof. You can see a face, wings, a whole torso, and a flowing robe. I was having a troubled day. To see this before s 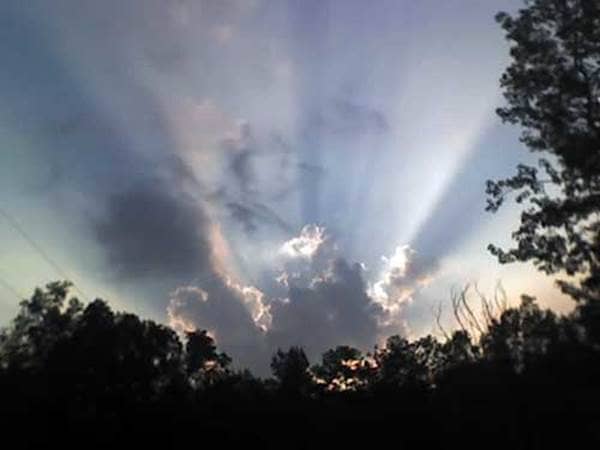 <b>Breaking Light</b><Br>This picture was taken the day after my sister was buried. She had spent 17 days in the hospital after a brain aneurysm ruptured, and she died just days after her 42nd birthday, leaving behind two teenage daughters. My family was 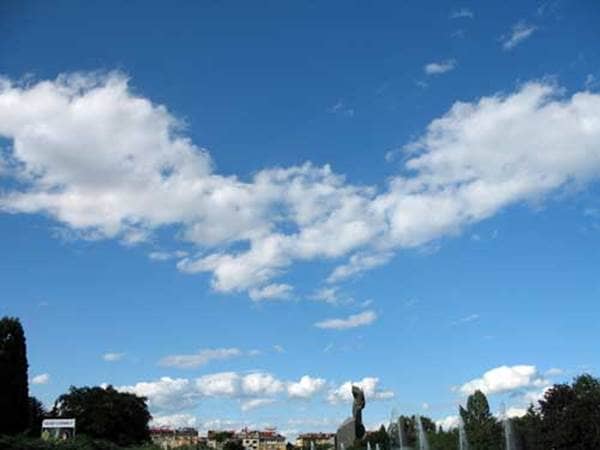 <b>Blessing in Bulgaria</b><br><Br>I took this picture in Sofia, Bulgaria in 2007. I was there to visit my country after six years. The [angel] stayed still about a half hour. Look at the spectacular wings!<br><br><b>Svetlana Blajeva<br>Los Angeles, CA

Send Us Your Angel Sightings
Share your photos and stories with us.

Watch Videos of Angels
A selection of funny, heartwarming, and fun videos inspired by angels.

Your Angel Paintings
See the amazing paintings of angels our readers have created. 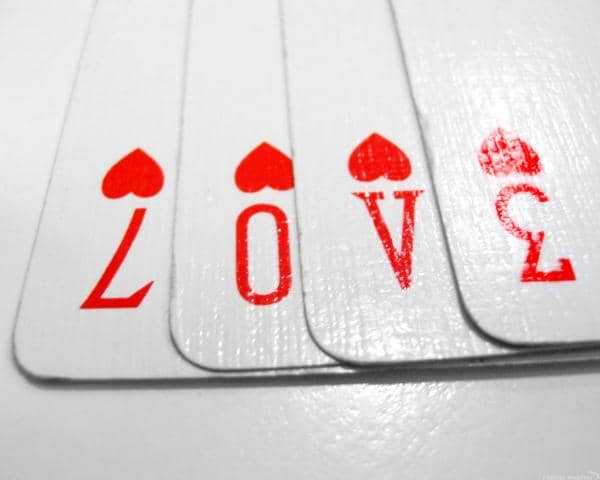 A Message of Healing and Love with Archangel Raphael
It is time to look within and ask yourself is what you currently have for yourself truly what you want. Read next feature >