Angels have always appeared as beloved characters on screens big and small. Check out the popular movies about angels from the past two decades. 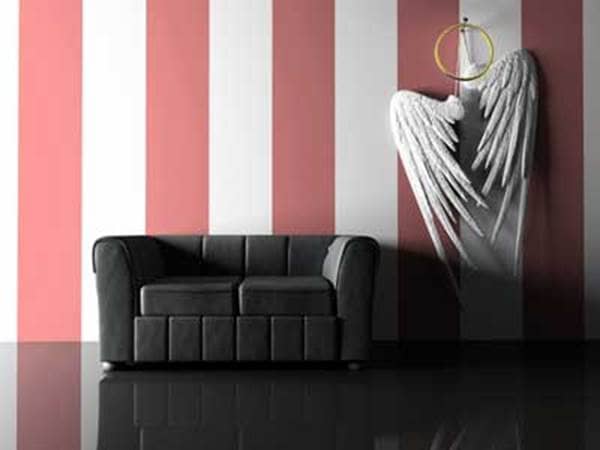 Angels on TV and Film

Angels have always appeared as beloved characters on screens big and small--think Clarence Oddbody from "It's a Wonderful Life" (1946) or Michael Landon in the TV series "Highway to Heaven" (1984-1989). In particular, the past decade or so have been boom times for pop-culture angels. Whether as cheeky cherubs or ethereal executive assistants, they're flexible and diligent, always willing to help. And, we can't seem to get enough of them.

Click through our gallery to see which angels have left the most memorable imprints on TV and film.  See the famous faces that have donned fluffy wings, black trench coats, or flannel shirts to be God's messengers. 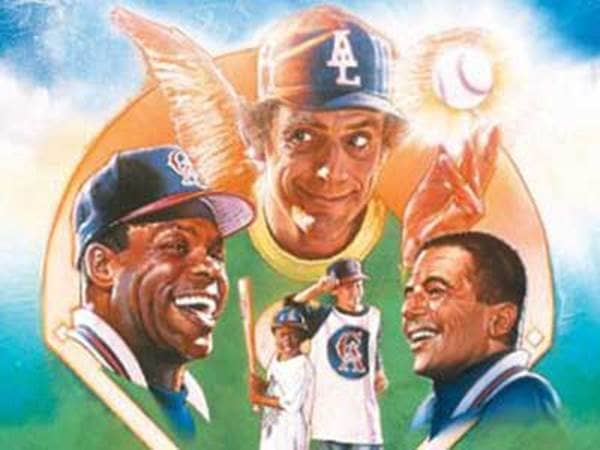 Angel: Al the Boss Angel (Christopher Lloyd)
Mission: In a departure from original 1951 movie, Al and his team of Angels help a boy (Joseph Gordon-Levitt) in foster care bring his family back together. Along the way, the baseball team "California Angels" also have to win the pennant.
Wings and Things: Halos and baseball caps are interchangeable for this heavenly helper.
Powers: The ability to help players make out-of-this world catches and run with sonic speed.
Memorable Line: "We're always watching."
Legacy: Angels can't win championships for you; they bring out the talent and confidence already inside of you. 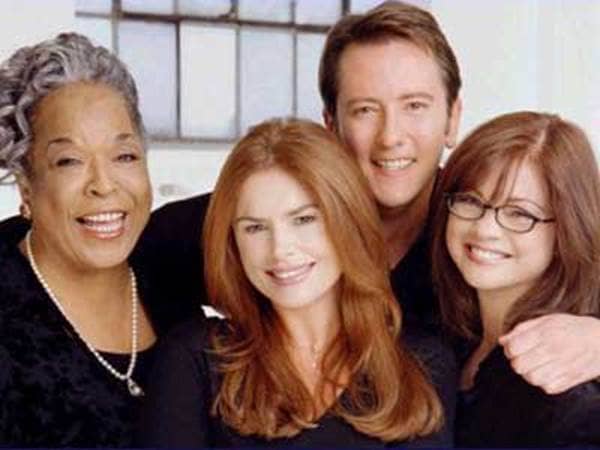 Angels: Monica (Roma Downey), Tess (Della Reese), and Andrew, aka The Angel of Death (John Dye)
Mission: The heavenly triumvirate reminds desperate people that God loves them.
Wings and things: When revealing their true natures, they are bathed in an ethereal glow.
Powers: The ability to dole out miraculous advice and support.
Memorable Line: "There's not a doctor on the face of the earth that can save that man's soul. His faith in God is what he needs now."
Legacy: Fueled the huge angel revival of 1990s. 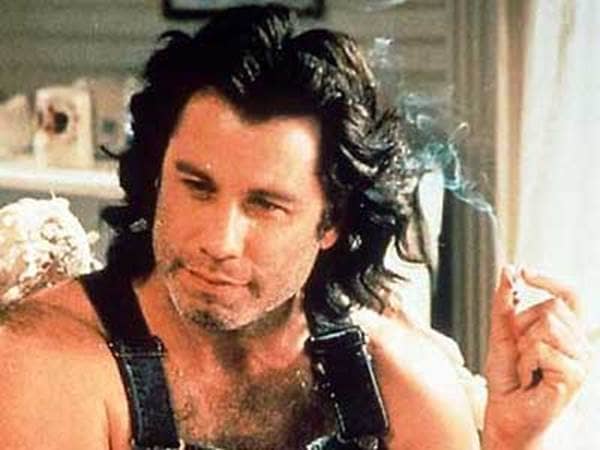 Angel: Archangel Michael (John Travolta)
Mission: Out for a last hurrah on earth before being stuck behind the Pearly Gates, he steers three tabloid reporters toward redemption.
Wings and Things: Comically huge, molting wings. Smells like cookies, despite pack a day smoking habit.
Powers: Has fought the Devil and authored parts of the Bible, but only brings a dog back to life onscreen.
Memorable Line: (From movie poster) "He's an angel...Not a saint."
Legacy: Refreshingly unholy, Michael suggests angels are unconcerned with petty human definitions of sin. 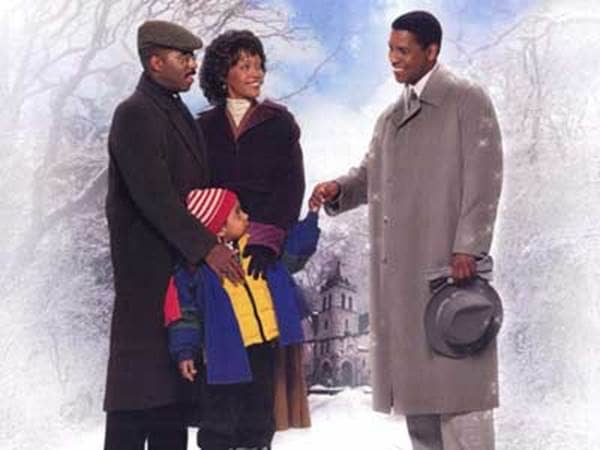 Angel: Dudley (Denzel Washington) Mission: To save Reverend Henry Biggs's church and his faith, without destroying his marriage. Wings and Things: No wings, as they are a bad literary cliché, but Dudley is never without his "Angel's Handbook." Powers: Unlike in the original "The Bishop's Wife" (1947), Dudley performs few feats of angelic magic. He does fix a toy ambulance too well, providing it with a siren that it doesn't originally have. Memorable Line: "You have no idea what the competition is like just to be sent down here." Legacy: Denzel proved that angels can still be devilishly handsome and tempting. 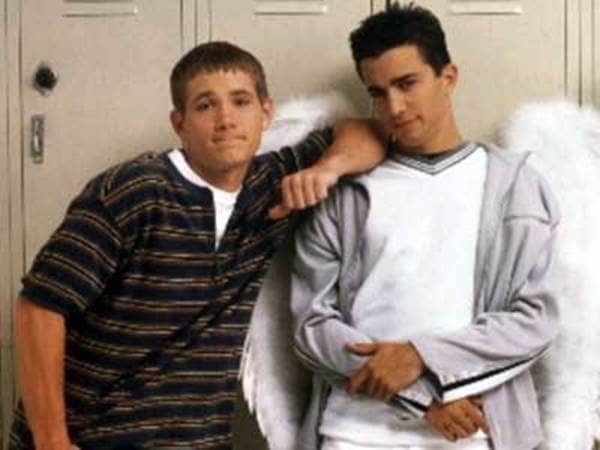 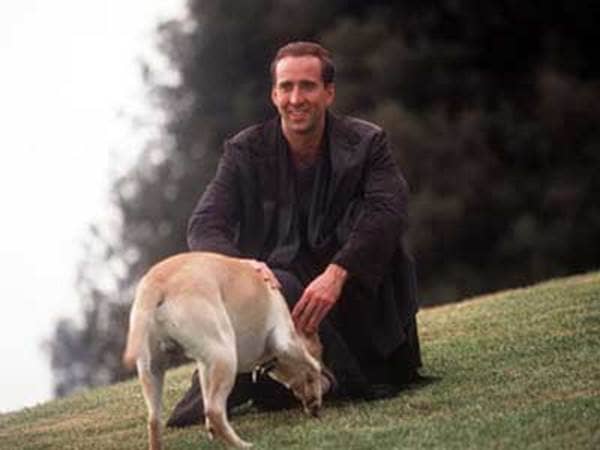 Angel: Seth (Nicolas Cage) Mission: In this remake of "Wings of Desire" (1987), Seth appears to those who are about to die, but ends up falling for a doctor (Meg Ryan) trying to keep those same people from death.Wings and Things: Black trench coat and puppy-dog eyesPowers: Can read human thoughts and reveal himself to themMemorable Line: "I would rather have had one breath of her hair, one kiss from her mouth, one touch of her hand, than eternity without it." Legacy: Women wept as Seth gave up his heavenly existence for human love. This set new standards for romance and gave husbands and boyfriends everywhere angelic agita. 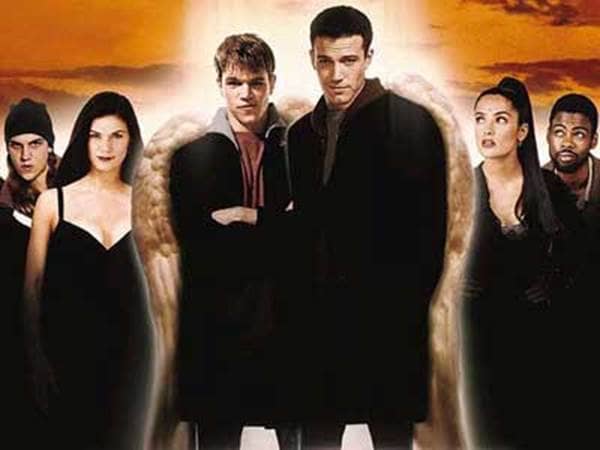 Angels: Bartleby (Ben Affleck), a fallen angel, and Loki (Matt Damon), the Angel of Death. Mission: Exiled to Wisconsin, they discover a portal back to Heaven in New Jersey. Wings and Things: Slacker attire, occasional bombastic breastplates, and powerful wings Powers: Hold their own with WWF superstarsMemorable Line: "I can spot a commandment-breaker a mile away." Legacy: This anti-"Touched by an Angel" satirizes religious folks, not the troubled, as the ones who need to earn their wings. 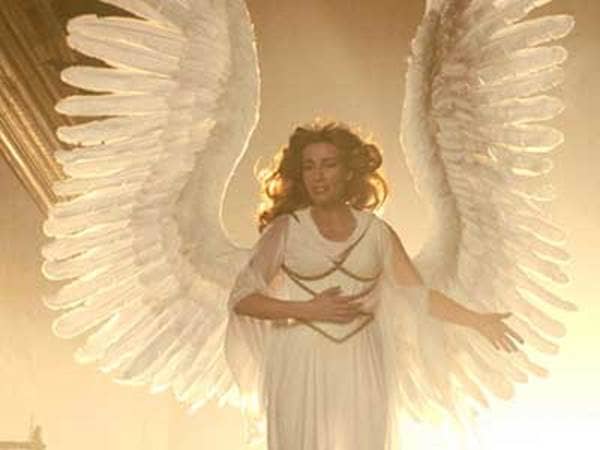 Angel: Angel (Emma Thompson) Mission: In this screen version of Tony Kushner's play, the Angel must alert an AIDS patient named Prior that he is a prophet who can save himself and the rest of the world by stopping humanity's progress.Wings and Things: He/she may have the look of an archetypal angel with flowing locks, Grecian robes, and wings, but this heavenly hermaphrodite is anything but chaste.Powers: Humans experience orgasmic bliss on seeing the Angel.Memorable Line: "Greetings, Prophet! The great work begins! The Messenger has arrived!" Legacy: Even angels, like demons, are a little devilish. 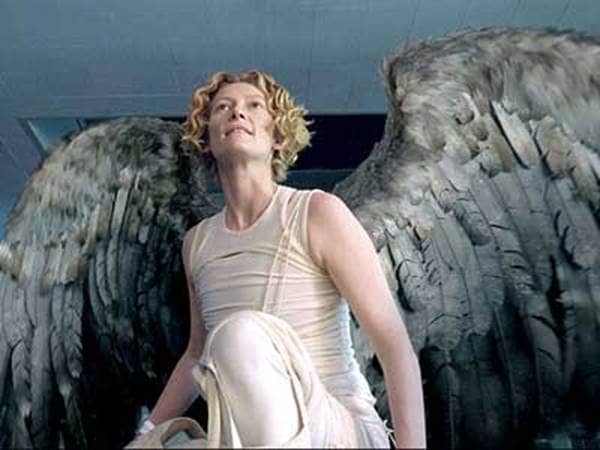 Angel: Gabriel (Tilda Swinton) Mission: To make sure humans earn the Lord's love through hellish tribulations.Wings and Things: Fine suits and double-windsors, but fighting whites come out in the end Powers: As if being God's "gatekeeper" on Earth isn't power enough, this angel can blow you away with a single breath. Memorable Lines: "If sweet, sweet God loves you so, then I will make you worthy of His love." Legacy: The road to Hell is paved with good intentions, but the road to humanity, as Gabriel finds out, is just as hellish. 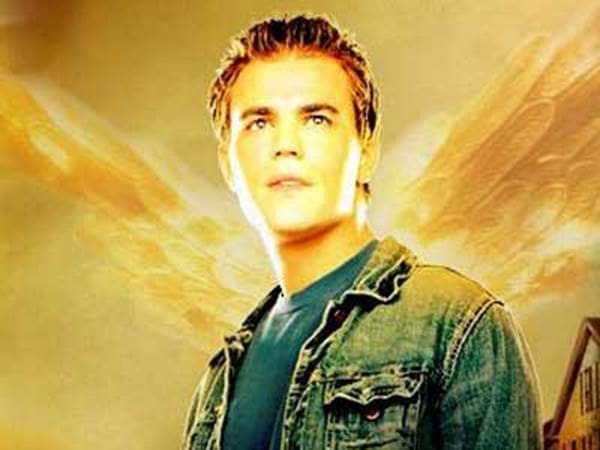 Angel: Aaron Corbett (Paul Wesley) Mission: To redeem fallen angels and return them to Heaven. Wings and Things: Fantastic Sanskrit-like tattoo depicting names of the Fallen AngelsPowers: Sure, this heartthrob of a Nephilim (half-angel, half-human being) can fly, but being able to talk to your dog is so much cooler! Memorable Line: "So you're telling me that in order to save Earth I have to send the Devil back to Heaven?"Legacy: Even angels have teen angst. 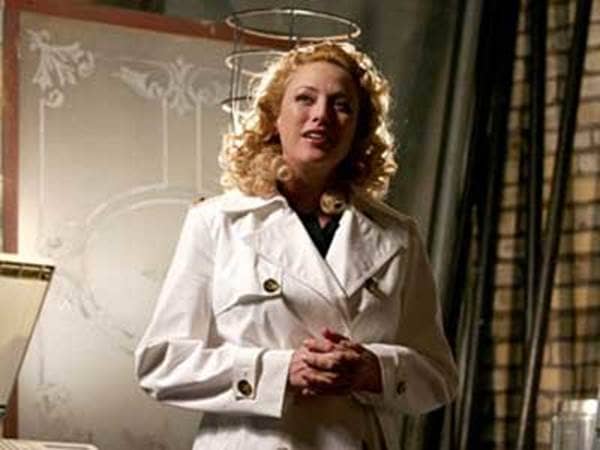 Angel: Dangerous Woman/Angel Asphodel (Virginia Madsen) Mission: To search for souls. Also a metaphor for the death of the radio show.Wings and Things: White trench coat and a monotone voicePowers: The Angel of Death takes on the shape of a woman done in by a penguin joke--a joke she still doesn't get--told on the show. Memorable Lines: "One time I put the face of the Lord on a bowl of oatmeal. But mostly I just take people up to see God." Legacy: Contrary to popular belief, the Angel of Death doesn't get the last laugh. 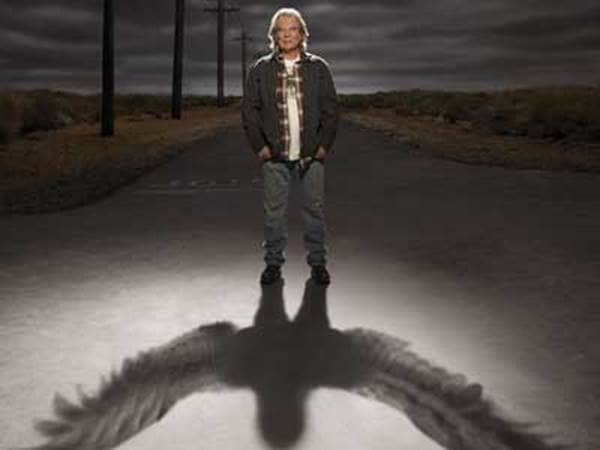 Angel: Earl (Leon Rippy)
Mission: To lead hard-living, hard-talking Oklahoma city cop Grace Hanadarko (Holly Hunter) to faith and redemption.
Wings and Things: With the flannel shirts, chewing tobacco, and beer, you'd expect chicken wings, not angel wings.
Powers: A "last chance" angel who has a way with ultimatums.
Memorable Line: "Do you want God's help or not?"
Legacy: Like a good therapist, Earl challenges Grace and calls her on her "s**t."

Saving Grace Watch clips and explore other features of this hit hour-long drama. 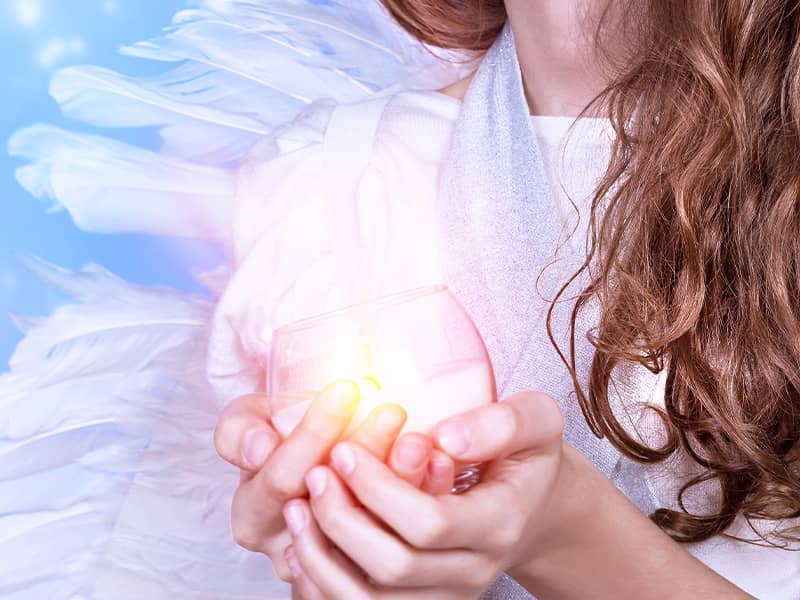 6 Shocking Ways Angels Speak to You Every Day

Angels may be talking to you right now and you don’t even know it. Read next feature >

More from beliefnet and our partners
Add some inspiration to your inbox.
Sign up for Beliefnet's Angel Wisdom newsletter.
From time to time you will also receive Special Offers from our partners
Beliefnet Editor