Stars and angels filled the night of Jesus' birth. Experience the miracle through poems about Mary and Christmas. 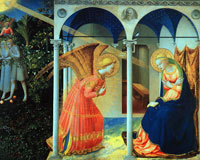 The androgynous visitor is dressed
in a rosy fabric thick as pigment, the tunic
blown back by turbulence to expose its lining,
a blue crescent under the right arm. Angels
are said to be genderless, so there’s a certain
enigma. A wing, the clue to otherness,
arcs in golden space. We are

at several removes from the reality, reading
between the lines, speculating on Angelico’s
speculation. How does an angel look? We are not
Daniel or Zechariah; we have not been shown.
This rendering suggests not celestial power and radiance
but a weight of apprehension; what must be announced
will not be entirely easy news

Wind is part of the picture, gusts
whipping the robes and body along a stretch
of baroque carpet. Gabriel seems to be
advancing up an incline, laboring with
the imperative of message, hair flattened against scalp,
features tense, hands folded tight to the chest,
agitation or awe--it is hard to tell. We can’t see
the heart hammering in the unearthly body,
but the announcement the cracking open of a space
that encircles earth and heaven, must weigh
like a gold boulder in the belly.

How might it feel (if an archangel has feelings) to bear
this news? Perhaps as confounded as the girl, there
in the corner? We worry that she might faint.
Weep. Turn away, perplexed and fearful
about opening herself Refuse to let the wind
fill her, to buffet its nine-month seed into her earth.
She is so small and intact. Turmoil will wrench her.
She might say no.

When we think of God, and
Angels, and the Angel,
we suppose ineffable light.

So there is surprise in the air
when we see him bring Mary,
in her lit room, a gift of darkness.

What is happening under that
huge wing of shade? In that mystery
what in-breaking wildness fills her?

She is astonished and afraid; even in
the secret twilight she bends her head,
hiding her face behind the curtain

of her hair; she knows that
the rest of her life will mirror
this blaze, this sudden midnight.

The Labors of Angels

Upon seeing the painting by Roger Wagner,
The Harvest Is the End of the World and the Reapers Are Angels

Plucking our meager treasures, grain
by grain, we disregard celestial messengers
to our jeopardy.

Sexless and muscular, angels
must wrestle, pitting light against
sinew and darkness. They arrive
without notice, blazing, terrifying us
with good news.

Barren or virgin
we bear our improbable children
and angels raise heaven like a song.
Still, angels can weep;
in your mind’s eye, see
their clear, mineral tears.

Against the indigo sky,
where judgment pulses
like an aneurysm, sunlight spins
horizontal threads across the field until

the yellows in the standing wheat stalks
match the low light. Harvester angels
cast huge wings of shadow,
scything a crop, lifting it
from the skin of an acre
like fleece from a sheep's flank.

It is only later that they delicately
unhook teasel, thistle, burdock
from the heavy gold grain.

Glimmers from stars
have flicked all year long,
and now, at its close,
when the planets
are shining through frost,
radiance runs like music in the bones,
and the hear keeps rising
at the sound of any song,

or with the silver calling
of a bell,
rounding, high and clear,
flying, falling,
sounding the death knell
of our old year,
telling the new appearing
of Christ, our Morning Star.

Now, burst,
all our bell throats!
Toll, every clapper tongue!
Stun the still night!
Jesus himself gleams through
our high heart notes
(it is no fable).
It is he whose light glistens in each song sung,
and in the true
returning again
to the stable
of all of us: shepherds,
sages, his women and men,
common and faithful,
wealthy and wise,
with carillon hearts,
and, suddenly, stars
in our eyes.