Experts agree that your first and best line of defense when driving is to be alert and aware of your surroundings. But in the real world, where distractions and bad weather can conspire against you, it helps to have some backup. Fortunately, automakers have been hard at work on cutting-edge technology that can keep you and your family safe. Some of these features can even intervene to keep you from driving off the road or into another vehicle. Think of them as an electronic guardian angel. We partnered with Honk and searched through the hundreds of new cars to pull together a list of the most advanced safety features available on the road today.

Experts agree that your first and best line of defense when driving is to be alert and aware of your surroundings.  But in the real world, where distractions and bad weather can conspire against you, it helps to have some backup.

Fortunately, automakers have been hard at work on cutting-edge technology that can keep you and your family safe.  Some of these features can even intervene to keep you from driving off the road or into another vehicle.  Think of them as an electronic guardian angel.

We partnered with Honk and searched through the hundreds of  new cars  to pull together a list of the most advanced safety features available on the road today.

Have you ever reached for something in the car only to find that you've veered from your lane once you look back up?  Several automakers are hoping to avoid this dangerous situation through a feature called Lane Departure Warning.

These systems use a camera to look ahead and keep track of where your vehicle is in relation to lane markings.  If you veer too close without using your turn signal or without deliberately turning the wheel, the system will beep to alert you.

Infiniti's version of the technology goes one step farther and can gently apply the brakes on the opposite side of the car to prevent it from leaving the lane.  It’s available on the Infiniti FX and EX crossovers and the M sedan.

For the time being, Lane Departure Warning systems are fairly expensive and are found mainly in high-end luxury cars.  Prices are coming down, though, and you can now find the feature on more reasonably priced cars, like the Buick Lucerne or Volvo S60. 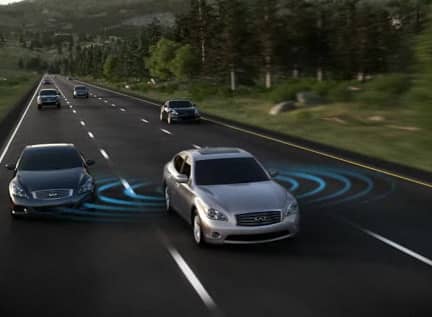 You can't avoid what you can't see.  Blind Spot Detection systems use radar sensors to detect cars that are either in your blind spot or that are approaching very quickly.

Different automakers have different ways to alert the driver but most include some kind of warning light on or near the side-view mirrors.

Infiniti's take on the technology goes one step farther and will actively try to prevent you from side-swiping another vehicle.  The system will carefully activate the brakes on the opposite side of your car, tugging you back if you make a wrong move.  This can buy precious fractions of a second for the driver to react accordingly.

Blind Spot Detection is becoming more affordable with each passing model year.  You can now find the technology on several wallet-friendly vehicles, like the  Ford Taurus  and  Buick LaCrosse . 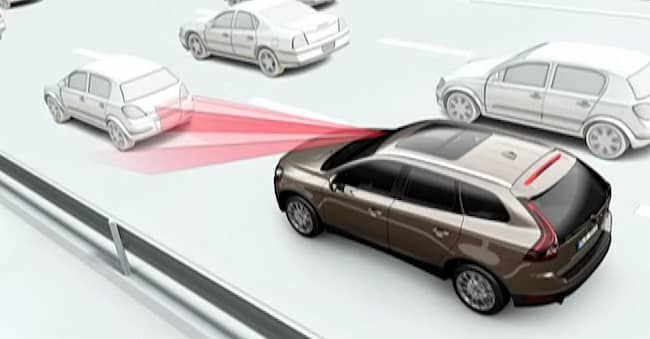 Collision Mitigation systems use a combination of cameras, lasers, and radar to watch out for obstacles ahead.  If a collision is imminent, the system will alert the driver.  And if the driver fails to react to the warning, some systems can even apply the brakes to either avoid the accident entirely or to at least minimize the severity of the hit.

The Volvo XC60 is one of the first cars to make a feature like this standard.  It’s “City Safe” system can fully stop the car at speeds up to 9mph and can minimize impacts at speeds up to 18mph.

It's important to note that Collision Mitigation systems are not foolproof, though.  It takes a moment or two for the sensors to detect new obstacles and sometimes rain or snow can confuse the sensors and temporarily cause the system to turn off. 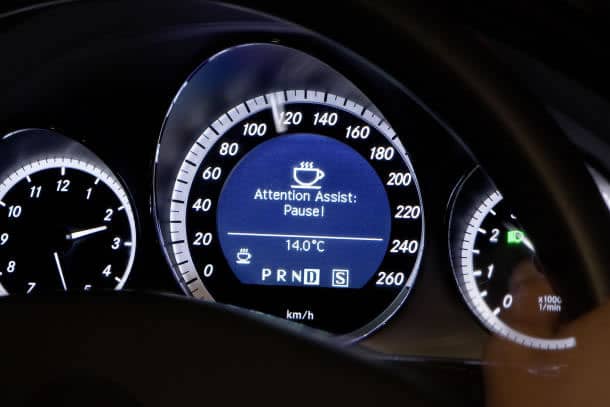 Some of the most deadly accidents are caused by drivers who fall asleep at the wheel.  If a car leaves the pavement at high speeds, it’s at much higher risk for a dangerous rollover.

If you're feeling drowsy, the best thing to do is pull over and get the rest that your body needs.  To help you know when enough is enough, some automakers have developed systems that watch out for drowsiness and then alert the driver.

Lexus has a system that uses a small camera to watch the driver's face.  The system knows that people blink more slowly when they are tired and can alert you to pull over when your eyelids start to droop.

33,963 people died in motor vehicle crashes last year.  The National Highway Traffic Safety Administration believes that many of these deaths are unnecessary, estimating that mandatory Electronic Stability Control systems could save an estimated 10,300 lives (and 238,000 injuries) per year.

Electronic Stability Control (ESC) systems use a variety of sensors to compare where the driver wants the vehicle to go and where the vehicle is actually going.  If there's a difference - meaning that the vehicle is starting to skid out of control - the ESC system steps in and carefully activates one or more brakes to halt the skid and keep the vehicle in control.

Stability control systems have been available on some vehicles for over a decade now and their effectiveness has been proven.  Mercedes data shows that the technology can reduce accidents by over 30%.  Toyota estimates even higher, at 50%.

The life-saving benefits of ESC are so clear that the federal government has passed regulations requiring that all new cars and trucks have the feature as standard equipment by 2012.

Until then, make sure that the car you're shopping for is equipped with ESC.  In cases where you have to pay for the feature as an optional extra, keep in mind that the few hundred dollars you spend on ESC is probably cheaper than the insurance deductible you’d have to pay after an accident.

If you’ve ever driven down a deserted road at night, you know that surprises just beyond the reach of your headlights can appear when you least expect them.

Some automakers have begun to offer Night Vision systems, similar to what the military uses for nighttime combat missions.  These devices use an infrared camera to look far down the road and display large objects with great clarity.

Many of these systems can even detect and highlight human forms, helping you to avoid that jogger or bicyclist exercising alongside the road.

Ford deserves a special mention for their brilliant ”MyKey” feature.  It's intended to keep teen drivers safe and lets you assign separate keys for each driver in your household.  Each key can be coded to enforce specific driving restrictions.

If you want to keep your teen from driving too fast or from getting distracted, you can set a maximum speed for the car and a maximum volume for the audio system.

MyKey will also mute the audio system until seat belts are buckled and will chime earlier when the fuel level starts to run low so that Junior doesn’t run out of gas.  Most importantly, MyKey prohibits the disabling of critical accident-avoidance features, like the Electronic Stability Control system.

In addition to keeping your teens safe, MyKey also comes in handy if you need to valet park your car and don’t want the valet to go for a Ferris Bueller-style joy ride. 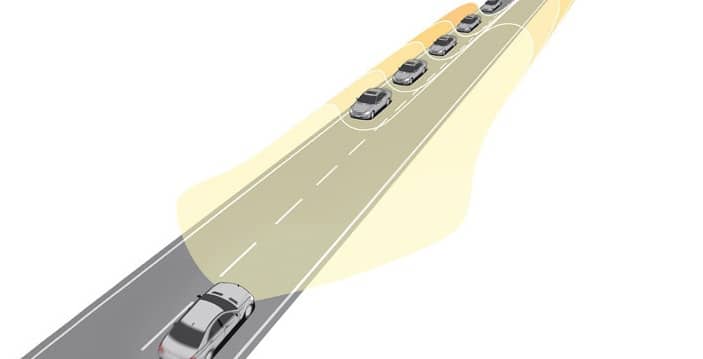 When’s the last time you used your high beams?  If you’re like most people, you’re not using them enough.  A study by the US Department of Transportation found that high beams are used in less than one quarter of the instances in which they should have been.

Most people say that they forget to switch on their brights or that they’re afraid that they may blind other drivers.  Whatever the case may be; relying on your low beams in some situations can be dangerous because you won’t have enough time to see and react to obstacles.

A new safety system can automatically switch on your high beams when conditions allow.  It uses a special camera to watch out for the headlights and brake lights of other vehicles, ensuring that you’ve got the best possible visibility without having to worry about blinding other motorists.

Auto high beams can be found on many different vehicles, from the Chrysler 300 to the Mercedes S-Class. 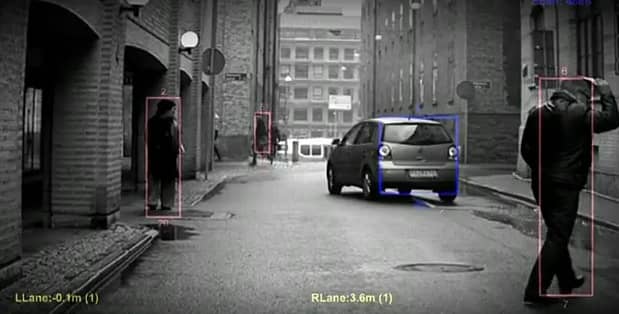 According to safety data from Volvo, 14% of all traffic fatalities in Europe are pedestrians.  Bad weather or a partially blocked view can make it hard for drivers to see and react to pedestrians.

Pedestrians have traditionally been very difficult to detect by radar or laser, so the latest technology uses a camera to look around for people much like a human driver would.  The system uses special software to identify pedestrians based on their shape and movements and then keep track of them until the car passes.

Volvo is debuting an advanced Pedestrian Detection system on their new S60 sedan that can both alert the driver and automatically apply the brakes if he doesn't react to avoid the pedestrian in time. 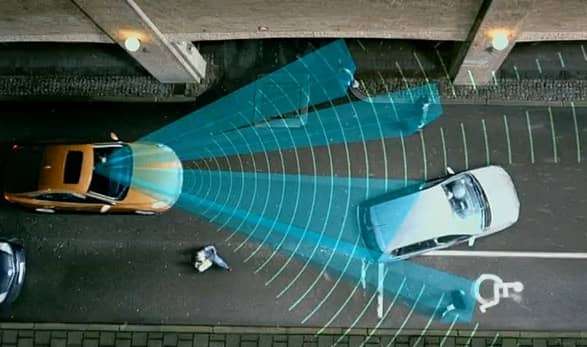 Until automakers can find a way to bring costs down, many of the advanced technologies explored in this article will remain on expensive luxury cars.  But there are still several things that you can do as a car owner to keep you and your family safe when out on the road.

Most importantly, make sure that your tires have sufficient tread and are properly inflated.  It sounds simple, but this helps your car to maintain traction in emergency situations and can help you to reduce braking distances if you have to stop suddenly.

Make sure that your side-view mirrors are also adjusted properly.  If you can see the sides of your car, your mirrors are set too close.  You should adjust them so that you have one large field of vision that extends seamlessly from the left to the center to the right.  Ask a friend to stand ten feet behind the car and walk to the left and right as you adjust your mirrors.  There should be virtually no interruption in your view as she paces back and forth.

Last, it's important to remember that the most important piece of safety equipment in your car is you, the driver.  Keep distractions to a minimum and do your best to stay alert and aware of your surroundings.

MATT CRAGIN Matt Cragin manages the community on car website Honk.com, enabling him to keep his finger on the pulse of automotive world. Always ready to chat cars, Matt can be found on Twitter and Car Blog. Looking for the perfect car? Honk puts the fun back into car shopping with the latest information and opinions from real people like you.