The Best Way to Give

How one online charity is making a difference in public schools, one pencil at a time.

Beliefnet
How many people do you know who would shell out hundreds of dollars per year just to do a job they're not getting paid much to do in the first place? Your answer just might depend on how many teachers you know.

Nationally, teachers spend over $1 billion a year on classroom supplies, everything from chalk to books to microscopes. According to a 2001 study by Quality Education Data, Inc., on average, teachers in grades K-8 spend about $520 of their own money annually, with new teachers, who make the lowest salaries, spending about $700.

Enter Charles Best, a 28-year-old teacher at Wings Academy, a high school in the economically depressed South Bronx. Four years ago, Best started the Internet-based non-profit, DonorsChoose.org, for teachers in New York City. Earlier this year, he was able to expand it for teachers in North Carolina. Here's how it works: Teachers submit proposals for classroom supplies, which are then reviewed and posted on the site. Potential donors can then browse these proposals and, if they choose, fund them fully or partially. Donors then send their financial contributions to DonorsChoose, which purchases the items for the teacher and ships them directly to the school. In return, contributors receive photos of the students using the gift and thank-you notes from the teacher and the entire class. 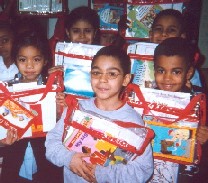 Kids pose with their new bags full of books, funded by a DonorsChoose citizen philanthropist.

Initially, Best financed many of the proposals himself and put much of his salary toward the organization's administrative costs. He even went so far as to give up his apartment and move back in with his parents. Who or what inspired him? "My dad was an inspiration to me growing up," he says, "because of his values and character. He was a corporate lawyer, but he encouraged me to do whatever it was that I'd most enjoy, not to care about money."

Best was determined that DonorsChoose succeed, especially since its model was unlike many online charities where donors give money and don't see the direct results of their contribution.

"I think not only do [our contributors] want to choose where their money is going to go," says Best, "but they want to see the impact that they've had and want to know that dollars were spent as intended."

The letters from recipients are both heartfelt and heartwrenching. One teacher wrote to her donor, "Many of my students live in shelters and do not possess books to read. I require my students to read for at least thirty minutes each night, and sadly I have had at least three students approach me and inform me that they didn't have any books at home..."

A student in her class added, "Now I get to take my books home over the weekend to show my parents how I have improved. Thank you for thinking about us. Your kindness is great. Your parents should be very proud of you."

Cindy Rosado, a first-grade English as a Second Language teacher at P.S. 169 in the Sunset Park section of Brooklyn, applied to DonorsChoose to supplement the inadequate supplies she was given for her classroom. Rosado was used to spending $2,000 a year of her own money on classroom materials.

"It's been the best resource," she says. "It's the first time that somebody asked me as a teacher what would help me--and didn't then give me a million guidelines and restrictions. I've had people say, 'What would you like?' and then before I open my mouth they've given me a list of what I was allowed to get. I've never had anybody just say, 'What do you want to do and how can I help?' No problem is too small or too big."

DonorsChoose accepts almost all proposals, regardless of the amount of money needed. Although the average request runs about $500 to fund, proposals range from a $60 request for pencils to a $20,000 proposal for a new school playground, which was underwritten in about three months by a wealthy couple in Manhattan.

According to Best, there are three basic criteria for proposals: "The first is that the materials have to be for students, so we can't accept a proposal for teacher education," he says. "The materials have to be tangible resources for a student-centered experience. Number two is that proposals can't discriminate. And number three is that proposals can't proselytize for a particular denomination or religious group."

Teacher Cindy Rosado's first application to DonorsChoose was prompted by a little girl in her class whose father died on 9/11. The first-grader had written a story about her dad, which Rosado found crumpled up in the child's book bag. Rosado felt sad that, unlike the better-funded schools she had observed, her class had no book-binding machine to publish student work so that it could be displayed with care and respect.

She believed a book-binding machine would help boost student morale; her hope: that the more effort put into publishing and presenting a student's work, the more the quality would improve. A fellow teacher suggested she send a proposal to DonorsChoose to purchase the $300 book-binding machine.

Since then Rosado has received $7,000 worth of supplies-including the machine-as well as books and art materials.

Best has expansion plans in the works for his organization. Colorado, Chicago, and the Bay area of California are the next areas that the organization will serve. He says that he hopes to eventually be able to serve all schools in the United States to help with what he says is "definitely a national problem."

"[DonorsChoose] has really taught [the children] that people outside of our little area care about them," notes Rosado. "We never know who's going to be the next president, the next governor. People are very generous-they just don't always know where to go to help."