Amazing Prayers of the New Testament

These amazing prayers of the New Testament show us how believers in the past have prayed while offering valuable insights into our daily lives!

At that time Jesus said, "I thank you, Father, Lord of heaven and earth, because you have hidden these things from the wise and the intelligent and have revealed them to infants; yes, Father, for such was your gracious will."

And this is my prayer, that your love may overflow more and more with knowledge and full insight to help you to determine what is best, so that on the day of Christ you may be pure and blameless, having produced the harvest of righteousness that comes through Jesus Christ for the glory and praise of God.

For this reason, since the day we heard it, we have not ceased praying for you and asking that you may be filled with the knowledge of God’s will in all spiritual wisdom and understanding, so that you may lead lives worthy of the Lord, fully pleasing to him, as you bear fruit in every good work and as you grow in the knowledge of God. May you be made strong with all the strength that comes from his glorious power, and may you be prepared to endure everything with patience, while joyfully giving thanks to the Father, who has enabled you to share in the inheritance of the saints in the light. He has rescued us from the power of darkness and transferred us into the kingdom of his beloved Son, in whom we have redemption, the forgiveness of sins.

And whenever you pray, do not be like the hypocrites; for they love to stand and pray in the synagogues and at the street corners, so that they may be seen by others. Truly I tell you, they have received their reward. But whenever you pray, go into your room and shut the door and pray to your Father who is in secret; and your Father who sees in secret will reward you. When you are praying, do not heap up empty phrases as the Gentiles do; for they think that they will be heard because of their many words. Do not be like them, for your Father knows what you need before you ask him.

‘Pray then in this way:
Our Father in heaven, hallowed be your name.
Your kingdom come.
Your will be done, on earth as it is in heaven.
Give us this day our daily bread.
And forgive us our debts, as we also have forgiven our debtors.
And do not bring us to the time of trial, but rescue us from the evil one.
For if you forgive others their trespasses, your heavenly Father will also forgive you;
but if you do not forgive others, neither will your Father forgive your trespasses

After Jesus had spoken these words, he looked up to heaven and said, ‘Father, the hour has come; glorify your Son so that the Son may glorify you, since you have given him authority over all people, to give eternal life to all whom you have given him. And this is eternal life, that they may know you, the only true God, and Jesus Christ whom you have sent. I glorified you on earth by finishing the work that you gave me to do. So now, Father, glorify me in your own presence with the glory that I had in your presence before the world existed.

‘Righteous Father, the world does not know you, but I know you; and these know that you have sent me. I made your name known to them, and I will make it known, so that the love with which you have loved me may be in them, and I in them.’

After they were released, they went to their friends and reported what the chief priests and the elders had said to them. When they heard it, they raised their voices together to God and said, ‘Sovereign Lord, who made the heaven and the earth, the sea, and everything in them, it is you who said by the Holy Spirit through our ancestor David, your servant:

“Why did the Gentiles rage,
and the peoples imagine vain things?
The kings of the earth took their stand,
and the rulers have gathered together
against the Lord and against his Messiah.”

For in this city, in fact, both Herod and Pontius Pilate, with the Gentiles and the peoples of Israel, gathered together against your holy servant Jesus, whom you anointed, to do whatever your hand and your plan had predestined to take place. And now, Lord, look at their threats, and grant to your servants to speak your word with all boldness, while you stretch out your hand to heal, and signs and wonders are performed through the name of your holy servant Jesus.’ When they had prayed, the place in which they were gathered together was shaken; and they were all filled with the Holy Spirit and spoke the word of God with boldness. 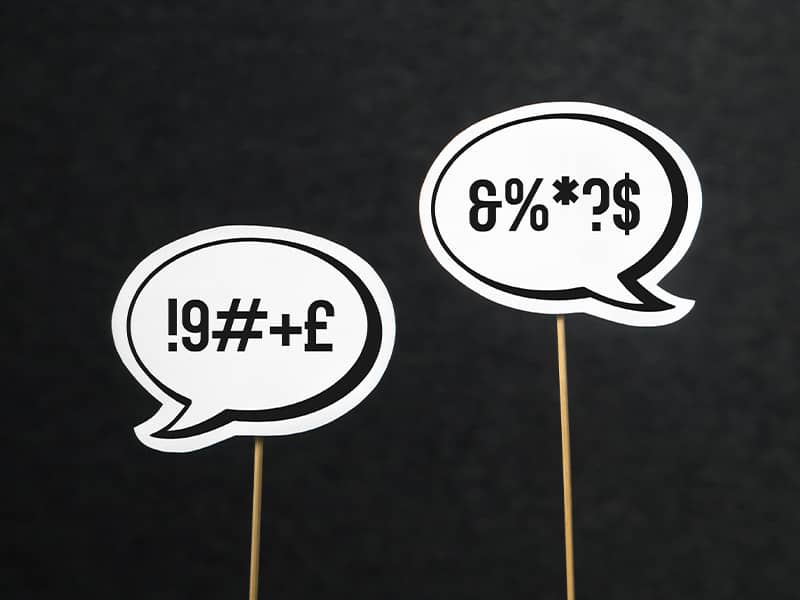 Is it OK for a Christian to cuss?
One of the first Ten Commandments is clear that we’re not to use Almighty God’s name in vain. But what does the Bible really say about telling jerks to “go to ...!” or insulting them with taunts that their mothers were not as pure as the driven snow? Read next feature >