These stars honor Jesus through their amazing work!

Hollywood's golden boy of the moment, writer and actor Tyler Perry, seems to have a new movie or TV show coming out daily. Though well known for years among urban African Americans, Perry burst onto the Hollywood scene in 2005 with "Diary of a Mad Black Woman," which took in more than $50 million after being made on a $5.5 million budget. Since then, he's come out with the films "Madea's Family Reunion" (2006) and "Daddy's Little Girls" (2007). His second movie release of the year, "Why Did I Get Married?" arrives this month. He's also conquered the small screen, producing the sitcom "Tyler Perry's House of Payne," for which TBS reportedly gave him a whopping 100-episode commitment. Citing filmmakers who keep their faith "in the closet," Tyler told Beliefnet last year, "I'm not afraid to have a character say, 'I am a Christian,' or 'I believe in God,' because I think they represent real people on this earth."

Justin Bieber has been dominating the teen market since 2008.  He was raised as a Christian by his single mother who credits God's grace as the reason for his success.  From the beginning Justin was never shy about expressing his faith and did so by including songs such as “Pray” on his album.  Justin has used his platform as a pop artist to spread the gospel in interviews and to encourage faith in teenagers through a Bible study that accompanied his film Never Say Never.

Not one to wear his faith on his sleeve, Denzel Washington surprised many by lending his voice to "The Bible Experience," an audio Bible featuring some of the country's top African-American stars. (Washington and his wife Pauletta narrate The Song of Songs.) The two-time Oscar winner is in the upper echelon of Hollywood actors, receiving a $20 million paycheck per movie. But his superstar status rises far above mere moviemaking. A 2006 Barna study found that Washington is better known and better loved than any living American religious figure. The son of a Pentecostal minister, he has reportedly donated $2.5 million to his church, the West Angeles Church of God in Christ. It was in the parking lot of that church that Washington landed the "Bible Experience" gig. Casting director Robi Reed told the L.A. Times that when she saw her fellow churchgoer and started describing the project, he interrupted her to say, "I have to do it."

Despite everything--a drunken-driving arrest, an anti-Semitic outburst, movies brimming with graphic violence--Mel Gibson still tops the list of most powerful Hollywood Christians. His "Passion of the Christ" changed everything for Hollywood when it comes to matters of faith, waking up the powers-that-be to the box office potential of the Christian audience. Since then, "making the next 'Passion'" has been Hollywood's own unique Holy Grail quest, resulting in movies successful ("The Chronicles of Narnia") and disappointing ("The Nativity Story"), and leading to the creation of FoxFaith and other religion-focused studio subsidiaries. And even after Gibson's Summer '06 PR nightmare, his "Apocalypto" went on to make a reported $50 million--and was seen by many as a Christian allegory, despite its ancient Mayan setting.

Garner, NC's own Scotty McCreery won the hearts of America on American Idol.  The then 17 year old appealed to the masses with his deep country baritone and boyish good looks.  Through the show McCreery was never shy about his Christian faith, he was willing to sing gospel songs and visibly disturbed by the wild sexuality of pop star Lady Gaga.  So much so that he felt the need to kiss his cross afterwards.  He and his top competition LAuren Alana both talked publicly about their faith during the show.

Jim Caviezel is most known for his role as Jesus in the Passion of the Christ, and it isn’t surprising that he is an intensely Catholic man.  He has sense moved into roles in crime dramas and other roles, but they are less representative of his beliefs.  Raised in Washington, his Catholic roots ran deep in his family.  Playing Jesus in such a monumental film made for a tough time in his career in a Hollywood that seemed to be miffed by the role, but he has since turned the corner.  In addition to acting, he has been a speaker at religious meetings and conferences since playing the role of Jesus.  Caveiezel has also adopted two disabled children.

Well known for his liberal political activism, Martin Sheen is a Catholic who chose his stage name in honor of Catholic theologian Fulton J. Sheen. Though he strayed from the Church, he returned after falling seriously ill during the filming of "Apocalypse Now." Sheen, an Emmy and Golden Globe winner, has often been quoted linking his faith and his activism. "You know, the essence of the Gospel of Jesus was extremely radical, and that's why they killed Him," he told one interviewer. To another he said, "It doesn't really matter how much of the rules or the dogma we accepted and lived by if we're not really living by the fundamental creed of the Catholic Church, which is service to others and finding God in ourselves and then seeing God in everyone--including our enemies." Most recently, he played President Josiah Bartlett on "The West Wing" as a liberal Catholic who was often known to debate theological issues and quote the Bible. Since his TV presidential administration ended, he's appeared in the Oscar-winning "The Departed" and made news protesting the Iraq war with Cindy Sheehan.

You know her as the harried wife and mother--and Ray Romano's comic foil--in the popular sitcom "Everybody Loves Raymond," a role for which she was awarded two Emmys. Off-screen, she's not shy about making her faith or her opinions heard. Born a Catholic, she embraced evangelical Protestantism as an adult, and now attends a Presbyterian church and advocates on behalf of an anti-abortion group called Feminists for Life. Since "Raymond" ended, she has emceed a Christian comedy tour featured in the DVD "Thou Shalt Laugh," and told Beliefnet last year that she had "an opportunity to get back to reading and studying and praying more, which I didn't have much time for" while doing the show. That period of calm didn't last long, however: She returned to TV this fall, starring opposite Kelsey Grammer in the new sitcom "Back to You."

Best known as the producer of such blockbusters as the "X-Men" trilogy, "The Planet of the Apes," and "The Fantastic Four," Ralph Winter has also produced such Christian fare as "Left Behind," "Thr3e," and "The Visitation" and works regularly for FoxFaith. He is also a frequent speaker at Christian conferences and prayer breakfasts. Of his unofficial but unrelenting role as a liaison between Hollywood and the Christian community, Winter told Beliefnet prior to the final "X-Men" release, "I have been placed in this job for a purpose, and I am just trying to make great movies and keep my eyes on Him. I don't deserve any praise....It is definitely all God's hand that I get to do this. And who knows how long this will last? He may choose someone else." Having brought in a reported career total (so far) of $1.6 billion, here's betting that Hollywood's decision-makers will stick with Winter.

She's played such iconic women as Rosa Parks, Betty Shabazz (Malcolm X's wife), and Tina Turner, and voiced Queen Esther in the audio "The Bible Experience." Along the way, Angela Bassett has picked up a Golden Globe and been nominated for an Oscar, an Emmy, and many other major awards. Like Denzel Washington, Bassett is a longtime worshipper at the West Angeles Church of God in Christ. Though she rarely speaks to the media about her faith, Bassett recently told the L.A. Times, "When you realize that every breath is a gift from God. When you realize how small you are, but how much he loved you. That he, Jesus, would die, the son of God himself on earth, then you...you just weep." She added, "Loving God is like my being black. I just am. [No one says] 'You know what? I'm gonna be blacker today!' It's my culture. It's not something I put on or take off or show more. You just communicate that in the way you live your life."

Kristin Chenoweth's career has ranged from Broadway--where she was a Tony winner (for "Wicked")--to TV ("The West Wing," the short-lived "Kristin") to movies ("The Pink Panther," "RV," "Bewitched"). Last year, she was even fictionalized in ex-boyfriend Aaron Sorkin's "Studio 60 on the Sunset Strip," in which the character Harriet, the beautiful evangelical who stood firm in her faith while defying stereotypes of the closed-minded Christian, was widely assumed to be based on Chenoweth. She has spoken at Women of Faith conferences and released an album of Christian inspirational music called "As I Am." Having grown up dreaming of success in Christian music, Chenoweth has said, "I'm an actress and a singer and I'm also a Christian. We're not all crazy right-wingers. I just want to be like Jesus, forgiving and loving and nonjudgmental, accepting of everyone even if they don't agree."

Sly Stallone is known for his tough guy image in the movies Rocky, Rambo, and even the recent Expendables.  Though his roles, especially Rocky, have sometimes shown a softer side.  Sly grew up in the church, but as his career moved forward he left.  He began attending church again in the 2000s, and it became a large, somewhat shocking, part of his role in the latest Rambo film.  In the film the atheist Rambo is tasked with escorting Christian through a hostile territory so that they can bring their faith, and their medicine, to the natives.  The character is influenced by their faith, which may be an action movie plot, but seems to nail Stallone’s own faith journey pretty squarely.  An action movie about attending church?  Sure! 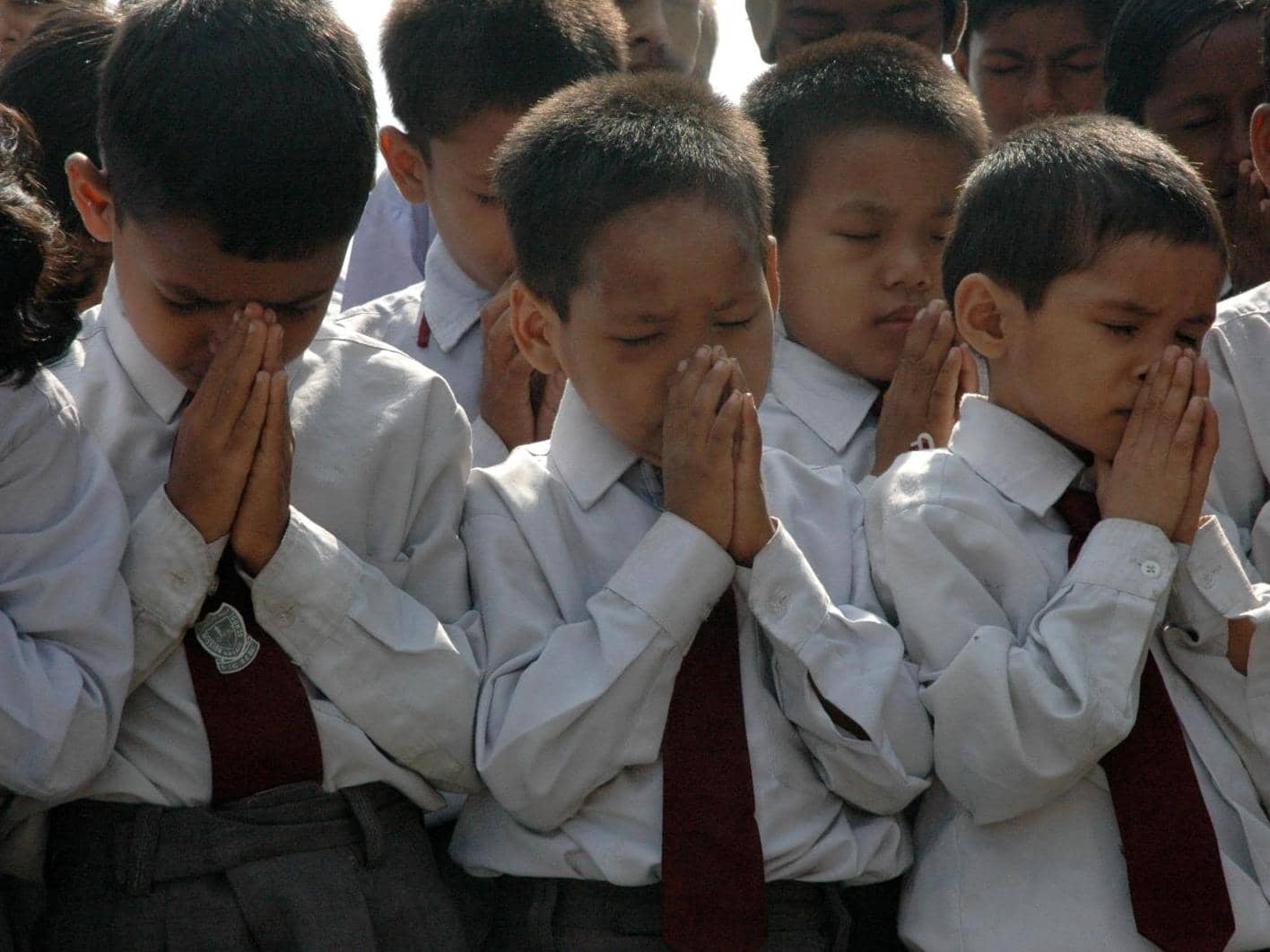 21 Beautiful Verses to Heal a Broken Heart
The Bible is full of wonderful assurance to those of us whose hearts are broken. Read next feature >