Will Congress Save Our Soldiers' Right to Pray?

“Our servicemen and women put their lives on the line every day in order to protect our constitutionally guaranteed rights, including the expression of our beliefs. Congress must ensure that we are protecting them as well." 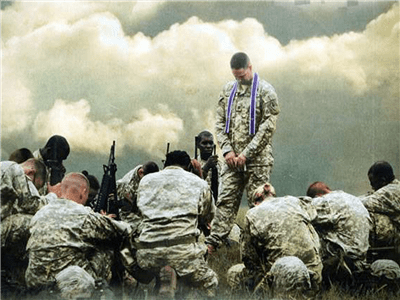 Why are members of Congress proposing laws prohibiting the Obama Administration from denying America’s military the freedom of religion that they fight to defend? For example, U.S. Senator Mary Landrieu (D-Louisiana) would forbid the federal government from withholding funds from military groups that engage in voluntary religious activity. Her measure is called the Freedom to Pray Act.

Meanwhile, Senator Ted Cruz (R-Texas) condemns the Administration for threatening to veto legislation that would guarantee members of the military the right to freely express their religious beliefs, Politico magazine reports. “We have reports of servicemen and women being told that, ‘If you share your faith with others, you will face disciplinary action and perhaps court martial,’” said Cruz. “The idea that we would say to men and women who are risking their lives that they have to check their First Amendment rights at the door and give up the right to speak the truth and to speak and defend their faith -- it’s wrong and it’s unconstitutional.”

Congressman John Fleming (R-Louisiana) would require the Pentagon to recognize “conscience, moral principles or religious beliefs of” America’s military." The White House Office of Management and Budget says such legislation would limit the “discretion of commanders to address potentially problematic speech and actions within their units.”

Senator Mike Lee (R-Utah) calls for “protection of rights of conscience of members of the Armed Forces and chaplains.” His legislation "clarifies that expressions of belief that do not have an adverse impact on military readiness, good order, and discipline are to be accommodated." The Pentagon responds that no religious group has been singled out for persecution and that “service members can share their faith (evangelize), but must not force unwanted, intrusive attempts to convert others of any faith or no faith to one’s beliefs (proselytization).”

That does not settle the issue, says Mollie Hemingway in the Wall Street Journal. "For one thing, the Pentagon statement clarifying that military personnel would not be court-martialed if they 'evangelize' also said that 'proselytization' is considered a Uniform Code of Military Justice offense. Yet the definitions of those two words are almost identical: Merriam-Webster defines proselytization as 'to recruit or convert especially to a new faith, institution, or cause' and evangelize as 'to preach the gospel to or to convert to Christianity.' "

“Our servicemen and women put their lives on the line every day in order to protect our constitutionally guaranteed rights, including the expression of our beliefs. Congress must ensure that we are protecting them as well," says Lee. Landrieu became alarmed after she heard the Young Marines program in Bossier Parish, Louisiana, could lose its federal money because there was voluntary prayer and the mention of God. According to the Young Marines of the Marine Corps League website, members must agree to "keep myself clean in mind by attending the church of my faith" and to pledge that "I shall never do anything that would bring disgrace or dishonor upon my God, my Country and its flag, my parents, myself or the Young Marines.” Opponents of such legislation pooh-poohed any need for special protection. "I think that Landrieu's Freedom to Pray bill is unnecessary, in that voluntary prayer is always allowed," said Marjorie Esman, executive director of the American Civil Liberties Union's Louisiana office. Meanwhile, a Pentagon faith policy adviser says the problem is that sharing the Gospel is an act of treason. Mikey Weinstein, founder and president of the anti-Christian Military Religious Freedom Foundation, calls evangelicals "fundamentalist Christian monsters."

One of Weinstein’s board members, Larry Wilkerson, compares sharing the Gospel to an act of rape. "Sexual assault and proselytizing are absolutely destructive ... This is a national security threat," Wilkerson says. "What is happening is spiritual rape. And what the Pentagon needs to understand is that it is sedition and treason. It should be punished.”

The Obama Administration called in their group to help the Pentagon produce a document that instructs military leaders “at all levels" that they "must avoid the actual or apparent use of their position to promote their personal religious beliefs to their subordinates or to extend preferential treatment for any religion." Noncompliance, even by chaplains, could result in a court-martial.

“If the rights of our military heroes are stripped away, how long will it be until all of us will be forced to keep silent about our faith in the public square?” asks Tony Perkins of the Family Research Council. “The aggressive anti-Christian actions of the Obama administration are real, documented and escalating.”

Perkins cited a list of recent events that he says highlight the Obama Administration’s growing hostility towards Christians in the military, saying, “We must stop anti-Christian actions like these: January 2010 – Department of Defense orders removal of tiny Bible references on military scopes and gunsights. June 2011 – The Department of Veterans Affairs forbids references to God and Jesus during burials at National Cemetery. August 2011 – The Air Force stops teaching the Just War theory because it is based on a philosophy of St. Augustine.”

Perkins’ list continues: February 2012 – The U.S. Military Academy at West Point disinvites retired three-star Army general and decorated war hero William "Jerry" Boykin, because he is an outspoken Christian . February 2012 – The Army orders Catholic chaplains not to read archbishop's letter to soldiers . May 2012 – The Obama Administration opposes legislation to protect the rights of conscience for military chaplains who do not wish to perform same-sex marriages.

June 2012 – Obama administration revokes the long- standing U.S. policy of allowing military service emblems to be placed on military Bibles . January 2013 – Obama announces the opposition to a provision in the 2013 National Defense Authorization Act protecting the rights of conscience for military chaplains.

April 2013 – In U.S. Army Reserve training about Equal Opportunity laws, "Evangelical Christianity" and "Catholicism" along with the terrorist organizations Al-Qaeda, Muslim Brotherhood, and Hamas as examples of "religious extremism," according to a complaint by the Archdiocese for the Military Services and the Chaplain Alliance for Religious Liberty, reported the Christian Post. “Listed alongside 'extremist' groups and organizations like the Klu Klux Klan, the U.S. Army slideshow has 'Evangelical Christianity' as the first bullet, followed by the Muslim Brotherhood, Ultra-Orthodox Judaism and farther down on the slide, Catholicism.”

According to the training documents, "Extremism is a complex phenomenon" that is present in every religion due to "some followers that believe that their beliefs, customs and traditions are the only 'right way' and that all others are practicing their faith the 'wrong way,' seeing and believing that their faith/religion superior to all others. ”

"Men and women of faith who have served the Army faithfully for centuries shouldn't be likened to those who have regularly threatened the peace and security of the United States," says retired Col. Ron Crews, executive director of the Chaplain Alliance for Religious Liberty. He says he was alerted to the training material by a concerned soldier .

"The archdiocese is astounded that Catholics were listed alongside groups that are, by their very mission and nature, violent and extremist," the Archdiocese for the Military Services said in a statement, as reported by World Magazine. Roman Catholics make up 20 percent of active-duty members of the military, while other faith groups and denominations, such as Muslims, Buddhists and Southern Baptists, are less than 2 percent of the U.S. military.

What happens if Christians in uniform publicly express their deeply held convictions? Air National Guardsman Layne Wilson was informed he was being kicked out and his sick wife’s medical care would be cut off after he wrote a private letter to his superiors expressing his opposition to same-sex weddings in the West Point chapel. Wilson's superiors responded by rescinding his six-year contract with the Guard, then eliminated health coverage for his wife – who is suffering from stage four breast cancer. When his superiors’ actions were publicized, the measures were reversed, but a letter of reprimand remains in Wilson’s file, effectively ending any chances of future promotion and destroying his military career.

After publicly backing down, Layne's superiors continued apparent efforts to drive the 27-year veteran out of the service. Wilson’s commanding officers informed him they're opening a "security information file" based on his private Facebook postings and are "reviewing his security clearance." His attorney, John Wells, expected as much. "Once the military puts a target on your back, they continue to push until they win or are told by a higher authority to stop," he writes. "It appears to be an attempt to force everyone to conform with the politically correct left-wing military the President is striving to create. Security clearances are a favorite target when trying to destroy a subordinate's career. ”

“It's time for every liberty-loving American to demand an end to this Administration's war on religious liberty,” says retired three-star Army general William "Jerry" Boykin. “Call your Congressman and both Senators today and demand that they hold the military leadership and the civilian political leadership accountable for this pattern of persecution. We cannot and must not tolerate these attacks on our First Freedom.”

General Boykin cites a recent meeting of anti-Christian activists with senior Air Force officials “to discuss pressing issues in the U.S. Air Force. What issues would be of such importance to gain such a high-level hearing ? According to these anti-Christian activists, religion is one of the chief problems plaguing our troops. As Sally Quin in the Washington Post reported, some are saying that ‘religious proselytizing’ is at the top of the list of problems in the armed forces – even on par with sexual assault .”

“Coercion has always been forbidden by military policy, and troops are free to have a faith or no faith,” writes General Boykin. “However, this policy is being used to suppress religious expression. For example, an Air Force officer was reportedly ordered to remove a Bible from his desk.” Coast Guard Rear Admiral William Lee recently cited the hostile environment for Christians as he recounted “his decision to violate the rules preventing him from giving a Bible to a service member who had attempted suicide,” reported Boykin. To a standing ovation, Admiral Lee promised not to back down from "my right under the Constitution to tell a young man that there is hope.”

“Still,” says General Boykin, “secularists are not satisfied, and are now demanding a court martial for those who don't comply with their view of religious speech. Full acceptance of their definition will lead to silencing all people of faith. Our brave troops deserve better.”

But atheists aren't just looking for a platform in the military – they're looking for a pulpit. Two Democrat Congressmen have been working to establish a chapter of atheist military chaplains. Rob Andrews (D-N.J.) and Jared Polis (D-Colo.) introduced measures to create "non-theist" chaplains.

Congressman John Fleming (R- Louisiana), is “flabbergasted that Congress is wasting its time on this,” he told Fox News, "When it comes to the idea of an atheist chaplain, which is an oxymoron – it's self-contradictory – what you're really doing is now saying that we're going to replace true chaplains with non-chaplain chaplains. It's just total nonsense, the idea of having a chaplain who is an atheist."

"Today is the 237th anniversary of General George Washington's general order establishing the Chaplaincy," Congressman Jim Bridenstine (R-Oklahoma) recently told a crowd. "In that general order, he stated, 'The General hopes and trusts, that every officer and man, will endeavor so to live, and act as becomes a Christian Soldier defending the dearest Rights and Liberties of his country.'"

“We are suggesting," declared Congressman Bridenstine, that Obama "allow Christian soldiers to have the right to live and act like Christians ... or whatever faith. ”