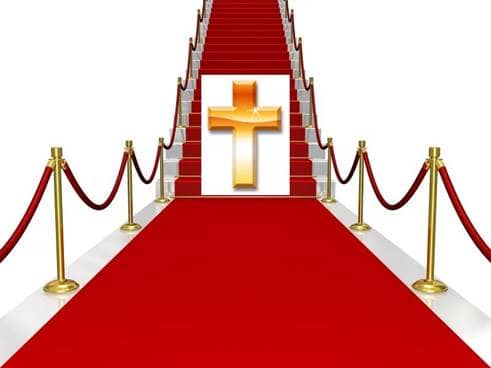 Mel Gibson’s “The Passion of the Christ” broke down a barrier that existed in Hollywood for a long time that existed between Christianity and the limelight of the red carpet. Questions were raised. Did the secular movie marketplace soften to stories of faith? Are audiences more open to plots and people with religious dimensions? Would Jesus approve and pose for the paparazzi?

Many films have chosen to express faith more openly and to add religious references. The major motion picture Les Miserables won the Golden Globe for Best Picture, Anne Hathaway and Hugh Jackman also took shiny awards home for their spectacular performances proving that adding Jesus, salvation, grace and prayer to dialogue and songs can be beneficial and entertaining.

Recently, television producer Mark Burnett and his wife Roma Downey took on the challenge of retelling the story of The Bible. "God calls people with the right skill sets at the right time," said Burnett. They have developed a 10 hour mini-series entitled The Bible that will air on the History Channel. "We really felt the call to do this," said Downey. The couple worked on the project for three years and believed that it was their duty to retell the story of The Bible.

Hollywood showcases movies that are based on love, drama, horror, comedy and just about any other genre you can think of – so why not Christianity? Truth is if enough people are willing to pay money to watch Christian films on the screen, then production companies will continue to make the films.

The oddity is that Christianity and other religions have existed for as long as any of us can remember yet just like sex, another taboo subject, people continue to stray away from the controversial because they do not know the reaction that will be evoked from society. Christianity is relatable to many people yet it can also cause uproar because it is not the only religious denomination. However, everyone can relate to religion in some state or form. Ironically, even the non-believers have their set of beliefs.

Christianity in general resonates with so many people therefore consumers will continue to line up at the box office and purchase the DVDs because they enjoy the portrayal and fancy the opportunity for stories to be brought to life.

Hollywood isn’t slowing down either; there are several blockbuster films in development. Russell Crowe will star in the movie “Noah”, Steven Spielberg is scheduled to direct “Gods and Kings” centered on Moses and Will Smith will make his directing debut depicting the story of Cain and Abel in the movie “The Redemption of Cain.” As more and more Christian films succeed, there will only be more willing production companies and celebrities signing up for the parts. We as a population want everything to be reenacted and we yearn to relate to current and historical events; ultimately we all want relevance. This is proven with movies that depict love, war, humor and now religion because all of those subjects are relatable to real life. Even though we live our lives first hand we ache for life to be conceptualized and that’s what the cinema does.