The Feast Means Less Without The Fast

Consider that music is only music if it has silences and rests; otherwise, it’s just an endless string of sensation without meaning. Similarly, the deepest blessedness of food and drink reveals itself to us by its sanctified absence. 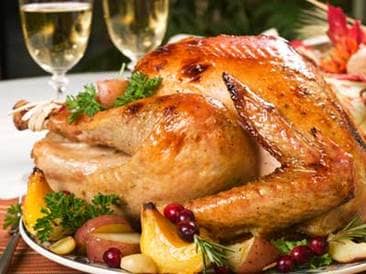 Maybe I’m not supposed to say this as a Christian, but Thanksgiving, the great American secular feast, is my favorite holiday. It’s all about the food, and all about the family. It’s hard to say precisely where my deep delight in food and feasting came from, but a good argument can be made that it all started in early childhood, when my family would go over the bayou and up the hill to my grandmother’s house on Thanksgiving day.

No incensed-filled Gothic cathedral could match in exaltation the aroma inside Nana’s house on those days. The smell of golden turkey roasting, pie crust toasting, a blanket of brown sugar caramelizing over the tender flesh of sweet potatoes, all of it presided over by my stout Nana, the family matriarch. My sister and I would watch the tail end of the Macy’s Thanksgiving Day parade on Nana’s old black and white Zenith while waiting for dinner to be served. The Macy’s procession was a kind of tantalizing liturgical drama that came before the feast; to this day, I can’t glance at the parade on TV without my mouth watering.

I cherish those memories, but now, deep into middle age and struggling with my weight, as I have for nearly all my life, I wonder if perhaps I didn’t love Nana’s table too much. Nana was overweight too. She denied delicious treats neither to herself nor her grandchildren, even though she suffered from diabetes and eventually died of a heart attack. A child of the deep South, I grew up in a food-is-love culture, raised by parents who had suffered deprivation during the Great Depression and its aftermath, and who were determined never, or at least rarely, to say no to anything we kids asked for at the table.

Americans have a hard time saying no to anything. Looking at the obesity statistics – heck, looking at shoppers in the mall – it’s clear that we have a problem with gluttony. It’s crazy-making to dwell in this advertising-driven popular culture, which berates us with the message that we should deny ourselves nothing, yet teaches us to despise our overstuffed flesh. Every time I go to the supermarket, I feel like St. Paul when he wrote to the Romans, “I do not understand what I do. For what I want to do I do not do, but what I hate to do.” (Rom. 7:15, NIV)

I have been an Orthodox Christian for seven years, which is weird enough in American culture. Perhaps the weirdest, most countercultural part of living out Orthodoxy is the faith’s insistence on fasting. Orthodox Christians fast from meat and dairy most days of the year, including nearly every Wednesday and Friday, as the early Church did. It’s hard to do, not only because we’re used to eating what we want, when we want it, but also because to be a 21st-century American is to deny oneself nothing.

Orthodox Christianity teaches its adherents that if we don’t master our passions, they will master us. This is what fasting is for: teaching ourselves that, as Christ told the Tempter, “Man does not live by bread alone, but by every word that proceeds from the mouth of God.” That is, our spiritual needs must take precedence over our physical desires.

Fasting is not a punishment, but rather medicine to help our souls get in harmony with God. Dante offers a striking image of the redemptive power of fasting in his Purgatorio, part two of The Divine Comedy. The poet stands on the mountain, his feet on the terrace where penitents are purged of the sin of Gluttony before they proceed into the full glory of God. Dante sees a group of apparently starving sinners, joyfully singing Psalm 51, which begins, “Open my lips, O Lord, and my mouth shall proclaim your praise.”

Notice that the mouths that were once used to overindulge their appetites now sing praises to the Almighty. One of the shades – that is, the soul of the dead penitent – tells Dante that their thirst and hunger is a “solace,” because it allows them to unite themselves to the suffering of the Saviour, in whose eternal company they shall soon reside.

This is a hard truth to grasp, especially for modern Americans, who associate plenty with blessedness. But for prosperity to be rightly ordered under God, we must subject it to the discipline of fasting. When Jesus said it is hard for the rich man to enter the kingdom of heaven, he wasn’t merely talking about the wealthy, but all those who put their passions above holiness.

That would be, well, people like me. I exult in the Thanksgiving feast, giving gratitude to God for all his blessings. But the next day, we Orthodox Christians return to the annual Nativity fast, which we observe until the Christmas feast – this, to prepare our souls for the birth of Jesus, the Bread of Life who fed, and who feeds, a spiritually starving world.

It is difficult, to put it mildly, to endure the great American banquet – the cakes, the pies, the egg nog, and other holiday goodies – in the month from Thanksgiving to Christmas. But if you’re like me, it’s necessary to do so. Consider that music is only music if it has silences and rests; otherwise, it’s just an endless string of sensation without meaning. Similarly, the deepest blessedness of food and drink reveals itself to us by its sanctified absence.