The 25 Messages From God That Will Change Your Life

Walsch provides readers with the information needed to live their life to the fullest by the way of God. 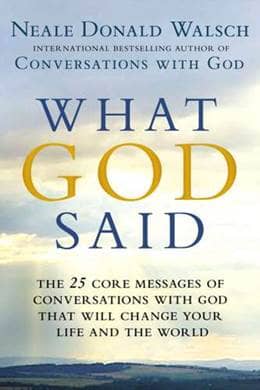 Here, in one thousand words, is all that the human race needs to know in order to live the life for which it has yearned and which, despite trying for thousands of years, it has yet to produce. Carry these messages to your world:

2. There’s enough. It is not necessary to compete for, much less fight over, your resources. All you have to do is share.

5. There are Three Basic Principles of Life: Functionality, Adaptability, and Sustainability.

6. There is no such thing as Right and Wrong, there is only What Works and What Does Not Work, given what it is you are trying to do.

7. In the spiritual sense, there are no victims and no villains in the world, although in the human sense it appears that there surely are. Yet because you are Divine, everything that happens ultimately benefits you.

8. No one does anything inappropriate, given their model of the world.

9. There is no such place as hell, and eternal damnation does not exist.

10. Death does not exist. What you call “death” is merely a process of Re-Identification.

11. There is no such thing as Space and Time, there is only Here and Now.

13. You are the creator of your own reality, using the Three Tools of Creation: Thought, Word, and Action.

14. Your life has nothing to do with you. It is about everyone whose life you touch and how you touch it.

15. The purpose of your life is to re-create yourself anew in the next grandest version of the greatest vision ever you held about Who You Are.

16. The moment you declare anything, everything unlike it will come into the space. This is the Law of Opposites, producing a contextual field within which that which you wish to express may be experienced.

18. The human race lives within a precise set of illusions. The Ten Illusions of Humans are Need Exists, Failure Exists, Disunity Exists, Insufficiency Exists, Requirement Exists, Judgment Exists, Condemnation Exists, Conditionality Exists, Superiority Exists, and Ignorance Exists. These illusions are meant to serve humanity, but it must learn how to use them.

19. The Three Core Concepts of Holistic Living are Honesty, Awareness, and Responsibility. Live according to these precepts and self-anger will disappear from your life.

20. Life functions within a Be-Do-Have paradigm. Most people have this backward, imagining that first one must “have” things in order to “do” things, thus to “be” what they wish to be. Reversing this process is the fastest way to experience mastery in living.

21. There are Three Levels of Awareness: Hope, Faith, and Knowing. Spiritual mastery is about living from the third level.

• Permit yourself to acknowledge that some of your old beliefs about God and about Life are no longer working.

• Explore the possibility that there is something you do not fully understand about God and about Life, the understanding of which would change everything.

• Announce that you are willing for new understandings of God and Life to now be brought forth, understandings that could produce a new way of life on this planet.

• Courageously examine these new understandings and, if they align with your personal inner truth and knowing, enlarge your belief system to include them.

• Express your life as a demonstration of your highest beliefs, rather than as a denial of them.

25. Let there be a New Gospel for all the people of Earth: “We are all one. Ours is not a better way, ours is merely another way.”

The one thousand words here, embraced and acted on, could change your world in a single generation.