Gorbachev was the most powerful political figure in the USSR—yet he was not free to express his innermost beliefs. I think Dad's own Christian faith enabled him to sense the spiritual core in other people—even in those who kept their spirituality hidden behind a façade of atheism. 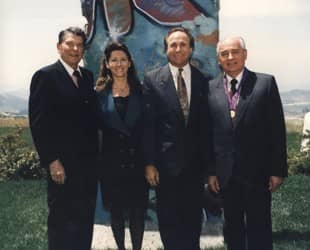 I first met Mikhail Gorbachev in May 1992 at the Reagan ranch. The Soviet Union had collapsed five months earlier, and he was no longer in power. He had come to the Reagan Ranch as a private citizen—and as my father's friend. Together, these two men had transformed the world.

When Gorbachev arrived at the ranch, Dad gave him a cowboy hat so he would look like the part of a ranch hand. Unfortunately, Gorbachev put the hat on backwards, and that's how he wore it throughout his visit. No one had the heart to tell the former president of the Soviet Union, "Um, Mr. President, you've got your hat on backwards."

The next time I saw Mikhail Gorbachev was in 2005, a year after my father passed away. I took part in a series of town hall meetings with the former Soviet leader. These "Mikhail-and-Michael" events took place in several California cities, and I was privileged to get to know Gorbachev better as we shared memories of my father, both on stage and off.

Dad had long suspected Gorbachev of being a "closet Christian." I was intrigued by the possibility that the former Soviet leader might secretly be a man of faith. So, during our town hall encounters, I questioned Gorbachev about his views on God.

He told me that his late wife's grandparents were killed during the Stalinist purges for having religious icons in their home. He also recalled that his own grandparents kept Christian icons hidden behind pictures of Lenin and Stalin.

Because of Soviet hostility to religion, Mikhail Gorbachev professed to be an atheist in order to rise in the Communist Party. I wondered what kind of tension this created inside Gorbachev—a man raised with a Christian heritage, yet determined to be a good Communist.

At several town hall events, I asked, "Mr. Gorbachev, when my father would meet with you, he would always pray to God for guidance. Who did you look to for guidance during those meetings?"

On one occasion, I said, "Sometime, you've got to explain to me what a 'not-a-diehard-atheist' is."

During a town hall event in San Francisco, I said, "Mr. Gorbachev, you remember that at every summit with my father, you'd close the meeting with the words, 'If it's God's will.' Do you think the events that took place as a result of those summits were God's will?"

"Michael," he replied, "When I met with your father, I would look around the room—and I never saw God in the room." He was about to go on, but the audience—which was apparently dominated by agnostics and atheists—broke into cheers and a standing ovation. The applause just went on and on, to a point where Gorbachev seemed embarrassed.

Unfortunately, the applause prevented him from finishing what he'd started to say. I'm sure he didn't mean to leave the impression that, because he couldn't see God, then God must not exist—that would be a foolish premise. It seemed to bother him that he didn't get to finish his answer.

At our next town hall meeting, I asked him the question I had asked three times before, "Who do you look to for guidance?"

This time, he gave me a different answer than before. "Michael," he said, "my grandmother was a Christian woman. She would go to church every day. Then, after church, she would come visit me and say, 'Mikhail, I went to church today and I prayed for the atheist. I prayed for you.'"

Now, isn't that interesting? Mikhail Gorbachev didn't say, as he had said before, "I'm not a diehard atheist, but I am an atheist." Nor did he say, "I'm a believer." Instead, he told a story about his Christian grandmother. That was his response to the question, "Who do you look to for guidance?" It was an oblique answer—but I think it was the answer.

In March 2008, the London Telegraph reported a story  that got surprisingly little coverage at the time. The headline read: "Mikhail Gorbachev Admits He Is a Christian." The story describes Gorbachev's surprise visit to the tomb of St. Francis of Assisi in Rome. Gorbachev told reporters that the story of St. Francis had played a pivotal role in his life. "It was through St. Francis that I arrived at the Church," he said, "so it was important that I came to visit his tomb."

My own suspicions—and my father's—were confirmed. Mikhail Gorbachev is indeed a man of faith.

Isn't that amazing? Gorbachev was the most powerful political figure in the USSR—yet he was not free to express his innermost beliefs. I think Dad's own Christian faith enabled him to sense the spiritual core in other people—even in those who kept their spirituality hidden behind a façade of atheism.

Dad was raised in the Christian faith by his mother, Nelle. "She planted that faith very deeply in me," he later recalled. "I had a personal experience when I invited Christ into my life." On July 21, 1922, 11-year-old Ronald Reagan was baptized, along with his older brother Neil. Dad recalled that when he came up out of the water, he felt called by God.

He remained steadfast in his faith as he went into radio broadcasting and later in the motion picture business. Soon after he moved to California in the 1930s, he joined the Hollywood Beverly Christian Church. Our family attended that church, and my mother, Jane Wyman, even taught Sunday school there. Dad continued sending donations to that church long after he quit attending. Last I heard, Nancy was still sending monthly donations to Beverly Christian in honor of my dad.

My father strongly believed in prayer. After my mother told him she wanted a divorce, he would tell every Christian he knew, "Please pray for my marriage." He once said, "There hasn't been a serious crisis in my life when I haven't prayed, and when prayer hasn't helped me."

After the divorce, I didn't get to see my father as much as I liked. But every other weekend, he would pick up my sister Maureen and me and take us to his ranch. We used to go on hikes, and Dad would point out the wildflowers, the oak trees, and the wildlife. He told us, "See how everything in nature is so beautiful and well-designed? The flowers, the trees, and the animals all reveal God's handiwork."

In the 1960s, when Dad was governor of California, he was diagnosed with an ulcer. For more than a year, he watched his diet, consumed vast quantities of Maalox and prayed daily for healing—but the pain in his stomach only got worse. One morning, he got up and went to the medicine cabinet to begin his daily Maalox regimen. Then a thought occurred to him out of the blue: "You don't need this stuff anymore." He decided to forego the Maalox that day.

He went to his Sacramento office and launched into his workday. By mid-morning, he realized that the pain in his stomach was gone. He had a meeting with a businessman from Southern California. At the end of their meeting, the man shook Dad's hand and said, "Governor, I want you to know that I'm part of a group of people who pray every day for you."

Later that same day, Dad met with another businessman. Once again, this man told my father that he and his friends prayed daily for him.

A few days later, when Dad went for his regular checkup, the doctor was surprised to find that Dad's ulcer was gone. He was healed. Dad knew it was the power of prayer.

On the day of his inauguration as the 40th president of the United States, my father placed his left hand upon the well-worn Bible of his late mother, then he raised his right hand and took the oath of office. Dad's hand rested on the words God spoke to King Solomon in 2 Chronicles 7:14: "If My people who are called by My name will humble themselves, and pray and seek My face, and turn from their wicked ways, then I will hear from heaven, and will forgive their sin and heal their land."

In the margin next to that verse, his mother Nelle had written, "A most wonderful verse for the healing of the nations." During the next eight years, our nation did undergo a miraculous healing. I believe the economic healing of America and the collapse of Soviet communism took place because the nation was led by a man of deep faith and daily prayer.

Just two months and 10 days into Ronald Reagan's first term, a gunman shot and wounded my father and three other men. The bullet came within a quarter inch of my father's heart.

When I visited him at George Washington University Medical Center immediately after the assassination attempt, Dad said: "Michael, I've thought a lot about how close I came to losing my life. Not only would my earthly life have been over, but everything I wanted to do for the American people would have ended right then and there. I believe God spared me for a purpose. Michael, I want you to know that I've decided to commit the rest of my life, and the rest of my presidency, to God."

Ronald Reagan and Mikhail Gorbachev were two strikingly dissimilar men. At first glance, they seemed to have nothing in common. Yet together, they turned their initial distrust into a friendship that changed the world. At each of their summit meetings, my father would open with a prayer for guidance, and Gorbachev would close with the words, "If it's God's will."

These two men of faith believed in a God who has a plan and purpose for the human race. And God's plan was for Ronald Reagan and Mikhail Gorbachev to work together to end the Cold War. Though they never discussed religion, both men sensed in each other the one thing they held in common: ann abiding relationship—indeed, a friendship—with the Creator of the Universe.