Despite how central this prayer is to the worship of Christians around the world, there are still mysteries and surprises associated with the famous prayer.

Also called the Ave Maria or Angelic Salutation, the Hail Mary prayer is one of the most well-known and most-used prayers in the Christian faith. The popular prayer addresses the Virgin Mary, mother of Jesus Christ and rejoices in the grace which raises her above all other women. It describes her role in the birth of Christ and entreats her to pray for us both in the present moment and when we are dying.

The Hail Mary prayer in its current form is used by many different Christian denominations, but it is most often associated with Roman Catholicism. This is with good reason as the veneration of Mary is an important part of Catholic doctrine. It is also a central part of the Orthodox Church.

Orthodox Christians mention Mary’s name frequently in hymns and prayers and, like Catholics, request her intercession at important moments in their lives. The Hail Mary prayer is one common way of doing so.

Despite how central this prayer is to the worship and liturgies of the nearly 1.6 billion Catholics and Orthodox Christians in the world, there are still mysteries and surprises associated with the famous prayer. Here are six facts about the Hail Mary prayer that are often unknown.

The first Hail Mary prayer recorded consisted only of the words of Gabriel and Elizabeth as written in Luke 1. The original prayer then likely read, “Hail, full of grace, the Lord is with you. Blessed are you among women and blessed is the fruit of your womb.” Some, however, think that the phrase “full of grace” would not have been included, others argue it would still have begun “Hail Mary.” Unfortunately, the very first rendition of the prayer is lost. The early recorded variants we do have may or may not be perfect transcriptions of the original, but there is no way to know for certain.

Evolution of the Prayer

Evolution of the Prayer

The earliest form of the Hail Mary prayer, created purely from the verses in Luke 1, was first recorded as being used by Pope Gregory the Great. Pope Gregory the Great was head of the Catholic Church from 509–604 AD. He ordered that the short prayer be recited as the Offertory of the Mass during the fourth Sunday in Advent.

Under Pope Urban IV, the name of Jesus was added to the prayer. Mary’s name had been added to the prayer sometime previously leaving Urban IV’s version of the prayer as “Hail Mary, full of grace, the Lord is with you. Blessed are you among women and blessed is the fruit of your womb, Jesus”.

The final additions to the prayer were made during the early portion of the fourteenth century. In 1508, “Holy Mary, pray for us sinners” was added with “now and at the hour of our death” being used by some traditions but not others. It was not until 1515 that the prayer as it is known today came into widespread use in Western Europe, though some scholars argue that it was used prior to that date.

Backbone of the Rosary

Backbone of the Rosary

Despite being the main prayer said on the rosary today, the rosary may predate the Hail Mary prayer. Many scholars believe that the rosary began simply as a way for monks to keep track of the prayers they were saying. Literate monks would often read or recite all 150 Psalms daily, but illiterate monks had no way to keep track of the number of prayers they were saying. There are stories of monks picking up 100 pebbles and using them to count 100 prayers, but this was not always practical. Strings of beads had long been a popular way of counting prayers, both inside and outside of Christianity. Simple strings of prayer beads were both easy to make and light enough for traveling monks to carry with them. Over time, an increasing number of monasteries adopted the practice and monks used the beads of the rosary to count prayers or Psalms. Eventually, the rosary evolved from a simple counting mechanism to a specific method of prayer, with a set order and number of prayers to be recited.

Many Christians, however, reject this more secular theory and hold to the story that the rosary was a gift from Mary herself. The story goes that it was a gift to St. Dominic along with instructions how to pray the newly created rosary.

The Hail Mary prayer has evolved several times over the course of history, but there are still variations of the prayer today. While the Roman Catholic version of the prayer is the best known in Western Europe and the United States, the Orthodox Church and Eastern Christians tend to use different versions of the prayer.

One commonly used version is “Mother of God and Virgin, rejoice! Mary, full of Grace, the Lord is with thee, blessed art thou amongst women, and blessed is the fruit of thy womb; for thou hast borne the Savior of our souls.”

The Byzantine Book of Prayer has a slightly different version: “Hail, Mother of God, Virgin Mary, full of grace, the Lord is with you. Blessed are you among women, and blessed is the fruit of your womb; for you gave birth to Christ, the Savior and Redeemer of our souls.”

There are a few other slight variations on each of these versions as well, however, the intent of the prayer is the same. Some of the variation to the prayer could be from the use of different translators as no version of the Hail Mary prayer began in English.

The Roman Catholic version of the prayer started out in Latin, hence its other name, Ave Maria. The Orthodox versions, meanwhile, would have been translated from Greek or one of the Cyrillic languages. As such, the slight differences within each version may be due to the interpretation that is inherent in all translation work.

The question before the council was whether Mary should be called Christotokos, Christ-bearer, or Theotokos, God-bearer. While the difference may seem like splitting hairs today, it was a source of strife in the church. This was in part because the decision on whether Mary was regarded as Christ-bearer or God-bearer would determine whether Christian doctrine recognized a distinction between Christ’s human and divine natures or held that they were the same. The outcome ruled in favor of Christ being both fully divine and fully human making Mary Theotokos a title she is still granted when the Hail Mary prayer is recited in some Greek traditions.

As well as being based on Luke 1, parts of the Hail Mary prayer appear in the apocryphal book the Gospel of Pseudo-Matthew. Also called the Infancy Gospel of Matthew, this book details the conception, birth and early life of Jesus.

While the broad strokes of the story are the same as the other gospels, the Infancy Gospel of Matthew differs on some of the details. It also elaborates on events that are mentioned only briefly in the Bible, if at all. One of these events is how Mary came to be with Joseph. In the Infancy Gospel of Matthew, Mary is one of several virgins leaving the Temple and joining Joseph’s house based on a sign given in the Temple. While she is in Joseph’s house, the angel appears to her, as in the canonical gospels.

The angel’s name is not given in the Infancy Gospel of Matthew, but the angel does utter words very similar to those found in Luke that make up the first part of the Hail Mary prayer. The angel in the Infancy Gospel of Matthew says the words Luke attributes to Elizabeth as well as those said by Gabriel, with the unnamed angel saying “Hail, Mary, full of grace; the Lord is with you: blessed are you among women, and blessed is the fruit of your womb.”

The Hail Mary prayer has a long history and is used by millions of people every day. What begun as two verses from the canonical Scriptures or one line in the Apocrypha, has formed one of the most well-known prayers in the world. It is deeply significant to more than a billion people, even if the long history behind the various wordings of the prayer has been forgotten. Its final form may vary, but the Hail Mary prayer carries with it centuries of work, debate and reverence, regardless of the exact phrasing used. 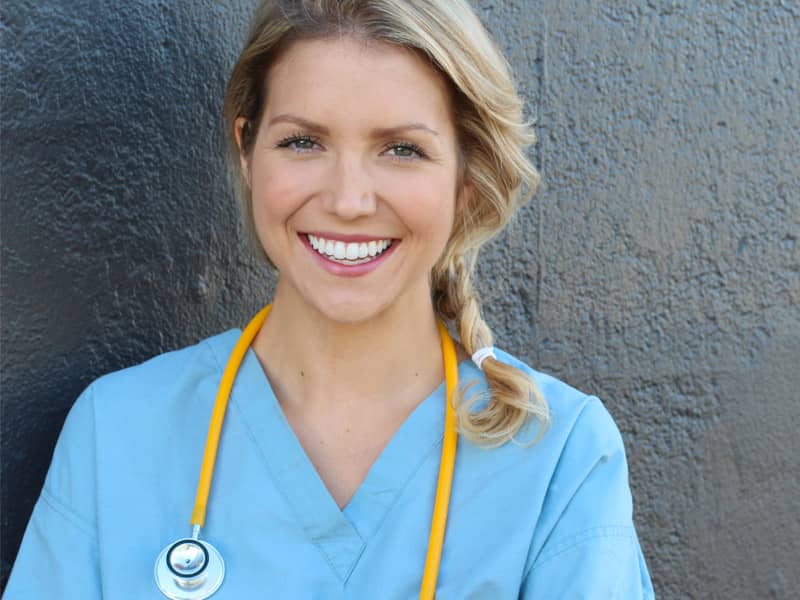 5 Prayers in Honor of Nurses
It is important that we pray for those working on the frontlines daily. Read next feature >
Stephanie Hertzenberg is a graduate of the College of William and Mary where she received her degree in Religious Studies and Creative Writing. She currently works as a freelance writer from her home in Virginia’s Shenandoah Valley