Whatever your need in life is, there is a patron saint who is standing by to help you. Click through our gallery and discover the stories of the saints. 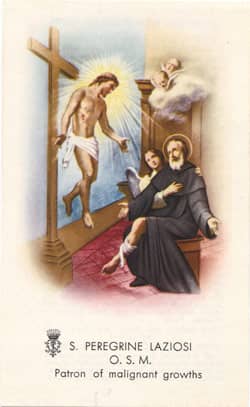 Whatever your need in life is, there is a patron saint who is standing by to help you. By Thomas J. CraughwellFor centuries, the saints of the Roman Catholic Church have served as both inspirations and intercessors. From the lives they lived to their deaths--many as martyrs--they serve as an example of what a devout and holy life can be. They embody the virtues that most of us only strive for on our best days.Many people also look to saints as intercessors who can understand our earthly struggles and will join us in prayers to God for assistance. While there are saints associated with all sorts of situations and conditions (there's even a saint for the Internet) the seven saints featured here are associated with illness and chronic health conditions.

Click through our gallery of seven patron saints for healing and comfort. 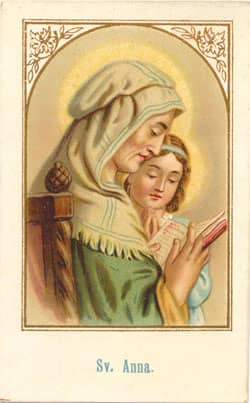 The Patron Saint of Infertility According to a second-century apocryphal work called The Protoevangelium of James, Anne lived with her husband Joachim for many years without bearing a child. But at long last God sent an angel to announce to Anne that she would become pregnant and give birth to a daughter. The angel also promised Anne that her child would be spoken of around the world. "Now I know the Lord God has blessed me exceedingly," Anne said to Joachim. "I, the childless, shall conceive." Anne and Joachim's daughter was, of course, the Blessed Virgin Mary.Since St. Anne is the mother of Mary and the grandmother of Jesus, Christians have always believed that her prayers must have great influence in heaven. Devotion to St. Anne is especially strong among women who long for children but have a hard time becoming pregnant. 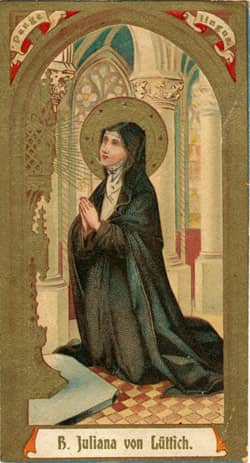 The Patron Saint of Chronic Illness Juliana Falconieri grew up among saints. Her uncle, St. Alexis Falconieri, was one of the seven founders of the Servite order. The priest who taught her as a child and acted as her spiritual director was St. Philip Benizi, one of the early superiors of the Servites. Inspired by the holiness around her, Juliana decided to affiliate herself with the Servites as a nun. Juliana added works of charity to the Servite way of life by going out into the streets of Florence to help the sick, the helpless, and the abandoned.Because of her own struggle with sickness, St. Juliana became the patron of people suffering from any type of chronic illness. During the last years of her life, she was plagued by an undiagnosed stomach ailment. Eventually the illness proved fatal. As she lay dying, she was seized by such a severe bout of vomiting that the attendant priest deemed her unable to receive Holy Communion. Instead, at Juliana's request, he covered her chest with a corporal (a linen cloth) and laid the consecrated host over her heart. According to the story, the Eucharist vanished a few moments later. 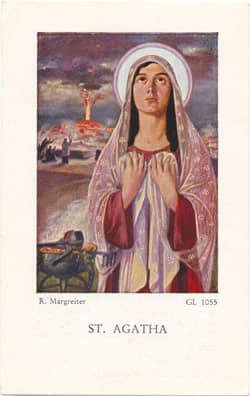 The Patron Saint of Breast Ailments Many a history textbook describes the ancient Romans as noble, enlightened, and civilized--even though their judicial system perpetrated some of the most gruesome crimes imaginable. The Romans believed that criminals (a category that included Christians) were less than human, so brutalizing them was perfectly acceptable.By these standards, the agonies experienced by St. Agatha were just business as usual. Her troubles began with a consul named Quintianus. As the man who governed Sicily, Quintianus could have whatever he wanted--and he wanted Agatha. But she was a wealthy Christian who had consecrated her virginity to God, and she turned him down flat. Enraged by the rejection, Quintianus ordered Agatha to be arrested and stretched on the rack. Despite excruciating pain, she refused to renounce her faith or accept him as a lover. He then instructed the executioners to slice off her breasts.Agatha was unconscious as the jailers carried her to a prison cell and left her to die. Then St. Peter arrived, descending from heaven, and restored her breasts. When the jailers reported that Agatha was alive and healthy, Quintianus had her rolled over hot coals until she died.Because of the mutilation endured during her martyrdom, she has always been the patron of women suffering from any type of breast ailment. In recent years, she has been invoked especially against breast cancer.
From This Saint's for You!: 300 Heavenly Allies for Architects, Athletes, Brides, Bachelors, Babies, Librarians, Murders, Whales, Widows, and You © 2007 by Thomas J. Craughwell. Reprinted with permission from Quirk Books

The Patron Saint of Cancer Peregrine Laziosi's conversion came about in the middle of a street brawl. He was one of the young hotheads of Forli, an Italian town that had sided with the holy Roman emperor in his power struggle with the Pope. The priest St. Philip Benizi was dispatched to urge the Forlians to come back to the Church. Peregrine Laziosi charged across the piazza, grabbed the front of St. Philip's religious habit, and struck him hard across the face. In response Philip turned the other cheek, waiting for another blow. Faced with such perfect Christ-like meekness, Peregrine's rage turned to shame. He joined St. Philip's religious order and became a Servite priest. For many years Peregrine suffered from an acute pain in his right leg. It was eventually found to be cancer. In a last-ditch effort to save the priest's life, the physician planned to amputate. The night before surgery, the suffering Peregrine dragged himself to the life-size crucifix that hung in the monastery. He sat at the foot of the cross and prayed until he fell asleep, dreaming of Christ climbing down from the cross and touching his cancerous limb. When he awoke, the wound on his knee had healed and not a trace of the cancer remained.
From This Saint's for You!: 300 Heavenly Allies for Architects, Athletes, Brides, Bachelors, Babies, Librarians, Murders, Whales, Widows, and You © 2007 by Thomas J. Craughwell. Reprinted with permission from Quirk Books 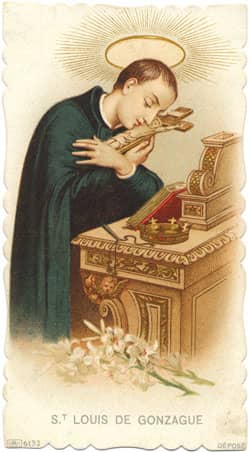 The Patron Saint of AIDS Patients and Caregivers As the eldest son and heir of a wealthy family in 16th century Spain, Aloysius was expected to marry well, raise a family, expand the Gonzagas' wealth and influence, and, if the opportunity arose, slaughter their enemies. Yet secretly he was planning to renounce his title and become a Jesuit priest. At age fifteen, he revealed his intentions to his parents. He gave up his inheritance and set off to become a Jesuit novitiate in Rome.Aloysius was aggressive and unyielding, with a pronounced antagonistic streak. He brought the same ferocious energy to religious life that his ancestors had carried onto the battlefield.Suspecting that the young nobleman needed to learn the virtues of obedience and humility, the Jesuit superior sent Aloysius to work in one of the city's hospitals. Aloysius did as he was told, but he loathed every minute of it. It took all his Gonzaga willpower to get through each day.Aloysius had a change of heart, however. In January 1591 a terrible epidemic struck Rome. Soon the city's hospitals were overwhelmed with patients, so convents and monasteries threw open their doors. Aloysius went out every day to collect the sick and dying. He found beds for them, washed them, fed them, comforted them, and prayed with them. Sadly, his heroic service lasted only a few weeks; he himself fell victim to the epidemic and died.In recent years, AIDS patients and their caregivers have adopted as their patron St. Aloysius Gonzaga, the man who overcame his fear of the sick and the dying and became their most kindhearted nurse.
From This Saint's for You!: 300 Heavenly Allies for Architects, Athletes, Brides, Bachelors, Babies, Librarians, Murders, Whales, Widows, and You © 2007 by Thomas J. Craughwell. Reprinted with permission from Quirk Books 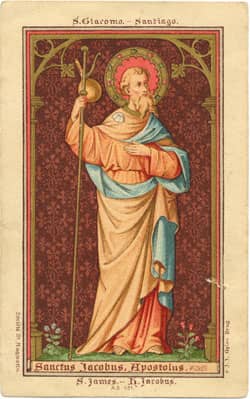 The Patron Saint of Arthritis and Rheumatism One of the first apostles to join Jesus, St. James was also the first such follower to be martyred. Of the twelve apostles, St. James, his brother St. John the Evangelist, and St. Peter formed a privileged inner circle. Christ allowed them to witness miracles the other apostles only heard about later: the raising from the dead of Jairus's young daughter, the healing of St. Peter's mother-in-law, and Christ's display of his heavenly glory at the Transfiguration. While the other apostles carried the gospel to far-off lands, James stuck close to home, preaching in Judea and Samaria. Consequently, when King Herod Agrippa began to round up Christians, James was easy to find. He was arrested, given a quick trial, and beheaded.Legend tells us that as the king's men led James outside Jerusalem for execution, he passed a man crippled by arthritis or rheumatism who was sitting by the side of the road. The man begged James to cure him. Pausing for a moment on his way to martyrdom, James said, "In the name of Jesus Christ, for whom I am being led to execution, stand up and bless your Creator." As the soldiers dragged James away, the crippled man stood and then ran to the temple in the city to give thanks to God. That's the type of cure people who suffer arthritis pain pray for. 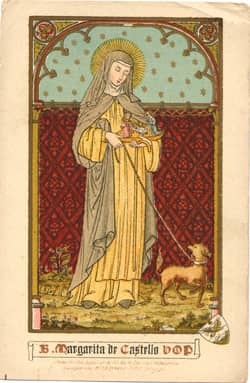 The Patron Saint of Disabilities Blessed Margaret's life is one of the most heart-wrenching stories in the roster of saints. She was born blind and with severe curvature of the spine; her right leg was an inch and a half shorter than her left, and her left arm was malformed. She never grew taller than four feet.Her parents kept little Margaret hidden away in their house in Metola, in the Italian province of Umbria. When Margaret was six years old, the family traveled to a shrine at Castello, hoping for a miracle. When none took place, her mother and father abandoned her.Some women of Castello found the terrified child and took care of her. A husband and wife, Venfarino and Grigia, adopted Margaret and treated her with love and kindness as their own daughter. She appears to have spent the rest of her life with them.Margaret's disabilities did not make her bitter; rather, she became one of the most generous, sympathetic people in Castello. She nursed the sick, consoled the dying, and visited prisoners. She regarded her own disabilities as a means to unite her pain with the suffering Christ endured on the cross. Her courage, patience, and deep religious devotion won her the affection of everyone in town.At Margaret's funeral, the crowd was immense. The parish priest planned to bury Margaret in the churchyard, but the mourners insisted that she have a tomb inside the church, alongside the other distinguished dead of Castello. The priest was still arguing the point when a girl whose legs were crippled dragged herself to Margaret's coffin. She touched the casket and then stood up and began to walk. The priest gave Margaret a tomb inside the church. 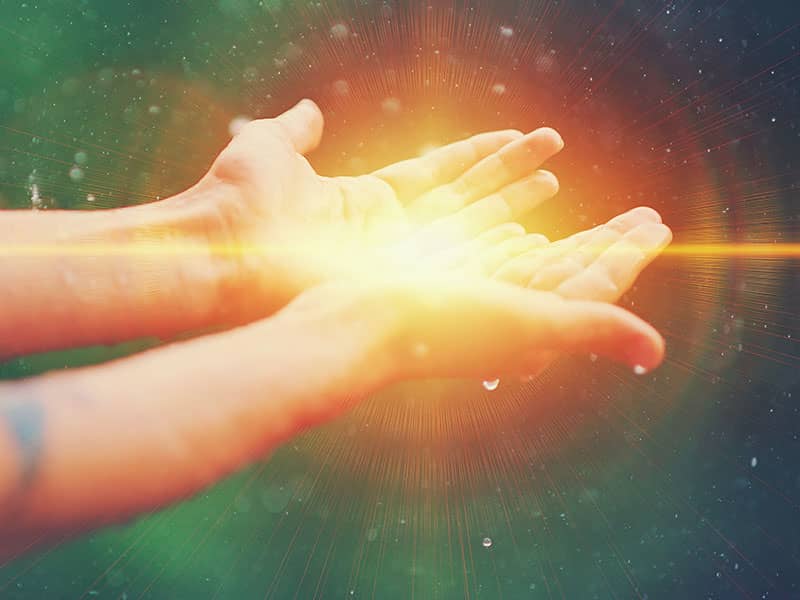 5 Prayers For God to Direct Our Next Steps

Trust in the path God is leading you on. Read next feature >
From This Saint's for You!: 300 Heavenly Allies for Architects, Athletes, Brides, Bachelors, Babies, Librarians, Murders, Whales, Widows, and You © 2007 by Thomas J. Craughwell. Reprinted with permission from Quirk Books