Did you know these common traditions have pagan origin? 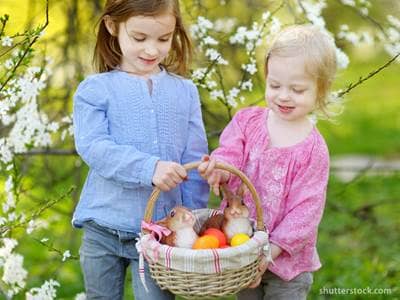 Today, Easter is a celebration of the death and resurrection of Jesus Christ by Christians. Alongside, Easter being a celebration of the resurrection, secular culture celebrates the spring equinox around this time. Though Easter is celebrated and embraced by religious culture today, the celebration has Pagan roots. In the early days of Christianity, there was a major, and violent conflict between worshippers of Jesus and Pagans who argued over whose God was true. Christians and Pagans ultimately came to an agreement, and accommodated the Spring festival. The date is not fixed, given Easter correlates with the date for Passover which is governed by the phases of the moon. The correlation with the phases of the moon too is connected with Paganism. When it comes to the more secular side of Easter, many Easter-related symbols have Pagan origin. Easter cards, gifts and products are connected with ancient Pagan symbolism. Bunnies are from the Pagan festival of Eostre, a great northern goddess whose symbol was a rabbit or hare. The exchange of eggs is also a part of ancient custom.

Mardi Gras, which also refers to Fat Tuesday, begins on Epiphany, a Christian holiday celebrated to remember the miracles that manifest the divinity of Christ. This celebration originated in the Eastern Church in AD 361, beginning as a way to commemorate the birth of Christ. Later, things were added to the celebration’s meaning, like the visit of the three magi. Many theorize that Mardi Gras’ origins lie in the ancient Pagan celebrations of spring and fertility, such as Lupercalia and Saturnalia. Lupercalia was a holiday that came in Spring that was symbolic of the fertility that Spring brought forth. Saturnalia was the winter celebration of the god Saturn. It lasted seven days and was the favorite of the Roman people. On the day of the festival, there was a sacrifice that took place at the Temple of Saturn which was followed by a large, public banquet. Given Saturnalia was marked by gift giving in a similar manner to Christmas; some sources also believe that Saturnalia was absorbed into the Christian holiday of Christmas.

While Valentine’s Day is a celebration of love and romance today, the origins of the festival are connected with Pagan festivals: Lupercalia and the feast day of Juno Februata. Celebrated on February 15, Lupercalia was held by the ancient Romans in honor of Lepercus, the god of fertility and husbandry, who was believed to protect herds, and crops, alongside being a mighty hunter – particularly of wolves. The Romans believed that Lupercus could protect them from the roving bands of wolves, which devoured livestock and people. Given this, male priests conducted purification rites by sacrificing goats and a dog in the Lupercal cave on Palestine Hill. February, to the Romans was also sacred to Juno Februata, the goddess of love, women and marriage. On February 14, small pieces of paper called billets were placed into a container with the names of teenage girls, and teenage boys would then choose the names at random. They would then become a couple, and join in erotic games at parties and feasts celebrated throughout Rome. They would also remain sexual partners throughout the year. This custom continued through the Roman Empire for centuries.

While research on the exact origin of birthdays and birthday cakes remains inconclusive, there is evidence that ties birthdays to Paganism. The giving of birthday gifts is a custom associated with the offering of sacrifices to Pagan gods on their birthdays. The traditional birthday cake also has its origin in ancient idol worship. They believed that the fire of candles had magical proprieties. They lifted up prayers and wishes to be carried to the gods on the flames of the candles. It was also believed based on a certain school of thought that the position of the stars at the time of birth influenced a child’s future. This is when astrological horoscopes came into play, which was believed to tell the future based on a person’s birth. Without the calendars and the stars and overall astrology, no one would have been able to celebrate birthdays. Historians have also determined that early Christians initially considered birthdays to be a Pagan ritual. This is because early birthdays were tied to “Pagan gods” and the Christian Church considered birthday celebrations evil for the first few hundred years of existence. However, this shifted around the 4th century. Around this time, Christians began to celebrate the birthday of Jesus as the Christmas holiday. In addition, there is no hint in the Bible or the early writings of Jesus, or the apostles that they ever celebrated birthdays. There are some Christian denominations like the Jehovah’s Witnesses who don’t celebrate birthdays in an attempt to avoid Paganism. However, birthdays are not condemned in Scripture as being sinful. There is no direct evidence that birthdays should not be celebrated by Christians.

Halloween originated in Paganism, and is related to Pagan belief. Encyclopedia Britannica says: Halloween had its origins in the festival of Samhain among the Celts of ancient Britain and Ireland. On the day corresponding to November 1 on contemporary calendars, the new year was believed to begin. That date was considered the beginning of the winter period, the date on which the herds were returned from pasture and land tenures were renewed. During the Samhain festival the souls of those who had died were believed to return to visit their homes, and those who had died during the year were believed to journey to the otherworld. People set bonfires on hilltops for relighting their hearth fires for the winter and to frighten away evil spirits, and they sometimes wore masks and other disguises to avoid being recognized by the ghosts thought to be present. It was in those ways that beings such as witches, hobgoblins, fairies, and demons came to be associated with the day. The period was also thought to be favourable for divination on matters such as marriage, health, and death. When the Romans conquered the Celts in the 1st century CE, they added their own festivals of Feralia, commemorating the passing of the dead, and of Pomona, the goddess of the harvest.

The symbols connected with Halloween, along with its customs and practices had influence on Western culture, but this wasn’t always the case. It wasn’t until the early 20th century that Halloween was widely observed, given America’s strong Christian heritage.

Learn more about Paganism and its different variations here.