Who is Bernie Sanders?

Who is the man from Vermont that has become a cultural phenomenon? Sen. (I-Vt.) Bernie Sanders stroked a fire with the millennial generation to become the first Jewish candidate to run in a presidential election. 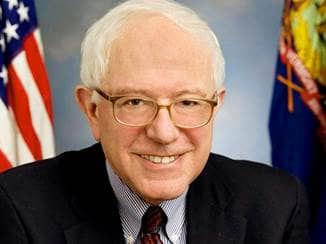 Who is the man from Vermont that has become a cultural phenomenon? Sen. (I-Vt.) Bernie Sanders stroked a fire with the millennial generation to become the first Jewish candidate to run in a presidential election. One of his talking points has been fighting corruption and greed on Wall Street and in Washington.

“Do the elected officials in Washington stand with ordinary Americans - working families, children, the elderly, the poor - or will the extraordinary power of billionaire campaign contributors and Big Money prevail? The American people, by the millions, must send Congress the answer to that question. Let us wage a moral and political war against the billionaires and corporate leaders, on Wall Street and elsewhere, whose policies and greed are destroying the middle class of America.”

There is more to the first liberal socialist running against Hillary for the 2016 Democratic nomination. It would be the first time someone Jewish would be nominated  by a major party if he does win. He’s proud to be Jewish, and is too familiar of what happens when radical political regimes take over, he os trying to stop the cycle.

He explained during a CNN democratic debate: “Look, my father's family was wiped out by Hitler in the Holocaust. I know about what crazy and radical and extremist politics mean,” said Sanders who worked on a kibbutz in Israel.

“I learned that lesson as a tiny, tiny child when my mother would take me shopping and we would see people working in stores who had numbers on their arms because they were in Hitler's concentration camp. I am very proud of being Jewish and that's an essential part of who I am as a human being.” Sanders are not for any organized religion, however. He believes we are all connected.

When Sander entered the contest in 2015, the 74-year-old was quickly dismissed by mainline democrats, and party elites. While this thought process was not quickly challenged, voters said otherwise by propelling him to chop a double-digit deficiently and take Clinton in New Hampshire to win the state’s primary. Still the underdog, Sander completed a victory in the Michigan primary after trailing Clinton significantly. He remains a strong foe for the dems.

As a college student Sanders worked as an activist to fight racial discrimination. He worked in the Civil Rights movement in the 1960s and joined the March on Washington led by Martine Luther King, Jr. When he was student at the University of Chicago he was arrested for protesting segregated schools and was considered by the police an agitator. He has been an advocate to equal rights for 50 years. After a move to Vermont, Sanders worked for years in the state and gained a reputation as a socialist that eventually would lead him to Washington in 1990.