The Spiritual Meaning of Israel

Israel’s spiritual meaning is as a place of revelation, letting us journey to the true north of our internal compass. 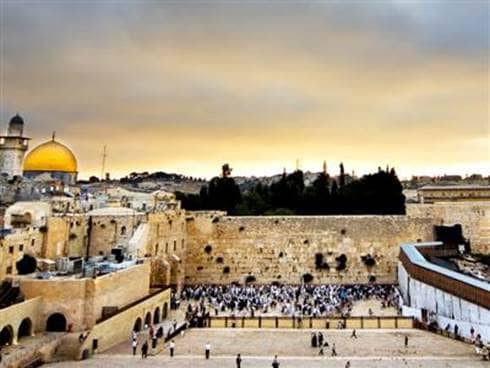 My wife and I visited Israel for the first time about forty years ago. Before the trip, I had read a lot about the land’s history. I re-read portions of the Bible. I read the story of Israel’s birth and spectacular growth.

I was interested in more than history, though. I had a small, private project beyond this exciting first venture to a crucial spot in the world’s consciousness. I wanted to see if I, an American Jew, felt some spiritual connection to the land.

I stood still for a minute when I walked on the runway. There are many stories of Jewish immigrants to the United States falling on the ground in tears and kissing the earth, grateful to be away from the persecution in the Old Country and have a chance for a new life in the Golden Land of America. But I wasn’t making aliyah—moving to Israel—so I didn’t feel I had the right to embrace the land so fully yet. I wanted to take some tentative steps.

My wife is a good explorer. She spoke excellent Hebrew. That made the trip easier. We were standard tourists on that trip. We stayed on a kibbutz where the guards looked really young to me. But that’s Israel, a country youthful in fact and in spirit. We went shopping. I went for a camel ride for the first (and I promise you the last) time.

In all this we had a wonderful time. I enjoyed every bit of it. But it was similar to visiting any new land in many ways. I had enjoyed our trips to England, France, and Holland, among other places. I like learning about new cultures, having new experiences. Yes, there was an extra layer of meaning, but I was surprised that it wasn’t yet deeper. I felt close to the Israelis. They were supposed to be impolite, but I found them fascinating.

Still, I was disappointed. Where was my spiritual experience? What special meaning did Israel have for Americans?

Then we visited the Western Wall. The Wall was part of a retaining wall for the Second Temple destroyed in the year 70 of the Common Era. This was the place Jews traditionally came to pray until prevented by the Arabs. After the Six-Day War in 1967, the Israelis re-took that part of Jerusalem that included the Temple Mount with what was then called the Wailing Wall because Jews came there to cry for the loss of their nation.

The Western Wall is divided into a portion for men, which is on the left as you face the Wall, and a portion where women prayed. I felt uncomfortable about this
separation, but I planned to stand far to the right on my side and my wife would stand far to the left on her side so we would be near each other.

I had no particular attachment to the Wall. I expected it to be one more site on a tour of fascinating sites. Someone had told me of a custom to write a prayer on a piece of paper and place the paper in the Wall. The most common prayer is one for peace. I wrote the word “Shalom” which has many meanings, including a wish for peace, on a paper and planned just to put it in the Wall and say a brief prayer.

The day was bright. It was mid-afternoon. Many other people were there.

I approached the Wall and put the paper in one of the many crevices.

And then, spontaneously, I lifted my hands and placed my palms against the Wall. I’m not sure if I saw someone else do that, or it just seemed like a natural movement.

That’s when it happened. As soon as my hands were on the Wall I felt what I can only describe as a feeling that some electric current went through me. The feeling wasn’t painful. It was a shock of awareness. An awakening of some part of me deep within.

There was a spiritual connection, a feeling of closeness to God and to the cosmos unlike the feeling that came from normal praying. I felt as though vertical time had disappeared, that I was in touch with my ancestors, with their suffering and their survival, with their fears and their dreams. As I stood there, I felt all of Jewish history flow through me.

That feeling stayed with me for the rest of the trip. I saw Israel, as if through new eyes. The whole land seemed bathed in spirituality. Every valley, every building, every cloud looked different, as though it existed as itself but with an extra dimension, one not available anywhere else on Earth.

That is when I finally understood the spiritual meaning of Israel. It wasn’t just the Promised Land. It was the land where transcendent experiences were the deepest, the most life-changing.

The spiritual meaning of Israel, at least for me, is that it is a portal to a space where even someone who doesn’t live there can have experiences not available elsewhere. It is a mystical place where we can be closer to our own personal meaning and have a deeper understanding of our own personal mission. If we are religious believers, of course, we feel as if we are, for a brief while, visitors in God’s home. If we are not religious we feel as though we have found a connection to the deepest part of our own selves.

Israel’s spiritual meaning is as a place of revelation, letting us journey to the true north of our internal compass.

I was reluctant to come home from that trip. But I returned with my wife and our four children so that one of our daughters could have our Bat Mitzvah there. And I continued to read about Israel, to support it economically and politically.

And, to this day, in my mind I feel echoes of that first visit to the Western Wall.