Ashland, Oregon is known for a unique blend of college students at Southern Oregon University and retired Baby Boomers. It is also the site of the annual Oregon Shakespeare Festival, and an enclave of transplanted liberals in an otherwise rooted, conservative region. 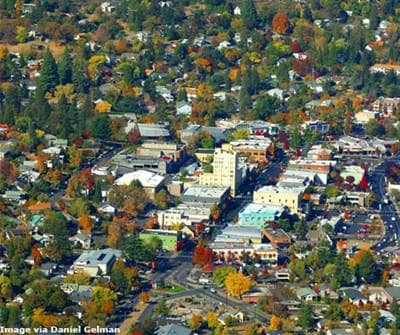 Ashland, Oregon is known for a unique blend of college students at Southern Oregon University and retired Baby Boomers. It is also the site of the annual Oregon Shakespeare Festival, and an enclave of transplanted liberals in an otherwise rooted, conservative region. It’s a place of great natural beauty near the California border, two hours inland from the ocean.

“Boomers” sell their homes in L.A. and the Bay Area and buy a nice spread in or near Ashland. There they can get in touch with nature and explore aspects of life that they had less time for back home. Secular Jews of that generation grew up with reverence for nature, a Progressive world view, alienation from Traditional Judaism, and an unquenchable thirst for spiritual meaning. Enter the intersection of Ashland with Jewish people in their sixties.

Many Jews seek acceptance in seemingly eclectic places where people are disconnected from established traditions and prone toward universalism or new modes of thought. College towns are a popular choice for Jews hoping to blend into the fabric of a diverse and thriving local culture.

One of the leading Progressive activists in Ashland is Jeff Golden, who is something of a pioneer to his generation of Southern Oregon transplants. He purchased an isolated plot of land north of town in the early 70’s as a young Jewish man from Beverly Hills, after attending Harvard. Now he lives closer to town.

Jeff’s adventures are chronicled in his book Watermelon Summer and the documentary River Dogs. But Golden grew up secular and has yet to investigate a potential route home to Judaism. He has instead devoted his life to his version of “social responsibility,” including producing a PBS series called Immense Possibilities.

When asked in a recent interview whether that passion may be related to his Jewish soul, he was intrigued. “I’m still asking myself what it means to be Jewish.” As a kid he was turned off by the darkness associated with the European Jewish memories of his extended family. But he has not ruled out the possibility of drawing closer to his roots. “I admire a lot of people in the Jewish tradition,” he concluded. “It’s a possibility.”

Other Jews formed or joined congregations after settling in town. Some had always maintained a connection to Judaism, and others felt the tug of the Yiddish “Pintele Yid,” (“Spark of a Jew”). Some also find ways to incorporate the values of their generation into their return to tradition.

Congregation Havurah Shir Hadash prides itself on nourishing that spark as they mention in part of their Mission Statement: “Encouraging new modes of expression, prayer and practice, the Havurah is dedicated to being a point of entry or re-entry for unaffiliated Jews who seek to infuse their lives with the ancient and evolving values and traditions.”

The group is led by Rabbi David Zaslow local poet, editor, and musician. He’s from New York City, but has been in Ashland since 1970. Zaslow is heavily involved in interfaith dialogue, wrote a book about Jesus, and made a presentation at World Peace and Prayer Day last year near Ashland.

Although this movement has a reputation for an experimental approach to spirituality, the congregation in Ashland affirms a pro-Israel stance on their web site, at a time when some of their peers have reservations on that topic.

Temple Emek Shalom partners with the local Unitarian Universalist Fellowship and the City of Ashland to sponsor a homeless shelter. They also provide winter clothing and baby goods via their Social Justice Action Committee. It’s part of Reform Judaism’s emphasis on the imperative to pursue “Tikkun Olam,” which is Hebrew for “Repairing the World.”

Jyl came from a secular Jewish background in the Bay Area. While living in L.A. she found Judaism through an outreach organization. When she and her husband were ready to retire, they saw a magazine article about the best locations to do so.

“Ashland is a place where people who have a very spiritual quest in life come,” she said in a recent interview. “There is a very open approach to spirituality. The synagogues are very alive. Over 200 people come out for the public menorah lightings during Chanukah.

A lot of us have grown weary of the notion that we have to live in a shtetl.” (Yiddish term for an exclusively Jewish settlement) Jyl affiliates with CHABAD. It’s an acronym for the three Hebrew words that translate as “Wisdom, Understanding, and Knowledge.”

Chabad Lubavitch is a Chasidic Jewish culture within the broader spectrum of Orthodox Judaism. There are countless Chasidic dynasties, usually named after the part of Europe where they originated. Lubavitch was in an area known as “White Russia” near Lithuania.

The original European “Chasidim” of the 18th century were considered controversial free spirits of their day. This was due to their emphasis on song, dance, storytelling, mysticism and ecstatic worship. But serious scholasticism remained part of the equation.

Chabad has made it their mission to open their doors to unaffiliated Jews while casting no judgment upon their past or current lifestyles. Starting in the 1970’s, they have encouraged Rabbis to set up communities in the far reaches of the secular Jewish world. They serve as “Lamplighters” of Jewish souls.

Rabbi Avi Zweigel and his family were living in Florida in 2003 when they learned about Ashland’s growing Jewish community. They soon made the move and established a congregation. Late last year, with the help of local fundraising, they purchased a building on the main street in town to be used as a synagogue and Jewish center. It had previously been occupied by a Starbucks. The Rabbi is known for his accessibility and attentiveness. He figures that the number of Jewish households in the area has grown to about 1800.

Richard had grown weary of urban life as a teacher in inner city L.A. Him and his wife moved to a conservative rural area in Idaho. But they missed having a Jewish community. Although they were far from “religious,” they had grown up in a liberal, Reform Jewish congregation and sorely missed the ethnic and spiritual connection.

When reflecting on his Idaho neighbors in an interview, Richard explained that they saw him as someone to convert, not someone to accept as he was. So he began traveling to the nearest Chabad center in Washington. Eventually he began staying over at the local Rabbi’s house on the Sabbath.

While passing through Ashland Richard was struck by the warmth of Rabbi Avi and the diversity and openness of the town. He never considered exploring other denominations of Judaism when the spark reignited in him. “I always believed in God. But I have a problem with Conservative or Reform Judaism. They make light of the miraculous and they don’t go into depth. I need to be with community. You need something to guide your life. There’s a love at Chabad.”

Richard is optimistic about the Jewish future of Ashland. “I think there’s a spiritual draw here. It’s a freedom and an acceptance. It’s kind of cozy. I think the Jewish community is going to grow,” he said.

Steven was completely alienated from Judaism. He lives just outside Ashland. But after years of declining invitations to a Passover gathering by Rabbi Avi, he finally accepted one. Although he still does not consider himself “religious,” he has been genuinely overwhelmed by the warmth of the Rabbi and the satisfaction of having a closer connection to Judaism.

In a recent testimonial he wrote,

“I began to feel like I was coming home. I was on my way back to a place I had always belonged, but never really understood. Suddenly it became clear that I am not a bad Jew. I have just been wayward in a world filled with mixed messages and cynicism over religion.

Maybe it’s the result of getting older and wanting to know more. For whatever reason, I am no longer a completely lost and confused wayward Jew. I am beginning to find my way back. Talk is cheap, but I have been listening to the Rabbi’s words and witnessing his actions. They are consistent. He is available, willing to make time and always wanting to include people in celebration and observance.”

Like many college towns, Ashland may not be as diverse and open-minded as generally perceived, depending on who is doing the perceiving. The world view at college campuses almost monolithically sways to the Left, as does the culture of the general population in college towns.

Judaism’s emphasis on personal discipline, delayed gratification, chastity, support for Israel, and family values may run counter to a modern, socially liberal agenda. Colleges often breed hostility to Israel and Shakespeare was instrumental in promoting a devastatingly negative image of a Jew in his play The Merchant of Venice. So there may be aspects of the local culture that conflict with a blossoming Jewish identity.

In Steven’s case a half hour’s distance from town suits him well. He expressed his aversion to the eccentric types he encounters in town. “I just like the mountains and scenic beauty. The culture is too much for me to handle for more than a few hours at a time.”

Daniel Gelman has been a news correspondent, feature and opinion writer for newspapers, web sites, and magazines for 20 years. His areas of concentration are local histories, religion and spirituality, and small business. He is based in Southern California.