"A Guide to the Complex" tackles the controversial topics in the Jewish community such as abortion and organ donation. An interview with the book's author gives insight into his newly published work. 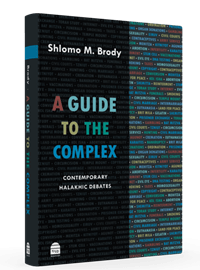 One of the most beautiful aspects about Jewish life is its diversity—the tapestry of colors that make up how Jews around the world practice Jewish tradition and its laws. Yet it is this very di-versity that is contentious, or oftentimes divisive and charged, especially when people begin to deliberate whose observance carries more halakhic (Jewish legal) legitimacy.

For columnist and educator Rabbi Shlomo Brody, appreciating “Shiv’im panim LaTorah”—which in a literal sense means the 70 faces of the Torah, but in a practice sense refers to the To-rah’s numerous possible interpretations—begins with giving popular access to the historical, legal, and theological sources that impact halakhic discourse. Brody’s debut book, which is based on his popular newspaper column, features 134 concise essays on today’s most provocative issues in Jewish law. These issues include abortion, paternity and DNA testing, downloading from the Internet, organ donation, the “protective power” of the red string, kol isha (female singing), female rabbinic ordination, fleeing Israel during wartime, fertility treatments, stem cell research, conversion standards, and more.

In the following interview, Brody provides a behind-the-scenes look at his newly published work, “A Guide to the Complex: Contemporary Halakhic Debates” (Maggid Books, 2014).

What was your goal in writing “A Guide to the Complex”?

“Many Jews want to be knowledgeable about the hot topics of debate within Jewish law, but fre-quently don’t have the time to properly research the nuances and complexities of the disputes. I wanted to create a book that was sufficiently in-depth to be informative even for rabbis, yet con-cise and accessible so that anyone could use it for passionate discussions around the Shabbat ta-ble or in college dorm rooms.”

You write that it is harmful to the community when people are passionate about halakhic controversies, but do not know the sources. Can you elaborate on why you believe this is dangerous?

“Jewish legal debates are full of nuances, and it’s nearly impossible to appreciate the complexity of the subject without some access to the sources. Moreover, when people can root their opinions within texts, they can create a shared language that allows for dialogue and respectful disagree-ment. Halakha has been the traditional language of the Jewish world for many centuries, and the ability to converse about halakhic matters facilitates greater understanding while forcing one to sharpen his/her own perspective. Conversely, a lack of knowledge can lead to the (frequently un-necessary) delegitimization of others, with people not even realizing that there’s another legiti-mate option out there. This is especially true if one includes (as one should) scholars from the full range of the halakhic community, without excluding anyone for his ideological stances on, say, Zionism or secular studies. Admittedly, not all opinions expressed in popular dialogue are well grounded in traditional sources. Yet one cannot coherently exclude a position if there is no shared language for the conversation.”

Where do the questions that are featured in “A Guide to the Complex” come from?

“Many of the questions were submitted by readers and staff of the Jerusalem Post, where I write the ‘Ask the Rabbi’ column. Other questions originated from conversations I had with students and friends, who wanted deeper knowledge of Jewish legal perspectives on current events.”

Which books are you currently reading? Don’t worry, the readers won’t judge you if you indulge in “Game of Thrones.” It’s okay. Really.

“I’m thinking a lot these days about what makes humans unique in light of the finding of con-temporary neuroscience and evolutionary biology. These questions have many legal implications in areas like criminal law and animal rights, and I think the Torah has a lot to say in response to these questions. Three helpful books that I’m reading include ‘The Gap’ by Thomas Suddendorf, ‘The Difference of Man and the Difference it Makes’ by Mortimer Adler, and ‘Who’s in Charge? Free Will and the Science of the Brain’ by Michael Gazzaniga.”

Aside from being a columnist and author, you’re an educator who works with teens during their “year in Israel.” What are the most spicy halakhic topics that have come up recently? How do you tackle these subjects with your students?

“Students are very interested in questions relating to gender, like women rabbis, or questions re-lating to religion and state, like the question of public transportation on Shabbat in Israel. But more than any specific issue, they want to discuss broader questions relating to rabbinic authority and the halakhic process. I try to discuss these issues in the same way I try to approach the ques-tions in my book: with honesty and clarity, giving them the full range of opinions. By the end of the process that also know how I feel on the matter, but I try not to let my own opinion cloud their understanding of the broader topic.”

“A Guide to the Complex” has been released from Maggid Books, a division of Koren Publishers Jerusalem. It is available online and at your local Jewish bookstore.

Yehudit Jessica Singer currently serves as the Director of PR and Marketing for Koren Publishers Jerusalem.