Even though they aren’t mentioned even once in the actual five books of the Torah, heaven and hell are fundamental ideas in Judaism. 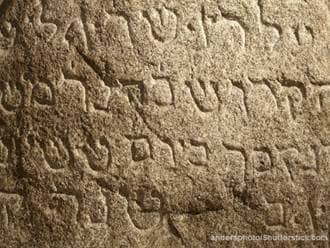 Even though they aren’t mentioned even once in the actual five books of the Torah, heaven and hell are fundamental ideas in Judaism. For example, the famous early medieval Jewish commentator Rabbi Moses ben Maimonides (aka, the Rambam) alluded to the concepts of heaven and hell when he wrote his 11th principle of faith, which states: I believe with complete faith that the Creator, blessed be His Name, rewards those who observe his commandments with good, and punishes those who violate his commandments. Clearly, the Rambam wasn’t stating that people who keep shabbat and kosher get showered with riches, good health and every other blessing in this world – because even a quick look around the religiously observant Jewish world shows that’s not happening for a lot of people. The reward and punishment being described by the Rambam takes place in the next world, once the eternal soul has already left its temporary body. But if you’re expecting little red guys with pitchforks to be doling out the punishment you’re going to be sadly disappointed, because Jewish hell differs from its more mainstream counterparts in a number of big ways, which we’ll take a look at now. Here are five things you never knew about Jewish hell.

1. It doesn’t last forever. This is probably going to come as a shock to a few readers, but most people won’t spend more than a maximum of 12 months in Jewish hell, or gehinnom, to give it its proper Hebrew name. That’s because gehinnom is more about cleaning souls up, then punishing them for eternity. God knows people goof up, do things wrong and succumb to temptation all the time, and He doesn’t expect perfection. God created gehinnom as a kind of spiritual launderette, to clean off all those stains and icky residues left on the soul when those inevitable spiritual mistakes get made. Some souls take longer than others to get whiter-than-white again, so they spend a bit longer in the bleach cycle; but as soon as the soul gets properly cleaned up, its stay in gehinnom is officially over.

2. It’s not an ‘either / or ‘ choice between heaven or hell, because most people end up going to BOTH. So, how does that work, exactly? It’s like this: nobody is always 100% perfect and never does anything wrong, and nobody is 100 percent evil either (although some people throughout history have come pretty darned close…) God has kindly arranged things so that you get fully rewarded for all the good stuff you do in heaven, for eternity. BUT before you can take your place, you first need to pay down the spiritual debt you accrued during your lifetime. The place you do that is gehinnom. The more ‘bad’ things that you did (that you didn’t already fix in your lifetime), the longer you spend there. But once you paid down your spiritual debt, the gates of heaven swing open, and you’re welcomed back upstairs. A few extremely pious individuals go to great lengths to fix any wrongdoing they might have done while they’re still alive. The people who manage this get to skip gehinnom and go straight to the VIP lounge Upstairs – but it’s a level that most of us just aren’t at.

3. It only cleans up sins between man and God. The pork chop you ate on Yom Kippur is a classic example of the sort of sin that can get cleaned off your slate in gehinnom. Ditto for driving to the beach on Shabbat, eating that toasted bagel on Pesach, or worshipping that cute pagan idol. But gehinnom doesn’t work for sins between man and man: if you hurt someone else in some way, lied to them, cheated them out of their pension or generally made their life miserable and you didn’t apologize to them and make amends for what you did during your lifetime, then you’re in trouble. Heaven won’t let you in to claim your eternal reward while you still have some outstanding spiritual debts to pay down, and Jewish hell doesn’t work for those sort of sins. So what’s the answer? In a nutshell: reincarnation. God sends you back down to planet earth for another go around, so you can fix what you broke the last time around.

4. There are worse places to be… Strange to say, getting into Jewish hell actually ranks as a sort of spiritual achievement, and not every soul manages it. In our holy books, stories abound of souls who received much worse punishments than spending a few months in gehinnom: some of them got cast into the kaf hakela, a type of spiritual sling-shot that pings the soul from one end of the universe and then back again, never giving it a moment to stay in the same place and catch its proverbial breath. Other souls are tricked into believing that they’re actually still alive and are then sent to what’s called the ‘World of Desolation’, where they can spend decades pointlessly going through the motions of ‘life’ before someone clues them in that they’re just wasting their time. And then, there’s a really terrible punishment where souls are sent to wander the earth as disembodied spirits, in the worse cases for centuries, until they pay down their massive spiritual debts and are given the ‘present’ of finally being allowed in to gehinnom.

5. Other people can get you out of it. There’s a famous story told about Rebbe Akiva, the famous mystic and defacto leader of the Jewish people who lived around 2,000 years ago, just after the destruction of the second temple. Rebbe Akiva once had a vision of a Jewish apostate and heretic, who was being tortured in a number of terrible ways for all the bad things he’d done in his life. Rebbe Akiva took pity on this soul, and decided to help him.

He found the dead man’s son, and enrolled him in cheder (Jewish school, where the child would be taught how to read the Torah and keep God’s commandments). A little while later, the dead soul visited Rebbe Akiva, and told him that the torture had really dropped off, and he was very grateful. But Rebbe Akiva wasn’t finished. Next, he took the boy, and sent him to yeshiva. The dead father returned again, to tell Rebbe Akiva that now he’d got out of gehinnom, as a result of his son’s good deeds. But there was still more to come. Finally, Rebbe Akiva arranged for the son to get a job as a Rebbe in his own right, teaching Torah to a group of small children. The dead man reappeared again a little while later, and was overjoyed: he told Rebbe Akiva that they’d let him in to heaven now, and he was being lauded and praised for having such a saintly, holy son! Every small good deed we do down here also has the power to ‘lift’ a soul higher up in the World of Truth. Every time you light a memorial candle, say another chapter of psalms, or donate another buck to charity on behalf of the deceased, you are doing amazing things for their soul. So the last thing to learn about Jewish hell is that even if you were literally the worst person in the world, there’s still always hope that things can improve, and that you won’t get stuck there forever.