This rabbi believes Hurricane Katrina's destruction was a human error and is doing his part to respond in kind. 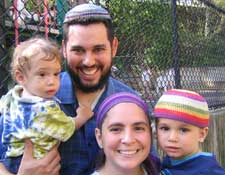 Civic duty is not something Rabbi Uri Topolosky takes lightly: he recently left his post as associate rabbi at the Hebrew Institute of Riverdale in New York to rebuild Jewish life in New Orleans. When the devastating hurricane hit two years ago this week, most synagogues were flooded, but Congregation Beth Israel in New Orleans was completely destroyed. After the devastation of the storm, Topolosky’s predecessor moved with his family to New Jersey, leaving Beth Israel in need of a new spiritual leader. The 29-year-old rabbi relocated with his wife, Dahlia, and sons Elyon, 3, and Itai, 1, to stimulate the New Orleans Jewish community’s rebirth and reinvention.

To mark Katrina's two-year anniversary, Beliefnet recently spoke with Rabbi Topolsky about the spiritual effects of the devastating storm and how communities of faith are coming together to rebuild what they once lost.

Why did you, a young rabbi with a job in New York, suddenly decide to move to New Orleans?

There are a lot of different components that really drew [my family] here. First of all, the opportunity to be a part of a small Jewish community where everything you do really can have a profound impact on the make-up of the Jewish community--what it looks like, how it feels--that was very exciting.

The other piece was we really did feel a sense of civic duty to come to New Orleans after Katrina. It was very powerful to come to a place that has experienced so much devastation, to a city where everyone is still living in the trauma of Katrina, and to just do our own small part in helping rebuild.

One of the unique things about coming to a place like New Orleans is that it's not just about building up your shul, your synagogue, your community. It's about helping to rebuild an entire city. That is so exciting. New Orleans is just an incredibly exciting place right now in America because there's so much attention on it and, frankly, a lot of it is negative. But, attention and energy is attention and energy, and it can be redirected and re-channeled for positive.

What do you see more of in the aftermath of Katrina: people asking, "How could a good God let this happen," or people saying, "This crisis brought me closer to God?"

What we see right now is a city that is still living in the trauma of the storm, but has moved away from existential issues, and has gone to looking at ourselves--people, the engineering corps, the government--and saying, "Where should we have been more responsible?" and "How can we be more responsible moving forward?"

I'm sure people went through [a period of asking] "How could God have done that," and I'm sure some people are still going through that. But, what we've experienced on the whole is that there's a piece of God inside all of us, and that means that we have the responsibility to take care of our communities. Hurricane Katrina did not destroy this city. It was the levees that did not hold. And some would argue that, well, maybe no levee can ever hold here, and that might be possible. But, this is a human disaster. This is a human issue. And I think people have gone through the stages to recognize it, that what happened here was a human disaster, a human error and, therefore, there is a human response. If it's a designed, divine disaster, we don't know what the response can be. But, this was really a human disaster, and that means we're in control of how we respond to it.

Have you seen any signs of spiritual recovery?

There's a lot of spiritual recovery going on in every synagogue, in every church, and wherever else you want to look. Our shul was the only Orthodox synagogue to be destroyed by Katrina. Many synagogues took in water, but we lost everything. And our building is still sitting there, sort of a relic, a shell of what was, and it's incredibly intense to walk through there.

The other side of the coin is that we have been gifted three Torah scrolls [from communities in California and New Jersey], and more to come.

Have you observed spiritual communities coming together as a result of Katrina?

The Jewish community itself is very forward-thinking and was really working together to figure out how best to rebound. There have been strategic planning committees and conversations, and people have been getting together. I really sense that the Jewish community is back on its feet and really thinking about who it is and who it wants to be. Here, it's about rediscovery. It's about, well, who are we? Who do we want to be now? Post-Katrina is a new reality. Who do we want to be now?

And it's not just my congregation. The [Jewish] day school, the JCC, the kosher restaurants… everybody is working together to rebuild and re-explore what we'll be in the next decade.

One of my favorite Rabbinic teachings is that when the Jewish people crossed the sea as they left Egypt, that the sea split, and it didn't split into just one path, but there is a midrash that suggests that it split "walls and walls and walls," that there were many paths, perhaps 12 paths. And that's a beautiful idea about people moving forward--each on their own path, heading to the same destination and making room for that in our community. But, there is another piece of that midrash, which I love, which is that it says that, within the walls, "there were windows and windows." And what's incredibly powerful there is that, even though we make room for other paths, opinions, and perspectives as we journey across together, we also remember that we need to be looking at each other, that we are one community. Though diverse we should see each other and watch each other.

This is about the larger world in New Orleans. In all of our communities we have our paths and our goals and our agendas and the priorities that are in front of us, and we're all doing the great dance. But, it's important to constantly be looking outside of our windows and seeing other communities, whether that's here in America or beyond or in other countries, and just recognizing what the needs are of other people and what our responsibilities are to our larger world and to the other peoples and perspectives and communities that are out there.

A synagogue is supposed to have windows, and I believe that's what it's for. When we pray we should look outside of ourselves, too. And that's what this community is all about right now.

How do you counsel people who come to you and say that they're still living in fear?

The key right now, especially for a newcomer to New Orleans, is just to listen, to hear peoples' stories, to offer people the space to feel welcome in your presence, and that you're a safe and welcoming person, and just to listen. It's very difficult for someone who's an outsider to come in and offer answers. What I can offer is support and love and care. I think as we come closer as a community, perhaps I will be able to offer some vision of strength and renewal. But right now, for me the key is really just to listen to people's stories, to people's pain, but also to the stories of rebuilding and the strength that it has taken the people that have returned to come back. It's very inspiring to me. I look out and I see a family that lost everything, and they're back building a new home.

How has Katrina and spending time in New Orleans affected your own faith?

That's a great question. I think what's affected me most is just being incredibly inspired by the Godly spirit inside people and the strength that people have to come back and rebuild. Seeing the spiritual power that drives people towards community and a desire to rebuild a congregation that was on the decline and is now destroyed, gives you a real sense of encouragement of the human spirit and what people are able to do.

What are the spiritual lessons that you think we can learn from Katrina?

And the truth is, the other spiritual piece here is that it has to play on the souls of people outside of New Orleans. We're hoping that people outside this town are also moved by the ability to come here, to bring new ideas and fresh spirit and fresh energy, and to feel that sense of responsibility. That's a spiritual response.