A New Welcome for Jewish Daughters

An interview with Debra Nussbaum Cohen.

Beliefnet
The Jewish ritual of a brit milah, the circumcision and naming ceremony that formally welcomes baby boys into the Jewish community, is familiar to many, Jews and non-Jews alike. Many Jewish families are now choosing to celebrate the births of new daughters with similar welcoming rituals.

These ceremonies, often referred to as simchat bat --joy of the daughter--have been held among American Jewish families for 25 to 30 years. But not until Debra Nussbaum Cohen's recent book, "Celebrating Your New Jewish Daughter" (Jewish Lights Publishing, 2001), a guide to welcoming new female babies into the family and the Jewish community, have the ceremonies been researched, documented, and compiled for new parents. Beliefnet's Rebecca Phillips talked with Nussbaum Cohen, a journalist and mother of three, about motherhood, Jewish women, and the burgeoning interest in and performance of this ritual.

Many people do a simple, traditional baby naming in a synagogue when they have a daughter, instead of a simchat bat ceremony. Why do you think this ceremony is not more widespread?
I guess it depends where you live and what circles you move in. It has increased in popularity dramatically in the last five years. When I had my son seven years ago and I was collecting these ceremonies, there was very little awareness of them. I think only the most deeply engaged Jews did them. Now it's almost become de rigueur in many circles. Where there are Jews who really are engaged with Jewish ritual and Jewish living, I think it's become almost as expected as a brit milah is for a boy. But in many places, it's not well-known.

It's also a challenge to stand up and lead a Jewish ritual. I think that's something that many Jews don't feel equipped to do. But I'm hoping that's what the book will do--really be a tool for people to use.

How did you come to write the book?
The whole idea for this book came out of my experience putting something together for my first daughter. I really struggled with it. I'm a fairly knowledgeable Jew, and I'm a good researcher because I'm a journalist, but I really did not know where to begin. People had been doing this for about a generation--about 25 or 30 years--and I had a file folder full of other peoples' ceremonies. I realized there had to be a better way. I figured if I was struggling, a lot of people must be struggling.

Do you see the creation of this ceremony as an example of Jewish feminism? Did you write the book because you're a Jewish feminist?
I wrote the book because I'm a Jewish woman. I am a feminist, but many women don't call themselves that. My husband and I knew that there was no way we were going to give our daughter less of a welcome and less of a significant Jewish ritual than we did our son. It just wouldn't have felt right. I think that says a lot about this time in Jewish history, too.

You mentioned the letters you received from people about their simchat bat ceremonies, and you mention in the book many ceremonies from other countries. How did you go about doing the research?
I have been to quite a few [simchat bat ceremonies], those of friends and in my community. I researched it by putting a query out. It spread all over the world, mostly electronically, and people sent them [the ceremonies] to me from everywhere. I researched traditional welcoming ceremonies through scholars' work. But there's actually not a lot written. It's an area of recent scholarship. But there have been welcoming ceremonies in different Jewish cultures for hundreds of years. It's not a new phenomenon. But it is a phenomenon that kind of got forgotten in America.

What did you do for your own daughter's welcoming ceremony?
When my second daughter, Elana, was born, I was a lot more knowledgeable about this, and the book was going to press as I brought her home. I had been so immersed in it for the last year and a half or so that I didn't even want to have one for her at first, but my husband talked some sense into me.

Elana's welcoming ceremony was based on the five senses that God gave us to appreciate the world. And through each of them, we talked about our hopes for her and our dreams for her, and her relationship as an individual to her family and her community. 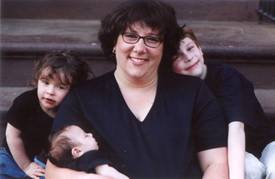 For sight, we held her up so the community, our 80 nearest and dearest in our living room, could see her. Then we lit a really pretty candle, a havdalah [ceremony that ends the Jewish sabbath] candle, and showed her the flame. For touch, we wrapped her in my talit [prayer shawl] and talked about wanting her to feel the embrace of her family and the Jewish people, and also her growing to become an adult, capable of embracing both a partner and her commitments as a Jew. For taste, we put some grape juice on her tongue, which is also done at a bris. For hearing, we sang a traditional Jewish song. And then we ended with the seven blessings, the sheva brachot, the traditional end to a Jewish wedding. And then of course the best part, we ate and had a fun party.

In the book there are many different examples of prayers and songs to choose from. Are there any absolute essentials that you feel should be included in a ceremony?
The bones of the structure are really important. It is a traditional liturgical structure. A Jewish welcome, a Jewish prayer of thanksgiving. A formal naming, with a naming blessing. And also a welcome into the Jewish people, and a welcome into a relationship with the creator. Some people feel more comfortable with the God part, and some people feel less comfortable, so it can be emphasized or de-emphasized or even adapted to secular humanist sensibilities.

Even though a daughter is new, she has a story, and simchat bat is a way to tell the story--talking about who she's named for and acknowledging how she arrived in your family, whatever route that took, by adoption, by birth.

Are there any specific prayers included in the book that you find particularly meaningful?
There's one called "Gomel," which is a prayer of thanksgiving after coming through a life-threatening experience. Having been through childbirth now three times, I never feel more vulnerable, physically and spiritually, than I do when I'm about to have a baby. It's like no other experience that I've ever had. A tremendous sense of awe and fear on a basic physical level, as well as a mental level, for the child and myself. Saying this brief blessing, which is traditionally said upon going back to synagogue for the first time after having a baby or after returning from overseas or after surgery, has been very meaningful for me.

Having a baby can be a time when many Jews who aren't affiliated return to Judaism. Did you have that in mind when writing this book?
Definitely. I wanted to appeal to people of every affiliation, or non-affiliation. This is definitely one of those moments when people who are not necessarily very engaged with Jewish life have a deep desire to reconnect, or connect for the first time. I really hoped to make the book very user-friendly and accessible. There are five sample ceremonies, which appeal to five different orientations toward Judaism. Having a welcoming ceremony for their daughter makes a statement to themselves and to their family and friends about their hopes and intentions for raising their daughter with some awareness of her Judaism.

You mentioned putting the grape juice on the baby's tongue--are there any other elements that are common between a simchat bat and a brit milah?
There's much that is parallel. The order of it is similar, and the naming blessing is much the same. And the party. Some people even hold their daughters' welcoming ceremonies on the eighth day.

Did you do that?
No, I don't feel that it's necessary. I feel that as males and females, we have different roles. They're coequal, but they are different. And while we have a commandment to transition boys into the covenant, I take the traditional view that girls are already born into the covenant, so they don't need a ritual transition into it. For me, the rituals are to acknowledge her being part of it, rather than to change her status, which is what a brit milah does.

Have certain parts of the book been especially important to your readers?
I know someone who is part of a lesbian couple who felt grateful that there's a short chapter addressing the needs of gay/lesbian families, because they are often not included. There's a longer chapter on adoption, which is such a reality in the Jewish community today, about acknowledging the culture of origin of the baby, which is sometimes not the culture of origin of the parents.

What has been the reaction in the Jewish community to the book so far?
The reaction has been, "Well, finally!" The time is really right. I think when my children have their daughters, every Jew will do this for their daughter.