Judah Smith is defying the stereotypes of ministry with his unconventional outreach methods. 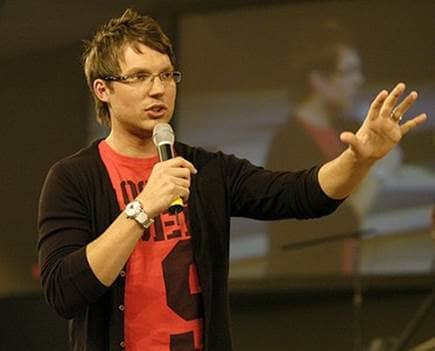 Judah Smith is not your average pastor. He is best friends with Masters champion Bubba Watson and skateboards with pop-star Justin Bieber. “…I want to push the envelope. I want to have genuine conversations with all people, listen to what others believe and have to say, respond to their questions, and take time to understand why they feel the way that they do,” Smith said. In his new book Jesus Is ___, Smith breaks down barriers between Jesus and the misconceptions that he’s represented by within society. Smith wants his readers to gain a deeper relationship and understanding of Jesus by realizing that Jesus is the point of all life.

What was your inspiration to write the book Jesus is ____ ?

It was a bit of a process, actually. It started with a desire to get our city, Seattle, thinking about Jesus. The Pacific Northwest is known for being indifferent or even antagonistic to religion, and I just wanted to start a conversation in people's minds. I talked with my team about launching some sort of marketing campaign, and we came up with the idea of Jesus Is ___. We put it up on billboards, buses, and bumper stickers, and I preached a sermon series based on it. Soon we realized it was much more than a slogan or tagline: it was our mission as a church. Our goal is  to show people who Jesus is. The book idea came later; it's a way for us to fill in the blank for people, based on the Bible.

Christianity is more about Jesus than about us. The point of Christianity is not our holiness or lack of holiness. The point is our relationship with God through Jesus. Sin is serious, don't get me wrong—but Jesus' grace is greater. We can get so distracted by our failures and so caught up in trying to win God's approval that we forget he saved us by grace and his grace continues to cover and empower us today. If we make Christianity about sin, we do a disservice to the grace and victory of Jesus. We are stooping to live by the law. The cross means that the guilt and penalty of sin have been dealt with, and we are free to enjoy God without fear or condemnation.

God loves everyone, no matter who they are, what they've done, or whether they love him back. His love is based on who he is, not on who we are. He desires that everyone would be saved. That is not to say, however, that everyone has the same type of relationship with God. Our relationship with Jesus determines our relationship with the Father. We are saved by grace through faith in Jesus. Clearly there are many people that do not acknowledge God's existence or their need for him. While that doesn't change God's love for them, it does keep them from having a meaningful relationship with him.

Your approach on religion is very modern, do you think that as a pastor people are more accepting of your modernity or do you think they’re resistant (at first) because of it?

Theologically, my views on grace, Jesus, salvation, the church, and other major doctrines are very classical; however, I am intentional about applying my messages to a modern audience, especially the Seattle culture. That would include our church decor, what I wear, the words and illustrations I use, and the way we conduct our services. We strive to be friendly, accepting, and authentic in everything we do as a church. We want everyone to feel welcome, especially first-time guests. That colors everything we do. Overall, people seem to be drawn to that and to appreciate it.

If you only had one word to fill in your blank Jesus is _____ what would it be and why?

I think the beauty of the blank is that there isn't just one answer. Everyone will fill it in differently. To me, the blank speaks of the sufficiency of Jesus. He is everything we could ever need. But his sufficiency isn't ethereal or abstract: it's intensely personal. Jesus is the answer to your specific need, right now, where you are at, no matter who you are or what you've done.

If I had to pick one word—for me—it would be grace. Jesus is grace. Jack Hayford defines grace as "God meeting man at his point of need in the person of Jesus Christ." That is such an amazing, beautiful truth, and I plan on spending the rest of my life exploring what grace means. Before I loved Jesus or even knew him, and despite the fact he knew every sin I would ever commit, Jesus loved me—that's the gospel. That's grace.

Judah Smith and his wife, Chelsea, are the lead pastors of The City Church in Seattle, Washington. They were youth ministry pastors for ten years-ranked as one of the top five “most dynamic” youth groups in the country by Ministry Today-before stepping into their new role in 2009. Outreach has recognized City Church as being one of the fastest growing churches in the country. It has four satellite locations orbiting the Seattle, WA metropolitan area. Judah is in high demand as a speaker, both in the U.S. and abroad, is the author of several books including Jesus Is ___, and is a popular voice on Twitter. Judah and Chelsea have three children: Zion, Elliott and Grace.