This young duo is building bridges between Islam and mainstream Australian society, all while staying blissfully married, raising two children and pursuing Ph.D.s. Get ready to feel under-accomplished. 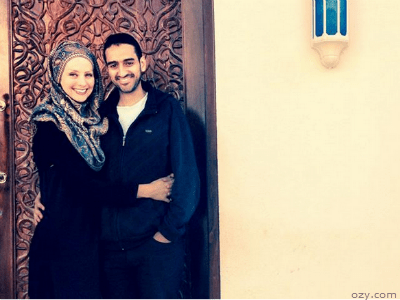 Susan Carland and Waleed Aly are exactly the type of people you’d want at your dinner party: intelligent, outspoken, engaging, charming, funny. Add Australian accents to that package and you’ve won me over in a second.

Independently of each other, married couple Carland and Aly often serve as the public faces of Islam in Australia. Aly, 35, is a broadcaster who hosts multiple shows on both radio and TV, covering news events ranging from politics to entertainment to sports. Carland, 34, is often called on by the media to write articles or give interviews discussing her academic work on the intersection of feminism and Islam. The duo’s friends jokingly refer to them as the “Muslim Brangelina,” and it’s easy to see why. They are young, good-looking, fashionably-dressed and charitable. Like Brangelina, except sans Hollywood and plus two upcoming Ph.Ds.

Similar to what happened in the United States after 9/11, Muslims in Australia were treated to intense scrutiny, suspicion and racism. “We went through a real period of feeling quite under attack,” says Carland. She felt an expectation that Muslims were supposed to start managing themselves to make sure a September 11 didn’t happen in Australia, too. A year after 9/11, the Bali bombings killed 88 Australians, followed by the 2004 Madrid bombings and the 2005 London bombings, all Islamist attacks.

”That whole era right through to about 2007 was just intense. It really was this feeling of constantly being surveilled by whoever was manning the moral barricades of society,” says Aly. But Muslims in Australia are coming out of that period now, both Carland and Aly say — and they’re becoming much more creative. “We have hit a point of real evolution,” says Aly. Artists, comedians, novelists, athletes and academics are all starting to flourish, particularly in the Melbourne Muslim community the couple calls home.

While Aly has reached a point in his career where he is a media host who just happens to be Muslim, Carland more often speaks publicly about Islam, often on editor Scott Stephens’ website, Religion and Ethics for ABC Online. Stephens explains that Aly expresses his spirituality “by bringing his faith invisibly to bear on politics, ethics and matters of public interest.” He says the couple embody the “two great traditions within Islam; the “hardnosed, intellectual, critical” side, as well as the “deeply prayerful and hospitable” side.

“He’s simply one of the sharpest minds in the public sphere,” says Stephens, noting Aly’s sharp political analysis and “forensic” interview style. “He is just uncommonly intelligent.” Stephens says Aly is “idolized” by young Muslim academics because “he gives them faith that it’s possible to be a Muslim in public without always being subject to suspicion.”

Still, they are both subjected to a particular brand of scrutiny in the public eye. Aly and Carland have been targets of backlash from within the Muslim community for not accurately representing the variety of experiences among Muslims in Australia. Aly actually stepped down from the Islamic Council of Victoria before his book came out in order to avoid seeming like he was representing others, yet while neither of them claim to represent all Muslims, they still receive hate mail from those who disagree with their opinions. Non-Muslims have lobbed criticism as well. Recently columnist Andrew Bolt expressed disdain for Aly, saying he’s used by the leftist media to persuade Australians not to fear Muslim groups at home and abroad.

Carland’s own perception of Islam took a unique journey. Her ancestors were on the first fleet of (non-indigenous) people who founded Australia, and Carland herself was born and raised in Melbourne as a Christian. She initially started looking into Islam out of “polite interest.” She recalls, “After getting past my knee-jerk reaction of ‘Oh no, no, evil, sexist, disgusting religion,’ the more I read, the more I felt: ‘There’s something there.’” She converted to Islam at age 19, despite her mother’s vehement objections.

Today Carland is finishing a Ph.D. looking at the way Muslim women fight sexism by using their religion in defense of feminism rather than as a hindrance to it. She is currently on leave from teaching gender studies, politics and sociology, with a focus on Muslim women and Muslims in Australia, at Monash University.

“She’s able to take stories of women in the Qur’an and make them applicable to men and women today,” says Saara Sabbagh, the creator of the Muslim women organization Benevolence Australia, who has been friends with Carland for twenty years. “She’s able to revive female scholarship in a way that hasn’t been done. Muslim women have not felt safe within their own faith in the sense that it has been interpreted by men for so long … Susan brings a reconnection to the divine for the modern Muslim woman. I believe she is going to be one of the most influential women in Australia.”

Soon after she converted, Carland’s friend tried to set her up with Aly. After meeting up with him she says she told him, “Listen, I wouldn’t marry you if you were the last man on Earth.” She laughs, recalling this now, 12 years into their marriage. Carland explains she was still dealing with turmoil in her family, and her mom had once declared she’d rather Carland marry a drug dealer than a Muslim. But once Carland realized she was comparing every man she met to Aly, she got back in touch and the two were married in February 2002. Her mom gave a loving speech at the wedding about how she always knew the two were meant for each other.

The son of Egyptians who moved to Australia in the 1960s, Aly grew up in Melbourne, and when he wasn’t immersed in music, he was playing sports. Ever the “think tank,” he explains that in Australia, sports transcend class and race. “If you were good at sport then you belonged,” he explains. “It was my social capital.” In 2002, his last year at university studying law and engineering, he began writing for mainstream newspapers across the country about Muslim-related affairs. He worked as a lawyer for a few years and published a provocative book arguing that ignorance from both Islam and the West was causing dialogue between the two to fail. His current Ph.D. work at Monash University is based in terrorism studies, and his dissertation tries to develop a social theoretical explanation for global terrorism.

In 2009 Carland’s broadcast career took off and today he has a two hour radio show on ABC (Australia’s national public broadcaster) Monday through Thursday and a Sydney Morning Herald column, and hosts two TV news shows on Friday and over the weekend.

Two kids later, the couple still gives off a newlywed glow. Their personalities are complementary; Aly is the dignified and mellow calm to Carland’s frenetic and happy energy. They both have witty and engaging senses of humor, and even produced a Muslim comedy sketch show together for a few years, which ran on national television.

Yup. Perfect dinner party guests. Although be forewarned, you may have to cede the spotlight to this dynamic duo’s triple threat of charm, intelligence and spirituality.

OZY is a daily digital news and culture site, covering everything from politics to foreign and national affairs, science, arts and culture, always with an eye toward ‘the new and next.’ For more breaking news content, visit ozy.com.