Should Christians take sides in the on-going immigration debate? U.S. Catholic bishops have have called for “a path to citizenship for the 11-12 million undocumented in the country; a temporary worker program to allow migrant workers to enter safely and humanely; and family-based immigration reform which allows families to be reunited more quickly.” 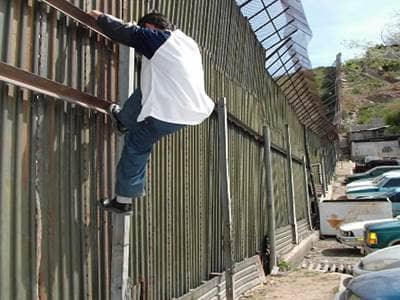 Should Christians take sides in the on-going immigration debate? U.S. Catholic bishops have have called for “a path to citizenship for the 11-12 million undocumented in the country; a temporary worker program to allow migrant workers to enter safely and humanely; and family-based immigration reform which allows families to be reunited more quickly.”

They have been joined by some evangelicals. “We are announcing the Gospel that welcomes the stranger and we will denounce those that block immigration reform,” writes Michael Wilker, senior pastor of Capitol Hill’s Church of the Reformation, in a guest column in the Washington Post. “Some would call them fighting words; others, a declaration of faith.”

On the other hand, Catholics and evangelicals alike are wary of some proposed legislation: “I'm concerned about how the Catholic bishops and other Church leaders have jumped onto the immigration reform” cause writes a contributor on at least one Catholic forum. “I feel like they are supporting what they want and hope is in the bill rather than what is actually there.”

“It's deja vu of the Obamacare bill,” continues the forum commenter. “So many Church leaders put their support behind that bill because it was advertized as being compassionate. They supported the idea of healthcare for all, but didn't actually look at the details (no one did). Those who opposed the bill were vilified and labeled as uncompassionate. And now the Church and businesses are fighting multiple battles like the HHS Contraception Mandate which never would have been a problem if Obamacare was shot down in the first place. And I'm sure there are many more surprises in that law which will pose challenges to religious liberty (abortion, end of life issues, etc).”

“I just see history repeating itself with the immigration reform bill. What authority and power are we handing over to the government in this bill? What's hiding in those pages of legalese? What new battles will the Church need to fight if this bill becomes law? I don't know the details of the immigration bill, but I do know this – it was written by lobbyists for the benefit of special interests that keep politicians in office. Politicians will say anything and use any group as pawns to get the bill passed regardless of what is actually in the bill.”

So, why has the U.S. Conference of Catholic Bishops chosen sides in the debate? “In its history, America has experienced many immigrations as waves of men and women came to its various regions in the hope of a better future,” wrote the late Pope John Paul II in his Ecclesia in America. “The phenomenon continues even today, especially with many people and families from Latin American countries who have moved to the northern parts of the continent, to the point where in some cases they constitute a substantial part of the population.”

“They often bring with them a cultural and religious heritage which is rich in Christian elements,” continues John Paul’s apostolic exhortation. “The Church is well aware of the problems created by this situation and is committed to spare no effort in developing her own pastoral strategy among these immigrant people, in order to help them settle in their new land and to foster a welcoming attitude among the local population, in the belief that a mutual openness will bring enrichment to all.”

Opponents, particularly those against amnesty for those already in the U.S. illegally, say leniency “undermines the rule of law, encourages more illegal immigration, and is inherently unfair to individuals around the world who are patiently waiting in line – often for years – to legally immigrate to the United States!” notes FAIR, the Federation for American Immigration Reform.

“The United States cannot even absorb the current level of legal immigration, which adds roughly 1.1 million workers (the equivalent of the city of Dallas) to the U.S. labor market each and every year,” says FAIR. “Approximately 22 million Americans are currently unemployed or underemployed, both in high-skilled and low-skilled fields. Guest workers take job opportunities from American workers, discourage Americans from entering certain fields, and depress wages. Immigration policy should prioritize American workers first.

America’s Catholic bishops say migration is a major theme in the Gospels. They note that Jesus and the Holy Family were refugees who fled the terror of Herod and sought refuge in Egypt. During his ministry, Jesus had “no place to lay His Head” and taught us to “welcome the stranger,” for “what you do to the least of my brethren, you do unto me” (Matthew: 25:35-41).

In “Strangers No Longer: Together on the Journey of Hope,” the bishops joined with Mexico’s bishops to issue a pastoral letter that took stock of what’s happened in the field of immigration, explain authors Todd Scribner and J. Kevin Appleby in their book On Strangers No Longer: Perspectives on the Historic U.S.-Mexican Catholic Bishops' Pastoral Letter on Migration.

“Simply put, say Scribner and Appleby, “the bishops decided to apply the Bible’s core values such as human dignity, solidarity and the common good to the issue.”

“In 2012,” they note, “Pope Benedict XVI applauded the bishops’ support for migrants when he declared that ‘The Catholic community in the United States continues, with great generosity, to welcome waves of new immigrants, to provide them with pastoral care and charitable assistance, and to support ways of regularizing their situation, especially with regard to the unification of families.’ He also stressed that a particular sign of this is the long-standing commitment of the American bishops to immigration reform.”

“Achieving comprehensive immigration reform today is of central importance to the bishops’ activities in the public square,” writes Appleby, who asserts that the Catholic Church, perhaps more than any institution in the United States, has a vested interest in immigration reform. “Only through such reform will we be able to adequately show respect for human dignity and better protect the interests of our country.”

“One way to decrease the amount of illegal immigration into the United States, an issue central to the immigration debate, is by addressing the root causes that drive such migration,” writes contributor Don Kerwin a contributor to the book. “Most people migrate due to a combination of need, wish to improve the prospects of the families, and desire to realize their potential.” He says if we “enable people to do this in their home country, they will be less likely to migrate illegally.”

But there are enormous problems with proposed immigration bills, say opponents. “Buried deep within the immigration bill are hidden multimillion-dollar slush funds for left-wing nonprofit groups to provide services to the estimated 11 million illegal immigrants now in the U.S.,” says Investors’ Business Daily. “Once enacted, the slush funds would total almost $300 million over three years and grow over time.”

That’s one reason Mexico wants the U.S. to reform its immigration restrictions, reports Front Page magazine. “The U.S. should accept more low-skill migrants from Central America, because otherwise the migrants would stay in Mexico. If they can’t get into the United States, they’re going to stay in Mexico, creating a burden for us that we have to carry, Jorge Castañeda said on Al Punto, a Spanish-language show on Univision. He’s a former member of the Mexican cabinet.

“The U.S. needs to provide more temporary work visas to ensure that these illegal immigrants become U.S. citizens, rather than a ‘burden’ that Mexico will have to deal with,” Castañeda said. “I think Mexico should raise its voice much more clearly and forcefully to say that if the United States wants a wall, it needs to have more doors in this wall, with more bells at these doors so that Mexicans and Central Americans can enter the United States with papers.”

“Refugees are individuals who are forced to flee their country due to the fear of persecution due to their race, religion, nationality, or political opinion,” write Scribner and Appleby in On Strangers No Longer. “In 1952, Pope Pius XII stated that the Holy Family is the archetype of every refugee family because they were forced to escape from the fury of King Herod. If anything does, this highlights the seriousness that the Catholic Church gives to refugee protection.”

Scribner and Appleby continue: Victims of human trafficking are deprived of their rights and of their human dignity. Through sexual slavery, the body becomes little more than an object to be exploited. For victims of forced labor, the body is made into a disposable machine, made to work long hours for little or no pay and for the profit of others. In both cases the person who is enslaved is treated as an object for another’s benefit.

“Issues such as migration, refugees, and human trafficking are not going to be solved today or tomorrow,” say Scribner and Appleby in On Strangers No Longer. “They’re complex issues with even more complex root causes. But every day, Catholic bishops advocate for reform because it’s what the Gospel calls us to do. ‘For I was hungry and you gave me something to eat, I was thirsty and you gave me something to drink, I was a stranger and you invited me in…’ (Matthew 25:35).”