What can two Diwali narratives tell us about living our lives today? 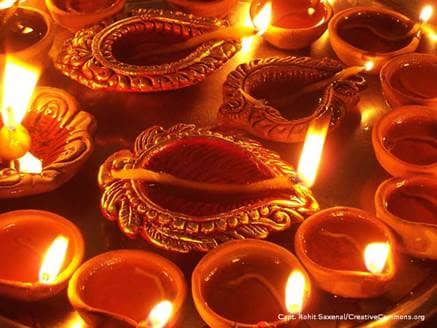 When I was a child, every Diwali night before going to bed, our family did something which I thought was extraordinary. We unlocked and slightly opened the doors to our home. (That may not seem so extraordinary to some of you, but growing up in New York City it was!) The reason, I was told, was that so on this night, Laksmi the goddess of fortune could freely enter and bless our home with prosperity. In my childish way, I imagined Laksmi to be something like a more selfless version of the tooth fairy… leaving coins for us on the altar.

As I grew into an adult and embraced the path of Bhakti, Diwali became more focused on the narrative of Lord Ramachandra – the Divine in the form of an exemplary king – returning home to His kingdom of Ayodhya.

This evening’s celebration focuses on these two personalities, Laksmi and Rama. I’d like to invite you to reflect on the deep and esoteric connection between these two aspects of Diwali this evening.

The basic story of Lord Ramachanrda, which is known as the Ramayana, is that Rama’s beloved wife, Sita Devi, was kidnapped by the demon king Ravana. Rama valiantly rescues her, liberates the people from Ravana’s demoniac rule, and returns home to Ayodhya, where the citizens have lit the city with candles in celebration of His return. And while there is a historical significance to these events, there is also rich symbolic meaning. Who is Rama? Rama is the supreme embodiment of dharma, spirituality, righteousness, our very essence. Who is Sita? Sita is the same Laksmi Devi we celebrate as the goddess of all fortune, all auspiciousness. And who is Ravana? Ravana – his name means “he who delights in making others cry” – is the personification of the bases instincts – lust, wrath, envy, greed. He is the personification of exploiting others. The Ramayana is the story of how Ravana wanted to enjoy Sita, wanted to enjoy the wealth and prosperity and fortune, without Sri Rama. And the whole Ramayana is about the epic quest to reunite Rama and Sita, to have fortune and dharma side by side once again. If we look at all of the other characters in the story, they are all either trying to help Rama reunite with Sita, or keep them apart.

What might this tell us? What might it mean to us in the age of Wall Street greed and Bernie Madoff, and an economy in which many of us are struggling to catch even a fleeting glimpse of Laksmi?

Well, maybe it can remind us that while its easy to point the finger at the Ravanas on Wall Street, maybe there are a few Ravanas on main street too. Maybe there is a Ravana within each of our hearts that sees an opportunity to capture Laksmi – prosperity and fortune – even at the expense of exploiting, cheating, or hurting others.

This evening, in honor of Diwali, we can choose an alternative. We can choose to commit our lives to reuniting Rama and Sita, to seeing prosperity and fortune in their relation to Dharma. If we are struggling, we can take that struggle as an opportunity to re-valuate our priorities, to discover the real wealth is not in possessions or currency, but in our relationship with God and our relationship with His creation. If we have been blessed with wealth or resources, we can – we must – see it as a gift from the Divine, to be used responsibly and in the service of God and one another. Rather than to exploit, we can choose to serve.

Today is also a very special day for me, because it is the anniversary of the day that my parama guru, His Divine Grace A.C. Bhaktivedanta Swami Prabhupada, left this world. In he Hindu tradition the passing of a great saint is regarded as equally auspicious as his or her birth – for in either instance, it is a celebration of a life of service and unconditional love. Prabhupada, and others like him – some famous, some practically unknown – show us that to live a life dedicated to serving others, to reuniting Rama and Sita, is actually possible.

(Originally delivered as an address at Princeton University’s Diwali at the Chapel event, November 14, 2009)