Throughout the Gita, Lord Krishna does plays with our expectations of what God should be, what we are called to be, what the relationship between the two is. 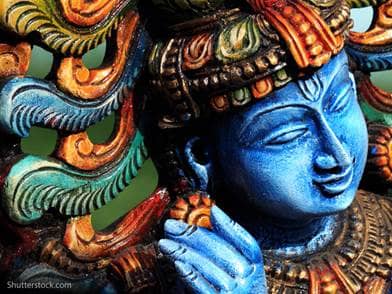 O Arjuna, great conqueror of wealth, there is no
truth superior to Me. Everything rests upon Me, as pearls are
strung on a thread.

This verse is one of my all-time favorites. I love the imagery and the aesthetics of it. And I am amazed that in a few short words, Lord Krishna is able to convey a message that is at once bold and direct, and yet also layered with subtleties and nuance. I love the way that the Gita reconciles ideas that – at first blush – seem to be paradoxical.

Krishna’s claim that there is no truth superior to him, may rub us the wrong way. It may sound exclusivist, dogmatic, unreasonably demanding. Many of us have been happily reading through a sacred wisdom text like the Gita or the Bible, only to come across a God who hits us with this sort of cosmic “my way or the highway (to hell?)” …and have checked out of religion entirely as a result of it. And while Hinduism is often celebrated as promoting pluralism (and it does), it also has its fair share of religious “truth claims.”

The brilliance of this verse, to me, is that Krishna doesn’t stop there. He gives Arjuna (and us) a vivid analogy to appreciate his claim in a deeper way. To say that God is the thread upon which we, the individual pearls, are strung, carries with it some profound implications.

First, it tells us that the Divine doesn’t express his supremacy through cruel, tyrannical demands for submission. He is ever-present, providing the foundation upon which we can rest. There is a comfort there–we are not lonely pieces floating aimlessly adrift some ocean of meaninglessness. We are supported and loved, an intrinsic part of the greater whole.

Second, it reminds us that there is a connection between all of us. As disparate as we might seem, as much as we experience the world and our journeys as individuals, the Divine is there as the unifying, common factor. We are people with stories, bound together in the struggle and pain and joys of love–bound by the Divine source of us all. And just as the necklace is considered well-made when the thread tightly binds each pearl to the other, when each stone is close to the other, our perfection is found in how we can fill those gaps between us.

Third, it tells us that we are precious. Krishna is intentional (and maybe a bit humorous) in calling Arjuna by the epithet Dhananjaya, the “conqueror of wealth.” Could it be that in a world that puts a premium on wealth – money, cars, and yes, jewels – the real treasure waiting to be discovered is us, the self within and the people around us?

Finally, here Lord Krishna displays an attribute of the Divine that we don’t often see: a sense of humility.

We are the shining pearls, the jewels seen and appreciated by others; he is the thread, simple and unseen, performing the thankless task of holding everything together. A beautiful necklace is one in which the pearls get the praise; nobody compliments the thread. There is something awesome about a God who is content to remain invisible, who is glorified by allowing his creation to receive the glory. And it gives us a hint of how we might aspire to be. It reminds us how sacred and powerful of a force humility truly is.

Throughout the Gita, Lord Krishna does this–he plays with our expectations of what God should be, what we are called to be, what the relationship between the two is. He turns things on their heads and inspires us to see the world in a different way.